From the Indian Ocean, approaching Australia after a six-month, nonstop circumnavigation, Sydney to Sydney:

“Despite the fact that today started with a knockdown, a wet bunk, a headache and some pretty huge seas, I’ve had a great day. I know the words knockdown and great don’t belong in the same sentence, but right now I’m feeling better than I have all week. And I don’t mean that I’ve been feeling lousy all week, I mean that right now I’ve got sore cheeks from smiling all afternoon. The wind started coming up yesterday and sat on about 35 knots all night . . .

“It’s Anzac day so I’ll take a minute to think about all our soldiers away from home and maybe I’ll have a crack at making some Anzac cookies.” Jesse Watson

From the Mediterranean Sea and Semaine Olympique Française, where light winds hobbled the competition:

“Match racing is looking great as an Olympic sport, because generally we can race more often than the other fleets—whether it’s too windy or too light for others, we’re still typically racing. We got 11 races off Sunday, whereas only 4 of the other 13 fleets got even one race. That’s aside from the fact that it’s a fun part of the sport to watch.” Jenny Tulloch

From Lake Traunsee, Austria, where RC 44 match racing is about to launch:

“After a quick trip to Moscow on Sunday and Sochi yesterday, to work on a Russian Louis Vuitton Trophy event in 2011, I arrived in Austria late last night. We trained with our partners on Artemis. I felt a bit rusty, probably the 30 hours of flying since Saturday didn’t help.

“Tomorrow is the weigh-in, so we sauna first thing, as we need to drop 15 kgs as a team.” Paul Cayard

From the Strait of Malacca and the 105-foot trimaran Majan:

“Ali Ambusaidi, who is replacing Yann Reignaud, has the advantage to start with good conditions, as it really helps to get used to the watch system rhythm. Ali is the catamaran instructor at Oman Sail [in Muscat, Sultanate of Oman]. This is not easy for him because, not only is the language on Majan English, but the technical words are also different from those of Hobies. For example, they call “quicker” on a Hobie Cat what we call “cunningham” here…

“But Ali is also lucky because, for the first time since Cape Town, we see the moon, and she is big and round.”

Sidney Gavignet, reporting from the OmanSail-owned Majan, a 105-foot sistership to Thomas Coville’s Sodeb’O, built in the Sultanate of Oman. The boat left Singapore today on the return leg to Muscat after a 16,000 mile circuit, visiting the Maldives, Cape Town, Fremantle and Singapore in the hope of inspiring others to build maxi trimarans and develop an Asian circuit. Oman is a desert country, but its sailors once dominated the Indian Ocean and its monsoon trade links. The stated aim today: “To inspire a new generation of young Omanis to take up sailing as recreation and as a competitive sport.” 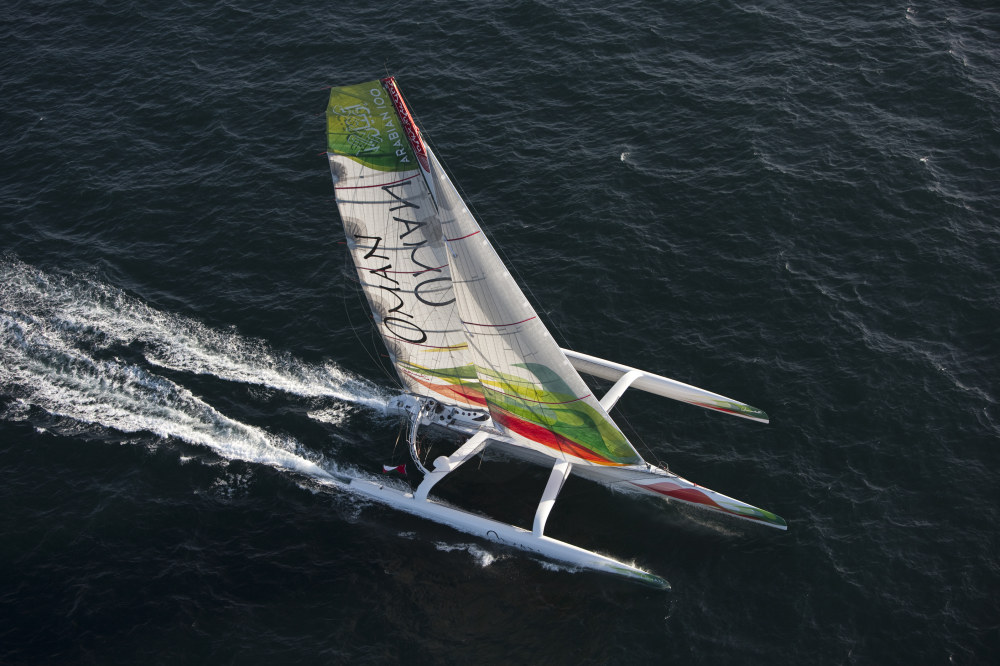 AND NOT TO FORGET

You may knowSpinSheet staffer and sailing coach, Amy Gross-Kehoe, as everyone else in the world of sailing seems to have encountered her on one coast or another. She was US SAILING Sailor of the Week in January. In honor of her battle with brain cancer since fall 2009, a small group of us (the
five of us left in town who are not sailing in the Annapolis NOOD Regatta) are running a 5K next Sunday, May 2, in Washington, DC called Race for Hope DC to benefit efforts to cure this Disease. As anyone who knows her will testify, Amy’s grace and humor in the middle of this tough time have been truly amazing. If you would like to make a donation, here’s
an opportunity. Even a modest donation will make a difference. Thank you! — Donation link: HERE.