24.6 Knots Around the World

Fair to say, many a lifelong sailor has never experienced 24 knots on a boat.

Also fair to say, it takes a lot of 30-plus to turn out an average like that while logging 28,523 miles.

On a new circumnavigation record.

Which will, however, be computed for official purposes using, not the actual distance sailed, but the shortest-possible route of 21,760 miles yielding—when it becomes official—an average speed of “only” 18.76.

So how good is navigator Stan Honey? Good enough to be the only anglo aboard. (Stan is also known as the guy who invented the software to “paint” the first down line on televised football broadcasts.)

Skipper Franck Cammas and his other-than-Stan French crew entered the English Channel late Saturday night, local time, and by passing the French island of Ushant, completed the record circumnavigation. They took 2 days, 8 hours off Bruno Peyron’s 2005 passage in Orange and set the new mark to beat at 48:07:44:52.

Just yesterday, Coville’s team in France, working on his Sodeb’O campaign, announced that they were close to relaunching Coville’s own big trimaran, now fitted with lifting foils, because, “records are getting harder to beat.”

Last fall, Honey said that Groupama 3, blessed with optimum luck, was capable of a 45-day passage, but this was a come-from-behind record. Groupama 3 was often running behind the reference times set by Peyron and carried a 500 mile deficit crossing the equator and entering the North Atlantic for home. A spot of bad luck right there would have cooked the goose—in November in the South Atlantic the boat broke an aft beam bulkhead, diverted to Cape Town for repairs, and then returned to France to restart. A miss on the second attempt would have been a bitter pill. But the North Atlantic leg was golden, six straight days going fast, and in.

Peyron will be on hand in Brest to welcome the crew upon their arrival on Sunday morning.

QUOTES AT THE DOCK:

Franck Cammas: ” We ended up with a great time, certainly better than we could have expected after crossing the equator with a day’s deficit. The image which stays with us is the rounding of Cape Horn. We were like kids.”

Stan Honey: “my work involved a great deal of course selection so I can’t say that my French has improved, though I’m sure that the onshore weather router, Sylvain Mondon, and Franck have been able to improve their English with me. It’s an incredible honor as an American to have been invited to be part of this. French multihull sailing is the pinnacle of world sailing.”

Click here to go along for part of the ride.

ALL AT SEA, PLASTIKI

With Rothschild are co-skippers Jo Royle and David Thomson, Olav Heyerdahl (a Thor Heyerdahl descendant; think Kontiki/Plastiki) and cameramen Vern Moen and Max Jourdan. Their goal is to dramatize the waste of single-use plastic and its damage to the oceans. They’ve been getting ink, so who knows, maybe it will help.

But that was before they hung the rudder on a crabpot in the dark and had to go under the boat to clear it, and got becalmed, and moved on to the first of what could be 100 dinners at sea.

As they cleared the Golden Gate, we looked like this to them . . . 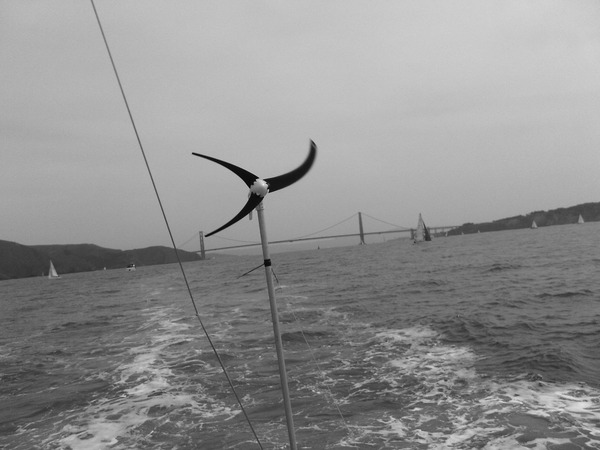 Quote of the day: “The future is bright and now that America’s Cup 33 is behind us, we can move forward in a collaborative way with the new Defender and Challenger of Record to shape the future.” Paul Cayard, skipper of Artemis

The Kiwi boat extended on every leg of the deciding five-mile race off Auckland’s East Coast Bays against the Mascalzone Latino Audi team representing Club Nautico di Roma, which is the Challenger of Record for the 34th America’s Cup.

Emirates won the first race yesterday, and with their second victory today they went 2-0 in the Finals, which race officials shortened to a best-of-three contest due to light and uncertain winds.

Right after the finish, the normally controlled and contained Emirates skipper Dean Barker had a broad smile on his face as he soaked his veteran team with champagne from a jeroboam of Moët et Chandon, not even sparing an event photographer who had climbed aboard for the occasion.

On their way to the finals, Emirates survived by one second a heart-stopping last-minute penalty turn in their match against Azzurra, the other Italian team. Today they left no doubts with a composed and clinical performance that saw them threatened only once.

Ashore after racing it was a flashback to the glory days of the America’s Cups of 2000 and 2003, as crowds thronged the quayside in the Viaduct Basin and spectators crowded every vantage point on the moored boats and surrounding balconies.

Horns, sirens, cheers and applause greeted the Mascalzone Latino Audi boat as it docked at Market Square, its crew brandishing a giant banner that read “Thank you New Zealand.”

The Emirates boat arrived to more applause, flying a gigantic New Zealand blue ensign plus smaller national flags of all the competing countries.

Before presenting the Louis Vuitton Trophy, Yves Carcelle, chairman and CEO of Louis Vuitton, congratulated Dean Barker, his team, and all the competing teams on the quality of their racing. “Now I hope the Cup will revive. In the meantime, we have seen in the last few days an amazing sport competition. The fact that the boats are equalized means that it was all up to the teams and one more time, Team New Zealand has proved its domination.”

After the strong south-westerly winds that have characterized much of the regatta and forced the postponement of some races, there was a two-hour wait for wind today as the spectator fleet built in size. Racing started at noon at the mouth of the Rangitoto Channel in a warm and shifty 10 to 12-knot westerly breeze.

Barker wanted the right side of the course before the start. Gavin Brady, the Kiwi skipper of ML Audi, wanted the left, and the pre-start was uneventful as they split away, even before they crossed the line. Brady’s tactician Morgan Larson said later that they realized in the last minutes before the gun that the right was favored but they had no option but to follow their game plan.

The left finally paid off in the closing stages of the first leg, pulling the visitors back into the game. As they closed, Emirates chose to tack short of the port tack ML Audi, only to be carried out beyond the starboard tack layline by the aggressive Italians.

Brady had his opportunity to level the score and the boats were bow to stern as Emirates led around the weather mark. The Kiwi spinnaker blossomed instantaneously in a slick set the Italians couldn’t match. Just as swiftly, Emirates gybed over into the favoring left shift, catching the Italians flat-footed. Within seconds the home team enjoyed a four-boat length lead, one they never relinquished. The finish margin was 53 seconds.

“On the first beat, it didn’t look as though the right was going to come in early enough for us and it was amazing how the pressure came in and we had enough to be strong,” Barker said. “The guys did an amazing job. The first downwind was the key moment for us . . . to get the early gybe away and make a little gain there.”

Noting that his team had lost two races in the two weeks, Barker added: “It’s always satisfying when you feel that you’re sailing your best on the last day, and today we were sailing really well.”

Morgan Larson acknowledged the flawless performance of the New Zealand team. “We got a little bit of a miscommunciation in the back of the boat at the weather mark and I’ll hold my hand up for that one,” he said. “If we’d gybed with them, we’d have been right on their tail.”

The overall results are: