Solo in the Pacific

Solo sailors under way from San Francisco to Hanalei Bay are finding the breeze slowly filling in for them today, after a spell of difficult going in light air. George Lythcott on the Express 27, Taz, noted that some of his fellow racers had begun questioning whether or not they’d make the race banquet on July 9. There’s never a guarantee, but things are looking up.

Lythcott logged, “With the slow passage, I’m starting to take stock of supplies. 2 apples, 10 oranges, 10 gallons of good bottled water, 12 gallons of water in a bladder. I have been drinking the latter every once in a while, to see if it will make me sick. It is less than clear and tastes of plastic. So far, so good.

“My head seems clear, but if it wasn’t, would I know it?”

Jeff Lebesch on the biggest, fastest entry, the 54-foot trimaran, Hecla, should be crossing the halfway point at just about the time this is written on Saturday. He’s been under spinnaker for more than a day.

The north-south spread, meanwhile, could become important. Ronnie Simpson on the 30-foot Warrior’s Wish remains north of the rhumb line, while any veteran of this crossing, with a glance at the layout of the fleet, will likely prefer the positioning of Adrian Johnson’s 30-foot Idefix, some 160 miles south (even though the most recent update showed Warrior’s Wish a few miles better on the distance-to-finish scale). Warrior’s Wish last checked in at 32˚7′ N X 130˚8′ W. Idefix at 32˚3′ N X 137˚3′ W.

That’s a race within a race that I’ll be watching. The animation at passageweather.com looks as if the fleet will have a breeze, but moderate, through Monday. 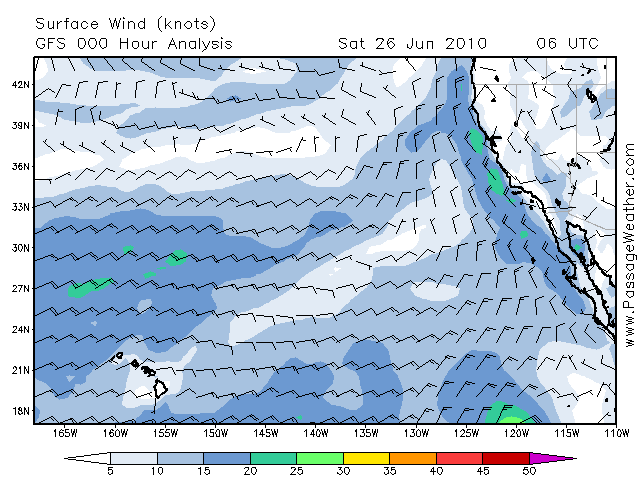