Think, instead, 100 free rides given out and 300 free hot dogs crossing the grill, and I’m calling that a success. This friend of mine who likes to close a conversation by saying, “Now go make something happen,” would approve.

The first followup posting on the BAMA forum came from Stephen Marcoe, remarking how “our members put down their ratings and pulled together as a team.”

(Ratings being a recent hot topic on the forum.) The people at Multihull Expo Day were looking forward, much like this young man, who didn’t hesitate to lean into . . . 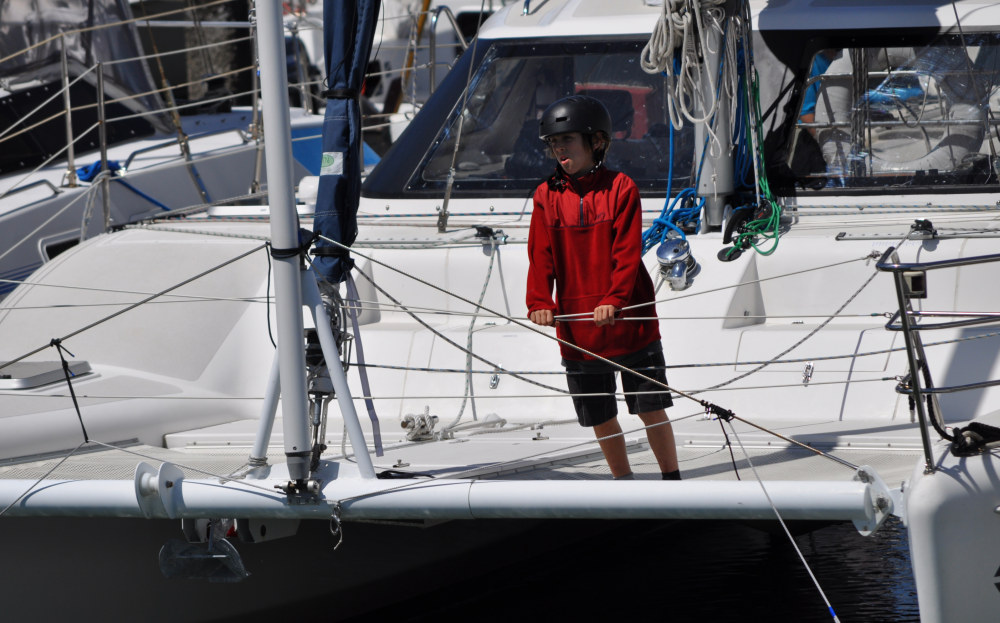 One young man’s boat tour. All photos by Kimball Livingston

This being truly a grassroots deal, the organizers had every right to be pleased when BMW Oracle bowman Brad Webb showed up for rides on small, fast boats. Webb is a Kiwi by origin, living now in the southern part of the San Francisco Bay Area. Not too long ago he spent his time going three times the speed of the wind on a giant, wing-powered tri. On Saturday this was Brad coming back from a Hobie burn . . . 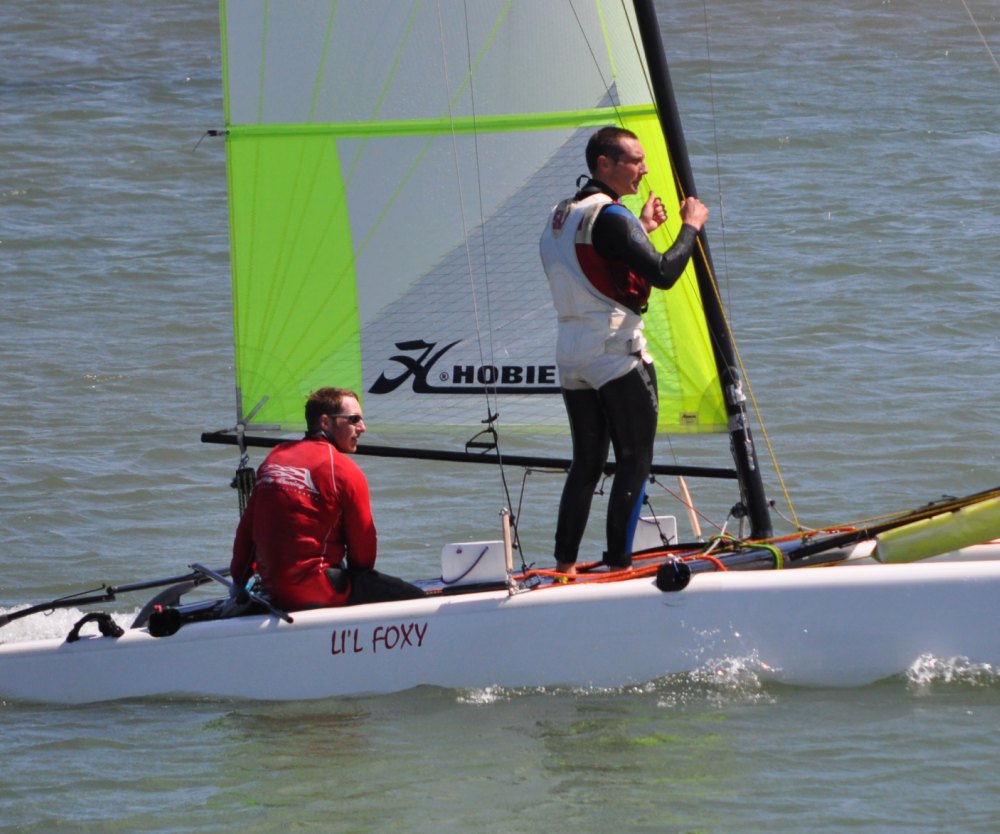 There was plenty of action at the launch ramp . . . 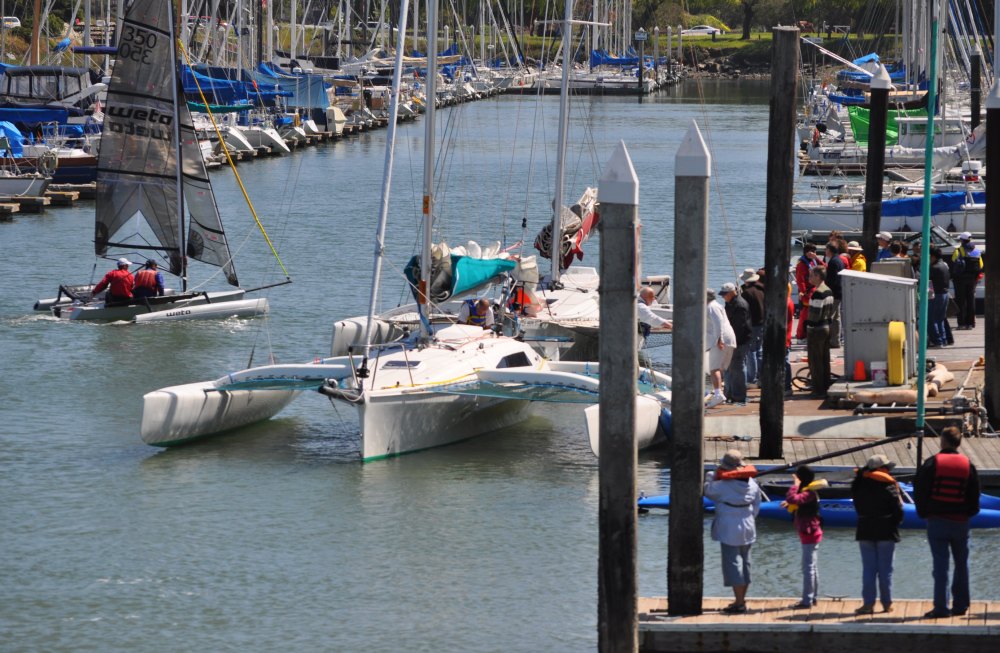 And lots of socializing at the west end of the harbor, where free dogs were on the grill and Coyote Point Yacht Club opened for hospitality . . . 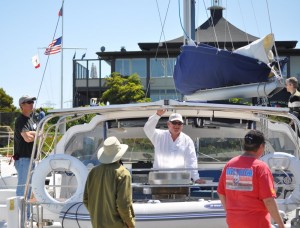 The Bay Area Multihull Association—BAMA as we like to call it—has many dimensions. It organizes the annual Doublehanded Farallones Race, one of the biggest ocean races in California, and it has grown into a member constituency of the San Francisco Bay Yacht Racing Associaiton. When the America’s Cup went multihull, they got just a little bit excited and inspired. This bring-our-boats, show-our-boats, take’em-for-rides notion was hatched on the BAMA forum and the enthusiasm was contagious. Steve Keith led the charge.

Dick Newick, John Marples, and Jim Antrim showed up, and of course, it wouldn’t have been a boatshow unless the biggest boat there drew the biggest crowd . . . 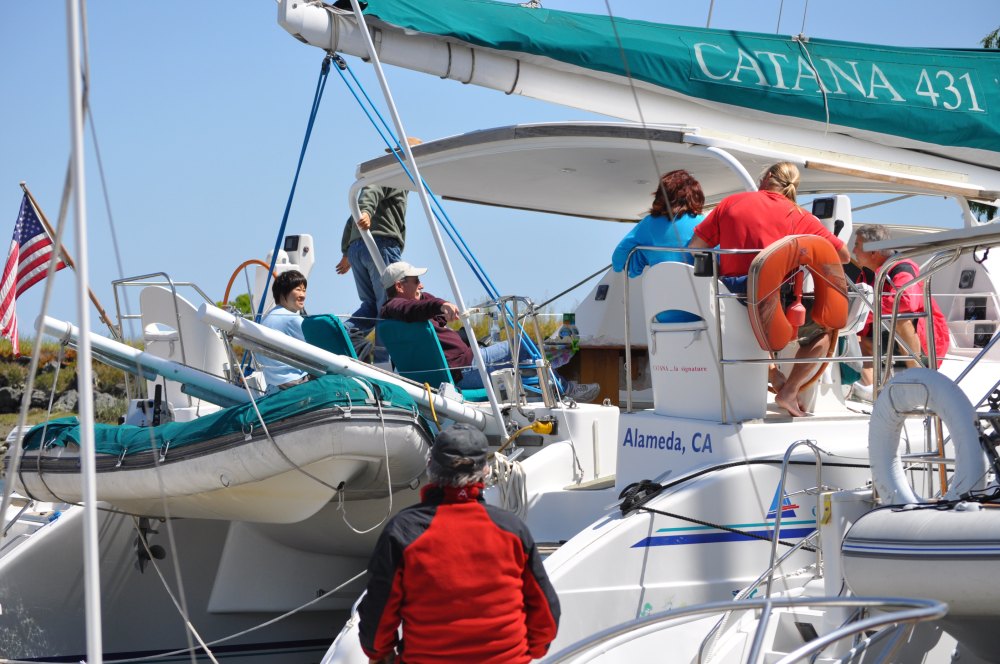 So that’s my report from one fix on the latitude/longitude scale as I dash out the door for opening day on San Francisco Bay. Wherever you might be at the moment, thanks for reading. Now go make something happen.

San Francisco Bay sailors of a certain generation will well-remember Kitty James, who ran the YRA office for a time, then traipsed off to Southern California to join the launch of a sailing rag, Santana, modeled on the success of Latitude 38.

While Santana never came close to matching Latitude in value or readership—nor have any other imitators, for that matter— it had a good run, and now I must let you know that Kitty James passed away over the weekend, a victim of cancer, while the Ensenada Race fleet was on the water. At the awards ceremony, Newport Ocean Sailing Association Commodore Doug Jones opened the proceedings with a tribute.

First finisher of the 63rd edition was LoeReal, a Jeanneau cat home-ported in El Paso, Texas, in 9:52:33. First monohull to finish was Peligroso, a Kernan 69 home-ported in Acapulco. The fleet is too disparate to have an overall winner, but The Watch went to good ole Taxi Dancer, now owned out of Santa Barbara by Dick Compton, Jim Absley and Tom Parker. 198 starters. 192 finishers. 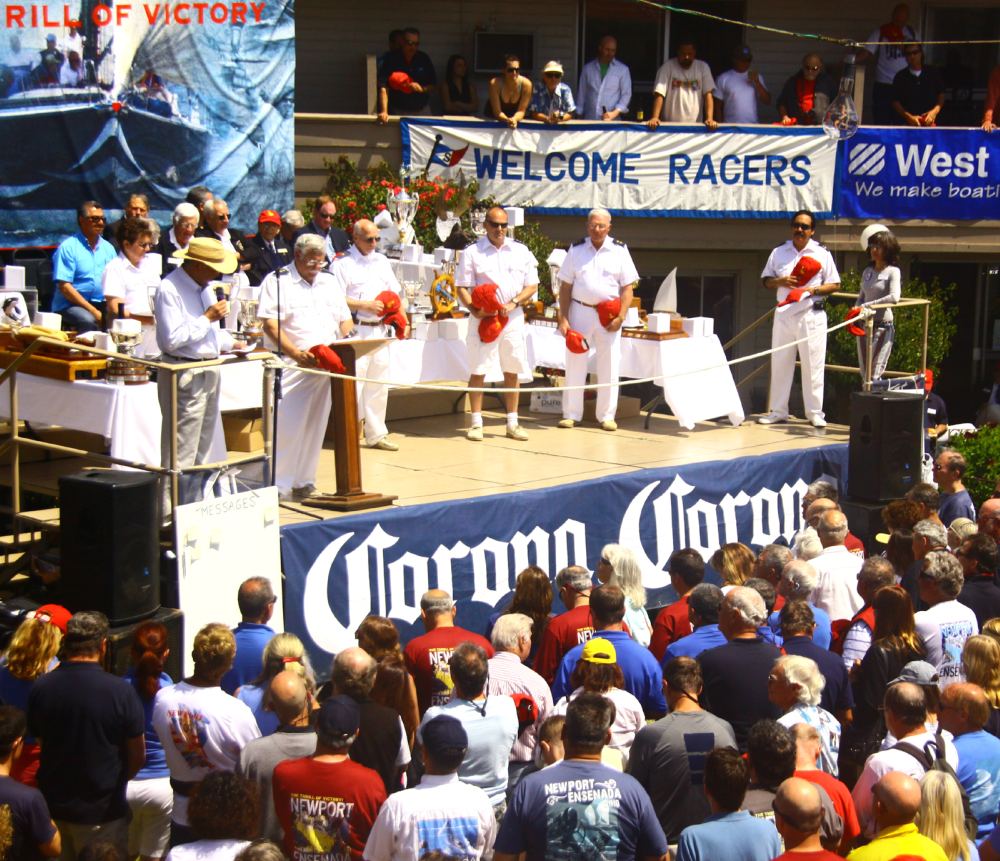 * From Molly Winans, SpinSheet editor:
You may know SpinSheet staffer and sailing coach, Amy Gross-Kehoe, as everyone else in the world of sailing seems to have encountered her on one coast or another. She was US SAILING Sailor of the Week in January. In honor
of her battle with brain cancer since fall 2009, a small group of us (the five of us left in town who are not sailing in the Annapolis NOOD Regatta) are running a 5K next Sunday, May 2, in Washington, DC called Race for Hope DC to benefit efforts to cure this disease. As anyone who knows her will testify, Amy’s grace and humor in the middle of this tough time have been
truly amazing. If Scuttlebutt readers would like to make a Donation, here’s an opportunity. Even a modest donation of $20 would make a difference: Here,