And what rough beast, it’s hour come ’round at last, slouches toward Bethlehem to be born? All photos by Kimball Livingston

Below, friends, is a document that I want on record at the Blue Planet Times. I’ll be referring to it on Monday, when I write the story of the first vehicle ever to go
Dead Down Wind Faster Than The Wind.

Using only the wind.

This is the opening salvo in my account of the DDWFTTW project, and this is the highly-technical submission made to the Board of NALSA, the North American Land Sailing Association, requesting that it ratify a multiple of 2.8 times the speed of the wind, dead downwind, using only the wind.

That record has now been ratified.

I came into this story as official observer number two, which is how I came to make an excursion recently . . . 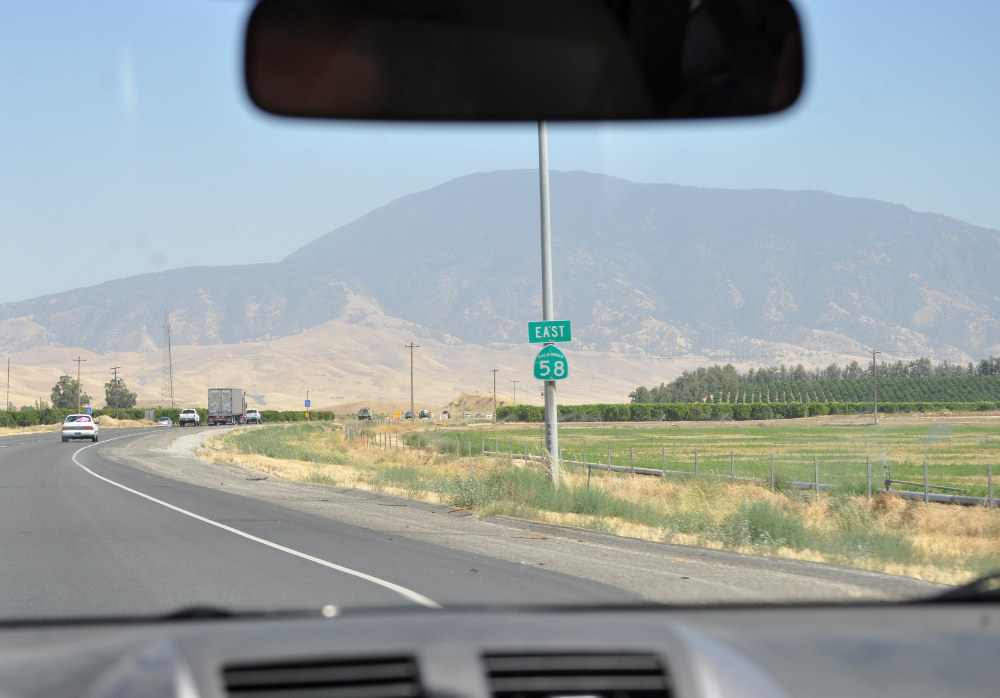 Down half the length of California from San Francisco to the Mojave Desert . . . 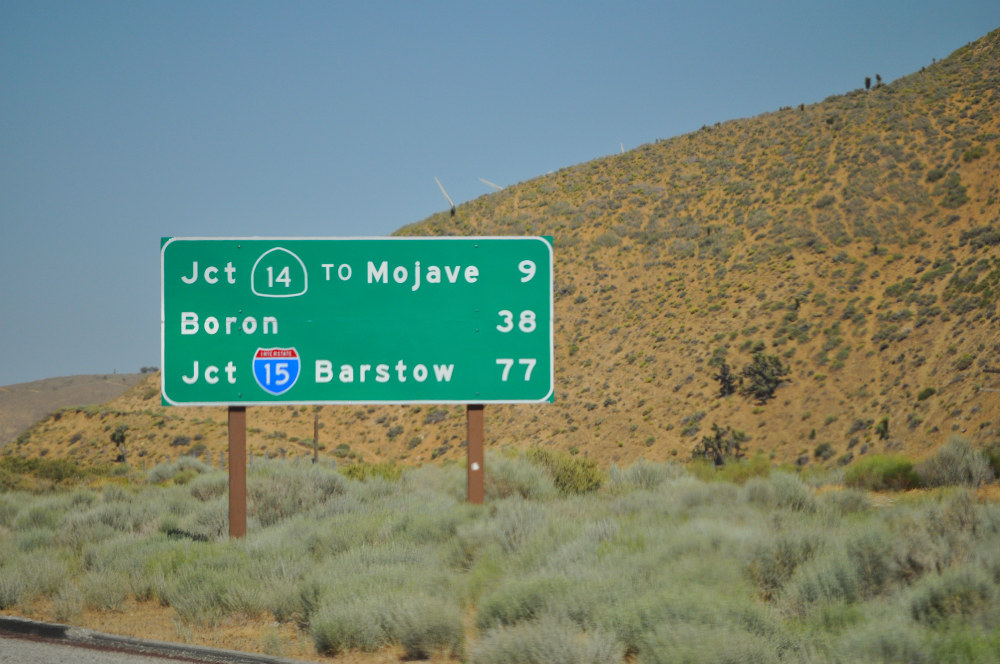 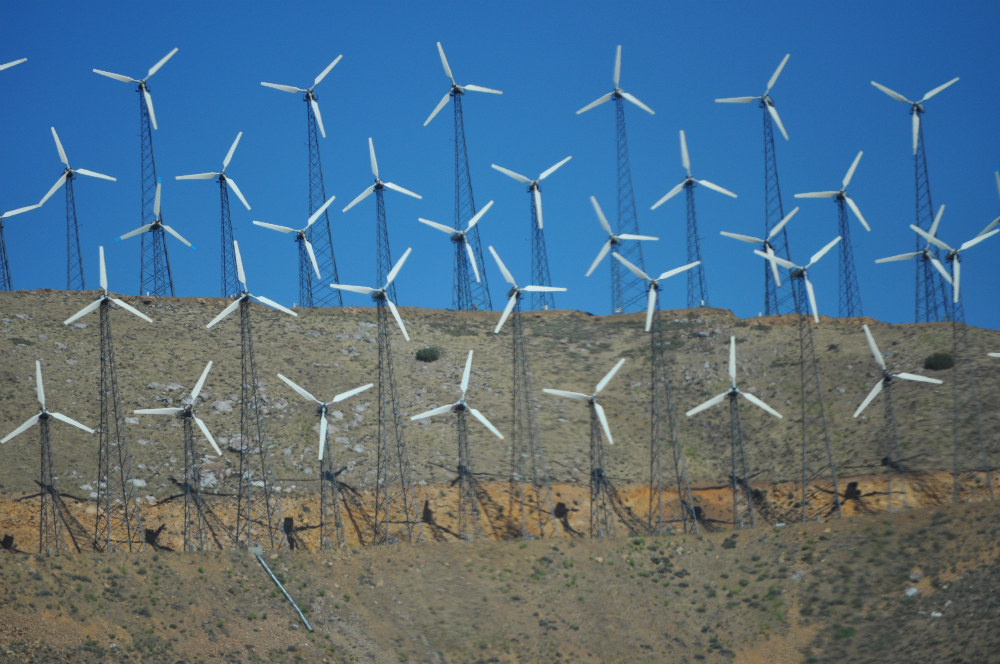 Past the Pleasant Valley State Prison (?) and past not one but two grass fires in the Tehachapis . . . 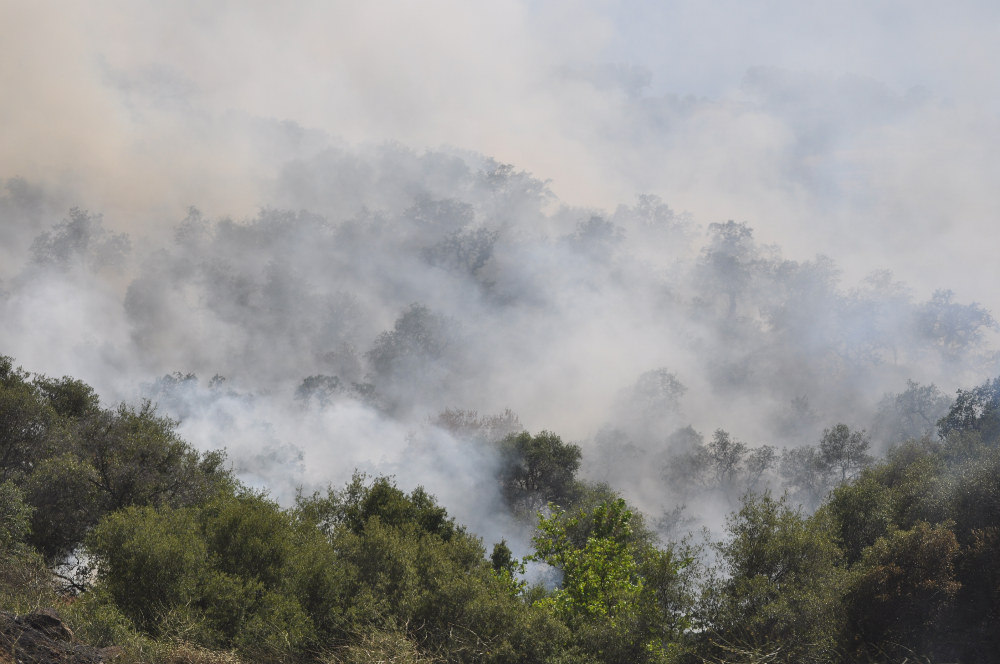 For a quick survey of El Mirage Dry Lake with the Thin Air Designs team . . . 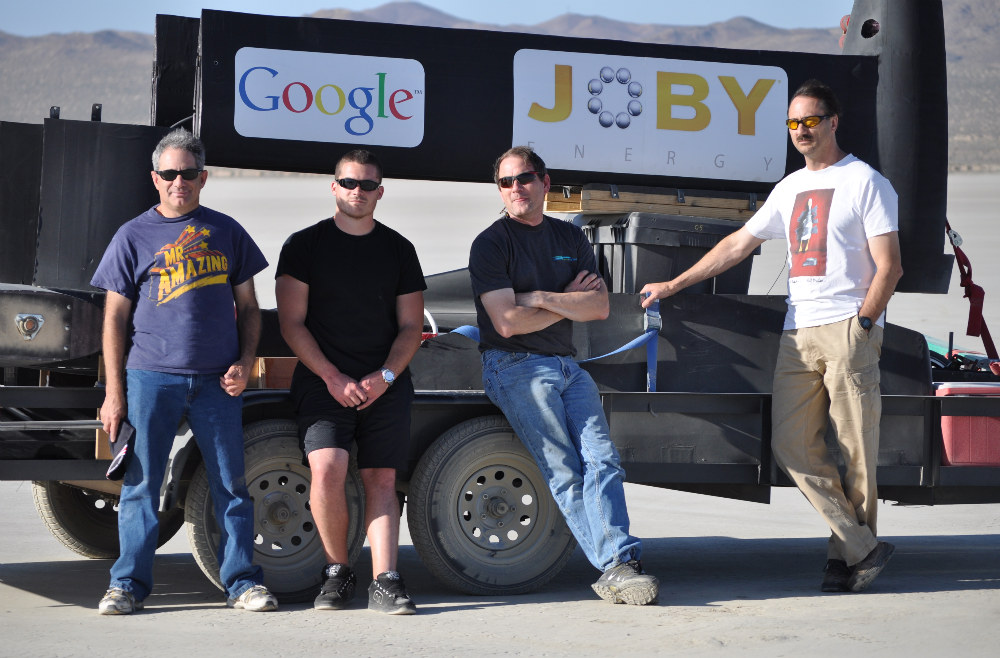 And then to a restful slumber, freeway side . . . 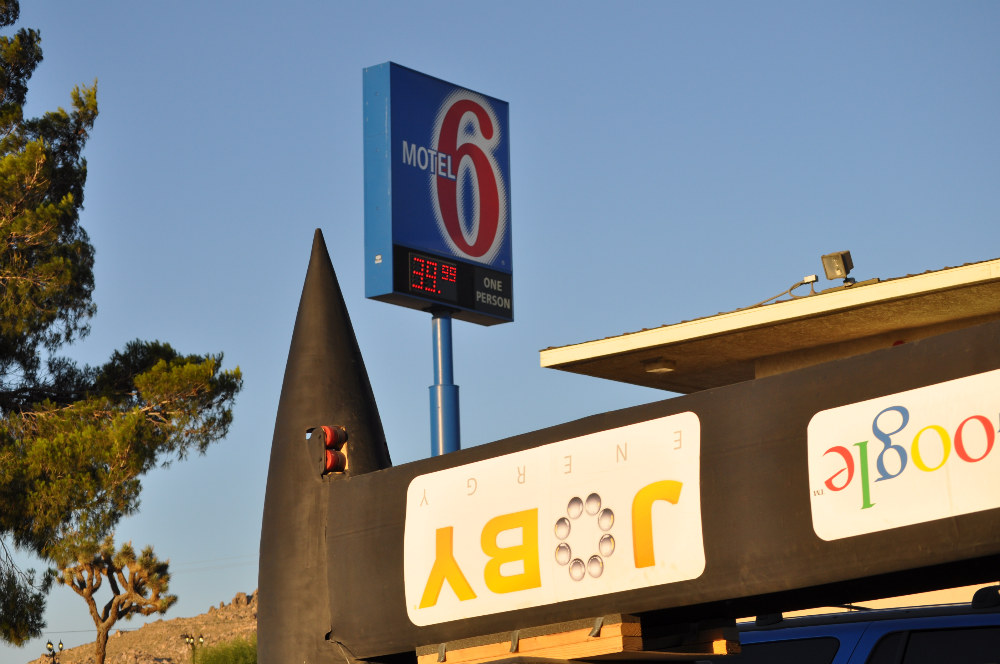 And then back to the dry lake and down to business.

Next, a clear look at the machine itself, and a much-clearer account of what I’m talking about: The mission, the action, the success. Below, the promised document. Good luck with it. I’ll be more anecdotal, next time out.

On July 2nd and 3rd of 2010, the Thin Air Designs team made a number of runs with their wind powered vehicle, the Blackbird, on the El Mirage dry lake bed in Southern California. This was done in a bid to establish the first world record in the category of wind powered vehicles capable of exceeding the wind speed steady state – directly downwind. This report will present the data logged in accordance with the rules for this new category as set forth by the North American Land Sailing Association (NALSA). On hand from Thin Air Designs were:

On hand representing NALSA as official observers were:

Bob Dill – Member of NALSA board of directors
Kimball Livingston – An editor of SAIL, deputized by Mr. Dill

Others on site included Richard Jenkins (world land speed sailing record holder), four engineers representing Joby Energy (primary sponsor of the Blackbird), and several others who had been following the project.

The Blackbird is a vehicle designed and built with the sole purpose of traveling directly downwind, faster than the wind, powered only by the wind, steady state. It has a tricycle configuration and a 17.5’ diameter propeller on the top of a set of pylons over the vehicle’s rear axle. The propeller is connected to the rear axle through a simple chain-drive transmission and ratchets. This configuration permits the wheels to turn the propeller via the fixed ratio transmission, while allowing the prop to freewheel during braking. The prop pitch can be controlled by the pilot “on the fly”. By design, such a configuration cannot be accelerated through the use of stored energy/momentum. The vehicle makes no use of any controls or actuators other than those operated directly by the pilot with human power.

Analysis demonstrating that the vehicle is capable of DDWFTTW

In order to run in this NALSA category it must be demonstrated that the vehicle is capable of going directly downwind, faster than the wind, powered only by the wind, steady state. While this has been a hotly debated topic on the internet, the principle has been demonstrated many times with working models and has been analyzed both by the ThinAir Designs team as well as by noted aerodynamicist Mark Drela. See Drela Power Analysis and Drela DDWFTTW Analysis.

The following case study will demonstrate the principle in simple terms:

Consider a cart with an electric generator driven by the rear axle and a propeller driven by an electric motor. We’ll assume the following reasonable set of parameters:

For the purpose of this analysis we won’t consider the issue of accelerating to speed, but rather the cart’s ability to maintain faster-than-the-wind speed and further accelerate from that point. Thus we’ll tow the vehicle up to a speed of 20 mph in a 15 mph tail-wind and then let it loose. In this situation the vehicle will experience a relative head-wind of 5 mph. We’ll adjust the generator output such that it produces 20 lbs of retarding force at the wheels. This tells us the wheels will be putting power into the generator at a rate of 20 mph x 20 lbs (400 mph-lbs). But the generator will only produce 340 mph-lbs due to its 85% efficiency.

Given our vehicle gross weight of 650 lbs and coefficient of rolling resistance of 0.02, we can calculate that we’ll lose 13 lbs of thrust to rolling resistance. We lose another 20 lbs at the wheels due to the retarding force caused by the electric generator. This leaves us with an excess of 16 lbs (49-13-20).

Finally, we have to consider the aerodynamic drag we experience in this state:

In which rho is air density and vel is the relative air velocity experienced by the vehicle.

The simple explanation is that the vehicle acts as a lever between two media (the ground and the air). Like any lever we can trade a small force over a large distance for a larger force over a smaller distance. This is how we get more thrust from the prop than we create drag at the wheels (since the wheels are moving over the ground faster than the prop is moving through the air –due to the tailwind).

As can readily be seen from the above analysis, the vehicle performance is driven significantly by the prop efficiency. This of course is primarily a function of the Lift/Drag ratio of the propeller airfoil at its operating angle of attack. The propeller on the Blackbird is based on the NACA 6412 airfoil which has it’s maximum L/D at 4.0 degrees, and has a twist such that the airfoil at each spanwise station is presented at that angle of attack (AOA). When the relative flow is aligned with the propeller axis, that AOA can be maintained at all spanwise stations throughout the complete rotation. Any cross-wind component from the right will cause the AOA for the top blade to increase while the angle of attack of the bottom blade is decreased. A cross wind component from the left will have the same effect in the opposite direction. In both cases the AOA will depart from it’s optimum value to varying degrees over the full rotation of the prop in this case – reducing the propeller performance – and thus the overall performance of the cart. The cart employs no other aerodynamic surfaces that can take advantage of a cross-wind component.

It is easiest to review the following data with the use of the “AnaGraph” analytical plotting program provided – but all data is in ASCII format and is described in detail below. The following can be seen by opening “avg_speed_ratio.agr” in AnaGraph.

The subject run begins from a dead stop at 588959.4 seconds (as measured in the DAPS format and used throughout). The downwind cart is pushed by hand (by JB) and released at 588977.0 at a ground speed of 11 mph. From this point the DW cart accelerates monotonically, by wind power alone, up to and through the 10 second measurement period from 589060.8 to 589070.8.

Over this same period, the DW cart averaged a 2.77 multiple of true wind speed, while it’s absolute speed increased from 26.84 mph to 28.81 mph.

Contents of “conflated5.txt” by column

1) Time in seconds (from the beginning of the week I believe). Most of these files have several lines at the beginning with very low numbers for time. This is what happens before the GPS begins to lock. I simply discard these lines completely – there’s nothing interesting on them.
2) Lon in decimal degrees
3) Lat in decimal degrees
4) GPS Speed in mph
5) GPS Heading in degrees (this is NOT in the normal way you’re used to in NMEA strings. This is done in the more typically mathematical coordinates. 0 is a heading of due east. 90 is due north. 180 is due west, and 270 is due south. So it has a 90 degree offset relative to NMEA strings, and an opposite sign.
6) Windspeed in mph (measured by anemometer on vehicle – not true wind speed)
7) Wind Direction in degrees (in the more typical NMEA sense). NOTE however that there is an offset for each sensor given in the readme file. These sensors were intentionally rotated so that the NULL was not aligned with the nominal wind direction to be expected during operation. Measured by anemometer on vehicle – not true wind speed)
8) Lon standard deviation (in degrees – I think)
9) Lat standard deviation (in degrees – I think)
10) Number satellites in solution
11) HDOP Horizontal dilution of precision.
11)VDOP Vertical dilution of precision.
I think VDOP may always zero in these files and is not valid

Dill-5, Dill-7, and Dill-9 are the self-contained logging GPS receivers placed on the downwind cart by Bob Dill