Water. Boats. Dreams. Blue Planet Times is about whatever matters to the subject at hand, our blue planet.

Riding around in motorboats because, frankly, they are, or they can be, so comfy and useful. And if you haven’t noticed, we commend to your attention that you can gauge the importance of a sailboat race by how many motorboats it takes to run it.

We love all boats, great and small. 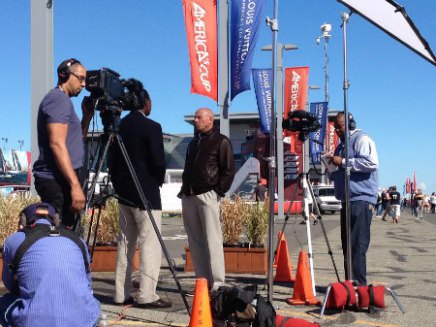 Kimball Livingston is an international sailor, author and commentator offering services in writing and editing, also in public speaking, where he serves a range of corporate clients. From its onetime home of Newport, Rhode Island, Kimball followed the America’s Cup around the world. He covered every America’s Cup from 1980 on and was the foremost contributor to the official book of the 34th Cup, Sailing on the Edge. But when they took the Cup to Bermuda, and away from San Francisco Bay, well, he boycotted that shindig.

Kimball has made a career of doing, then telling about the doing in print and in person.

Within days of finishing a master’s degree he was on the ocean, racing a sailboat to Mexico.

It was a good ride. It made a good story. Too bad it had nothing whatever to do with his field of study.

Much later, recognizing a one-time opportunity in the new millennium, Kimball made it a mission to sail milestone editions of the three classic distance races in America: Centennial Transpacific, Centennial Newport-Bermuda and the 100th running of Chicago-Mackinac. He scored in two out of three.

During the 14 years that he was a yachting writer for the San Francisco Chronicle, Kimball raced high performance dinghies on San Francisco Bay and big boats on the oceans of the world. He has written for nearly every English-language sailing magazine and a few civilian publications, and he’s been translated into other languages, but most of his magazine work has been for Boston-based SAIL. He even visited their office a couple of times. His assignments have taken him to the South Pacific and Asia, Alaska, Mexico, the Med, the Caribbean and Fink, Texas.

Kimball has been a speaker at the distinguished Author’s Lecture Series of the Boston Public Library Foundation, and whenever sailing is a hot button topic, he is a go-to for colleagues in print, radio and television. During the 2013 America’s Cup cycle he was interviewed extensively by NPR and Radio New Zealand, and along with considerable local TV programming, he appeared on the CBS Evening News with Scott Pelley to wrap up the event. Kimball has scripted Emmy-winning documentaries and a feature film — he was one of the writers of the Frances Ford Coppola-produced WIND, starring Jennifer Grey, Matthew Modine, lots of sailboats and lots and lots of wind. It tanked at the box office, only to become a cult item that doesn’t go away. The Whomper is with us still.

But, we can put this in a nutshell: Kimball learned to sail on Lake Pontchartrain with the Tulane University Sailing Club, and he moved west about five minutes after graduation. Thus began a love affair with San Francisco Bay that culminated in the publication of a local classic — Sailing the Bay — in which he promises the reader, “a few hard-won insights from one who has traveled the road from the Marina Green, looking out to that beautiful bay with a prayer, Lord, transport me there.”