ALL HANDS TO THE PUMPS

The most EXCITING sailboat race I ever saw was a match race that went like this:

After the smoke from the finish gun had cleared, I heard someone say, “That was the most BORING thing I’ve ever witnessed. Can we go now?”

The race in question was the fourth race of the 1983 America’s Cup match, in which the afterguard of Liberty, including Dennis Conner, Tom Whidden, and Halsey Herreshoff, spent all five legs of the course rolling the dice on the shifts and winning against the odds, and all the while, Aussie II in chase was going faster through the water. The Defenders put up a bravura performance, with a dash of luck. However, only the gravity of the situation made the race absorbing, and apparently you had to be pretty deep into this sailing thing or you didn’t get what was going on at all.

A few days back I had the opportunity to steam down the San Joaquin River, into the Sacramento River, and on toward the San Francisco Bay as a motorboat passenger along with Harold Bennett, the Kiwi who famously was senior race officer for the America’s Cups in Valencia. High pressure was extending its reach across California, and there was no wind in the river system (not even in Honker Bay). There was no wind in San Pablo Bay, below the mouth of the river, but as we left San Pablo Bay and passed under the Richmond-San Rafael Bridge and the San Francisco skyline came into view, through the binocs I could see boats far ahead, heeling to a breeze in the wind slot.

I recalled “The Chairman” (Tom Ehman, BMW Oracle Racing’s Director of External Affairs) mentioning that, by the team’s research of San Francisco Bay, from spring to fall, “98.2 percent of the time we would be racing at 1 p.m.”

Our course led us across the outbound shipping channel—where San Francisco Bar Pilots, I confidently assume, will guide both inbound and outbound shipping whenever 2013 America’s Cup races are in progress on the cityfront. (If SF Bay is the venue.) The deepest vessels already use this channel both inbound and outbound, so we’re not upsetting anybody’s applecart. It helps make an America’s Cup possible on our restricted patch of water. 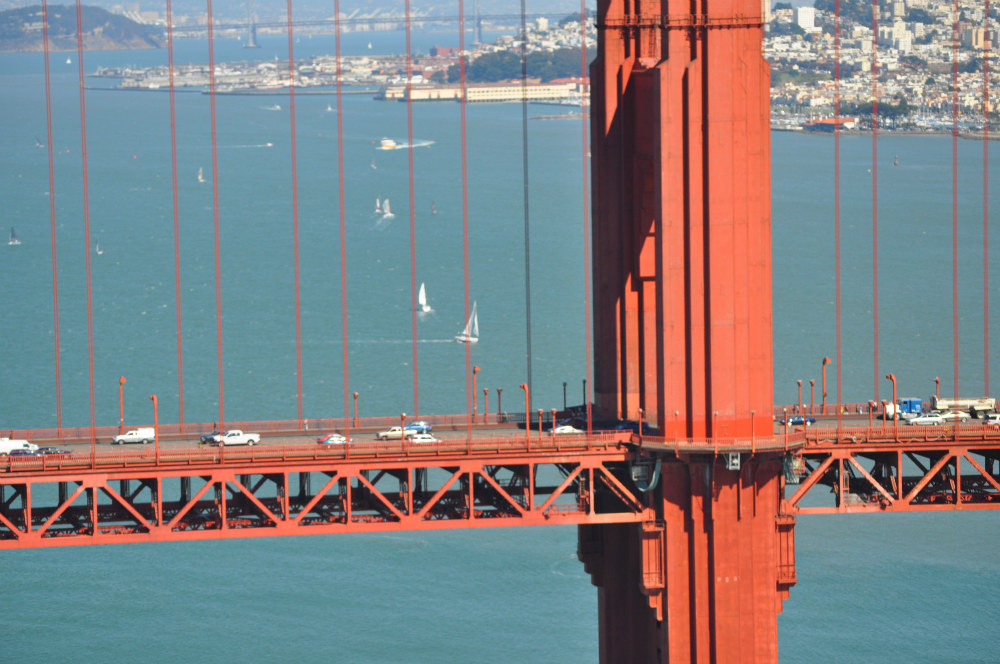 Looking down the cityfront from the Golden Gate. Photo by KL

By the time we left Alcatraz astern, the breeze was 18 knots, and I was pointing upwind to the Golden Gate and calling it the world’s greatest venturi. Bennet said—

“You mean it really does blow like this every day?” 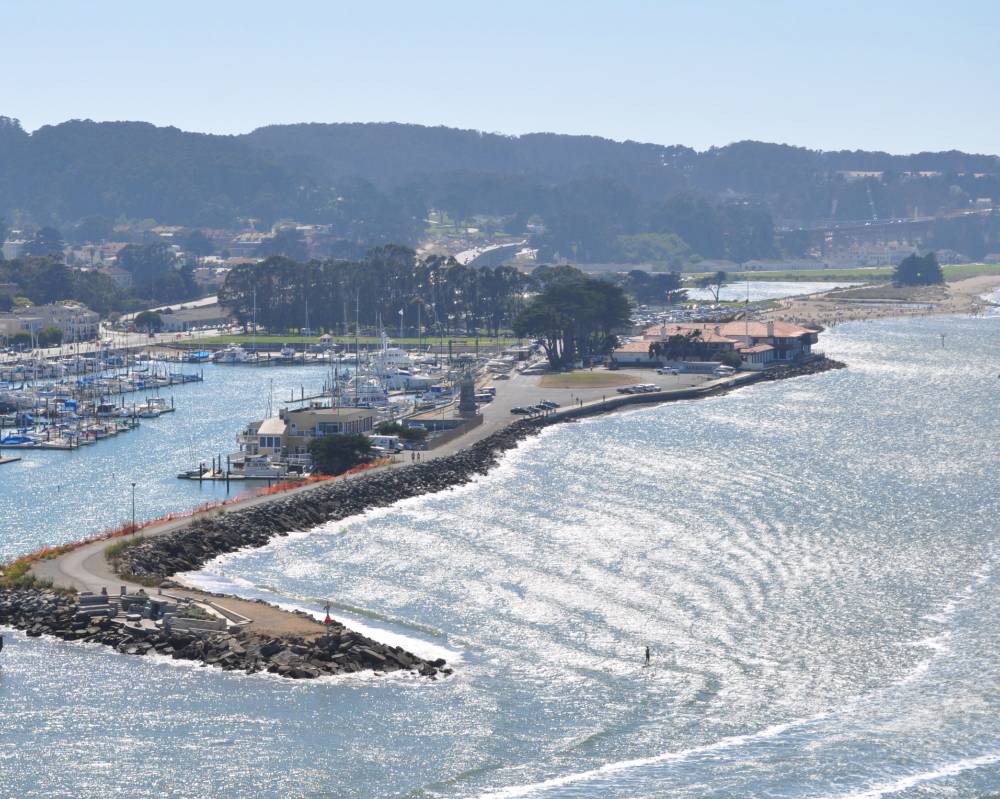 The breakwater at Golden Gate Yacht Club. Imagine the spectators at Crissy Field Beach; background, above right. Photo by KL

According the man his right to privacy, I later emailed Harold Bennett and asked permission to write about my moment of witnessing him in his enthusiasm, envisioning a San Francisco Bay racecourse bounded by “the wall” of the cityfront and likewise limited on the opposite side in order to force pairs of 72-foot catamarans into constant confrontation. His response via return email: “You are right. I did build that mental racecourse. I still see it, and it must be all hands to the pumps to make sure the event is in San Francisco.”

When it happens, you will not have to be deep into this sailing thing to get what’s going on. 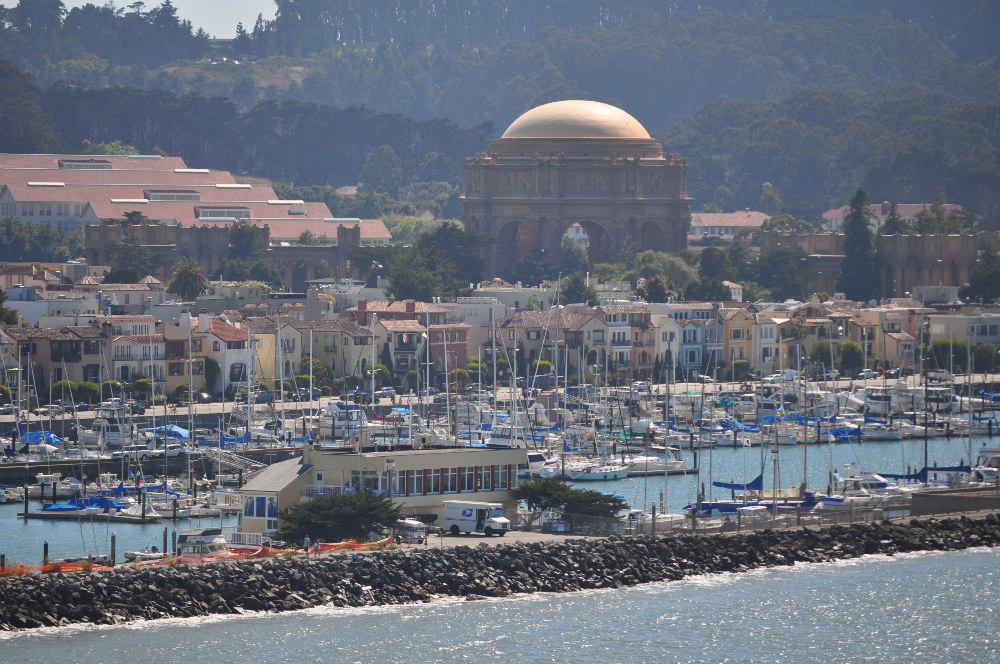 NOW IT’S TIME TO SPEAK UP

Tuesday was a big day for San Francisco’s America’s Cup Bid. The term sheet (the city’s negotiated offer to the BMW ORACLE team) was introduced to the Board of Supervisors and enjoyed strong support out of the gate – six co-authors signed on right away.

The term sheet will be referred to the Board of Supervisor’s Land Use Committee and heard next Monday, October 4 at 1 p.m. at City Hall, Room 263. It is time to show your support for bringing the 34th America’s Cup to San Francisco Bay. Join me at the hearing, and between now and then, call, email and write the members of the Board of Supervisors to share your support. Here is a link to their contact information: SF Supervisors.

The executive summary, resolution and term sheet can be read at the web site of the Mayor’s Office of Economic and Workforce Development.

To quote Gavin Newsom’s project manager on the America’s Cup case, Kyri McClellan, “We are at the helm of a tremendous opportunity. With your support, we will realize it.”