America’s Cup Returns to the Future

What does it mean to have an Italian Challenger of Record for America’s Cup 34? Let’s start with spirit, enthusiasm, gusto, sport pursued con brio. Vincenzo Onorato’s Mascalzone Latino team was one of four (yes, four) Italian entries in the 2007 Cup, and the game was more fun while the Italians were in it.

Expect more of the same. With the Club Nautico di Roma representing challengers against the Golden Gate Yacht Club, there will be pre-event racing ahead of the next America’s Cup match, and we can be sure that some of that will take place in Italy, and and some of it will take place in San Francisco, and you won’t want to miss it.

Onorato supported Larry Ellison’s legal challenge against the former Defender’s plans. The two are friendly rivals, so it all makes sense. With Ellison’s BMW Oracle Racing team winning the Cup 2-0 over Alinghi, Ellison was immediately in need of a Challenger/partner to set a framework for the future, and I like what I’m hearing.

Under the Cup’s Deed of Gift any properly-constituted yacht club is entitled to challenge. Once upon a time, the New York Yacht Club would simply wait for someone in Merry Olde England to write them a letter. In our times, however, every new Defender sets out to build a type of competition that suits his vision. Rather than sit back and wait to see what sort of challenger might pop up, Ellison was necessarily prepared with what we call a “hip pocket” challenge. That is, although he had claimed to “not be thinking about that” while the match was under way, he had already chosen his preferred Challenger of Record, and on the final race day, he had his Golden Gate Yacht Club commodore, Marcus Young, securely sequestered to prevent surprises. Receiving the paperwork from the “hip pocket” of the officers of Circolo Nautico Roma was a mere formality. Judging by this pic taken inside the Circolo Nautico di Roma, they don’t have a cell phone policy . . . 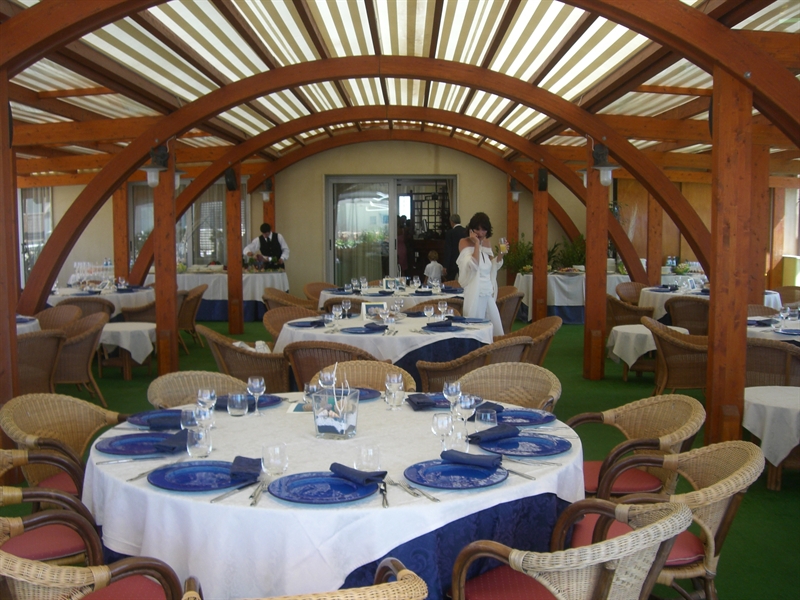 Ellison has spoken of seeking “consensus” within the sailing community as to what a future America’s Cup should be. Back to monohulls, apparently, is his preference. That leaves time and place to be determined, along with a precise choice of boat (multihulls have not been explicitly ruled out). Most likely, the next platform will be faster and more contemporary than the Version 5 ACC boats that were raced in 2007 and are still in competition for various editions of the Louis Vuitton traveling road show.

The next defense should take place in the USA. The alternative is unthinkable. That much of tradition we want back.

You might notice that personalities dominate the stage while, technically, only a yacht club can win, hold, or lose the America’s Cup. The parallel reality is that personalities do now dominate, and players such as Ellison and Onorato have learned how to partner with yacht clubs under agreements that leave them free to play the game as they see fit.

Larry Ellison was not a member of the Golden Gate Yacht Club until he needed a partnership, and then events moved quickly. It was early in the new century, and our software giant was organizing his first challenge, for the races in Auckland, when word hit the street that Ellison had not come to terms with the St. Francis Yacht Club just a few hundred yards to the west. Then-GGYC commodore Norbert Barjurin picked up the phone and–

Could there have been a happier man in Valencia last Sunday? 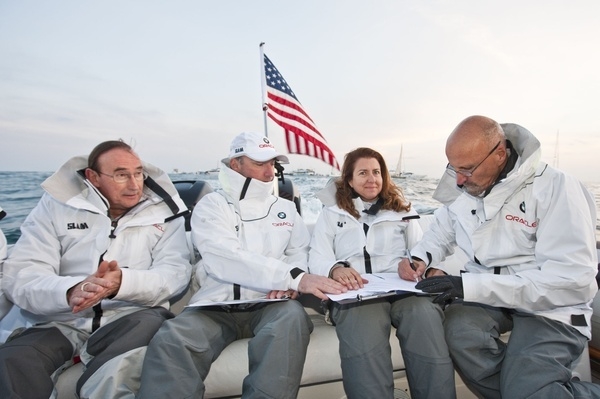 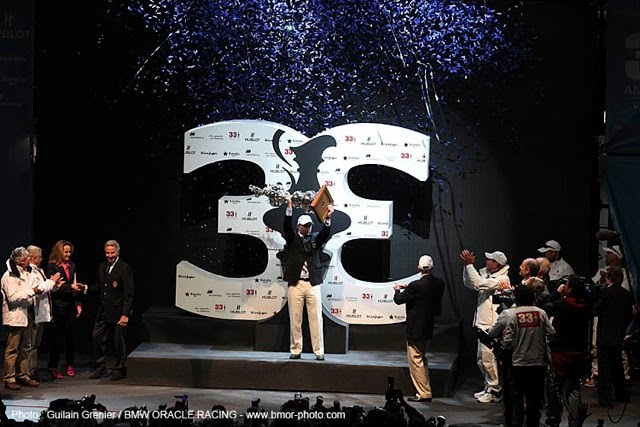 GGYC Commodore Marcus Young with NOT the Seaweed Soup Perpetual

Becoming first a Challenger of Record against Alinghi and now Defender of America’s Cup has been a great shot in the arm for this small institution on the shores of San Francisco Bay—the club’s entry in the 2009 Yachting Yearbook identifies it as “Trustee for the world famous Seaweed Soup Perpetual Trophy”—but no one at GGYC is bossing Ellison around as he plans the 34th defense. This is a huge cultural shift from New York Yacht Club’s 132 years of America’s Cup possession, and the logical result of the devolution that began during the San Diego Yacht Club’s term. Traditionalists may decry, but the freight train rolls on. 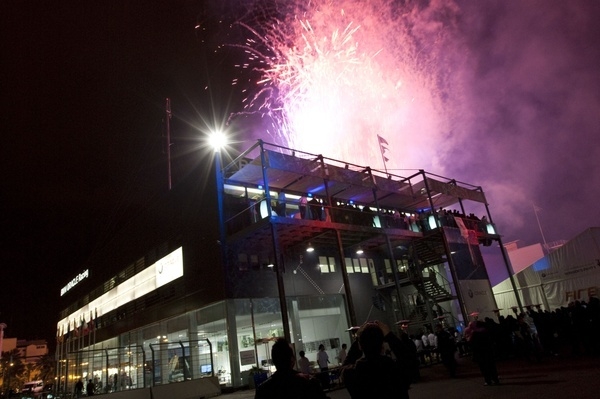 Celebration at the BOR base. Photo by Gilles Martin-Raget/BOR

Ellison has promised to attempt to hold the next America’s Cup on GGYC’s home waters, “but we need the city to be with us 100 percent.” Considering that the city of San Francisco has no money for funding infrastructure—and the Board of Supervisors has no history of being friendly to high-hat endeavors such as sailing—Ellison’s proviso could prove the key to holding the defense elsewhere. Newport, Rhode Island, for example, in historic waters. Either way, San Francisco Bay is sure to see the Cup boats in action at some point, and the cameras will love the place, and if the Cup match is also on the Bay it will be a thing of beauty.

BMW Oracle Racing CEO Russell Coutts is the mastermind of the win by the big trimaran. Coutts won the Cup for New Zealand as skipper/helmsman in 1995 and defended in 2000. He won again for Alinghi/Switzerland in 2003 and then was sidelined by his former boss, Ernesto Bertarelli. There are hard feelings there, for sure. Returning to the hunt on behalf of Ellison, Coutts remains the most-winning Cup helmsman in history and undefeated in any role at the Cup. In post-race press conferences, he has refused to commit to a defense in the USA, but I hope that’s not a sign of anything. (He’s a Kiwi, after all.) Both platform and timing are up in the air, to be negotiated, but Coutts has made the BOR position clear that an independent group will be formed to conduct the challenger trials—”independent management”” is the buzz phase—which addresses the point most at issue in Alinghi’s proffered July, 2007 protocol that set us on a path to the Deed of Gift grudge match just completed.

(We could write a book about how the previous Defender, Ernesto Bertarelli, brought himself down by overstepping the bounds, trying to create and manipulate a “lap dog” Challenger of Record that, ultimately, was ruled invalid by the courts of New York. But let’s save ourselves a few hundred thousand words and move on. Vincenzo Onorato is not a bought man.)

Meanwhile, I hear that Halsey Herreshoff will attend events when the Cup arrives in San Francisco, which tells me that in some features, at least, the Cup of the future is returning to its roots. An earlier Herreshoff constructed eight consecutive defenders between 1893 and 1934, and Halsey is a Cup veteran himself whose Herreshoff Marine Museum and America’s Cup Hall of Fame are a sailor’s must-see in Bristol, Rhode Island.

If you want a glimpse into what Ellison’s Deed of Gift challenge has rescued us from, give a read to Dana Johanssen’s story in the New Zealand Herald, about how the representatives of the defending Swiss club tried to sabotage the operations of the race committee. Read it here

For the record, here’s how they see the Challenger of Record announcement in Rome: