I love the smell of napalm in the morning. 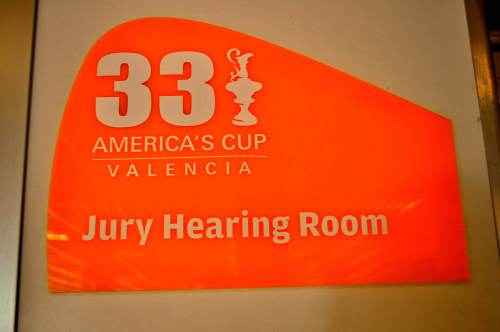 Scene of the hottest action so far

The Announced plans for Saturday include a press conference with the two major players in the same room—Ernesto Bertarelli the Defender and Larry Ellison the Challenger—which sounds like a photo opp for a wide (very wide) lens.

Long range weather prognosticators are giving us six knots for Race One on Monday and twelve plus for Race Two on Wednesday.

Russell Coutts, masterminding the BMW Oracle Racing challenge, goes around here saying things like, “Tell me the weather forecast and I’ll tell you which boat will win.”

Meaning, there is a general assumption that the catamaran, Alinghi 5, will like the light stuff, and the BOR trimaran—newly renamed USA—is a better all-rounder but will like a touch more breeze. Thinking back to 2007 and all the predictions made regarding Alinghi versus Team New Zealand, most of them off the mark (and those were highly-developed examples from a well-researched design rule), I won’t read too much into a general assumption regarding two hugely different machines.

If the Defender were not afraid of the capabilities of BMW Oracle’s trimaran, would he be so dedicated to sailing in the least wind possible? The recent decision of the International Jury, striking the wind limit (15 knots at 60 meters) from the Sailing Instructions and returning the responsibility to the Race Committee, is a leaky bucket from the Challenger’s point of view. Sounds good for the American tri, except . . .

And I wonder, would I be the only person brought up short by America’s Cup posters brandishing the phrase, Bring It On. Somehow that phrase doesn’t work for me anymore.

American tactician John Kostecki—an authentic American in an international team—says that the biggest performance increase in the development of the trimaran came with installing the wing, a difference marked in speed, maneuverability, and ease of tacking. How maneuverability will figure in the equation, no one knows until the two boats meet. It seems unlikely that the two drivers are going to go for a starting line kill. There are too many unknowns. Will there be a lot of maneuvering up the course? I doubt it. Remember those long boards in 2007?

Hmm. I see from the BAMA forum that Golden Gate Yacht Club commodore Marcus Young has invited members of the Bay Area Multihull Association to watch the race feed at GGYC. This really is a big moment for multihull enthusiasts, and anyone fascinated by technology. Too bad it’s a grudge match, but it’s the real deal. Recently I interviewed Gino Morelli, part of the BOR design team, not about the Cup boats but about multihulls now and looking forward. You can read that story at sailmagazine.com. Let’s close with some eye candy. 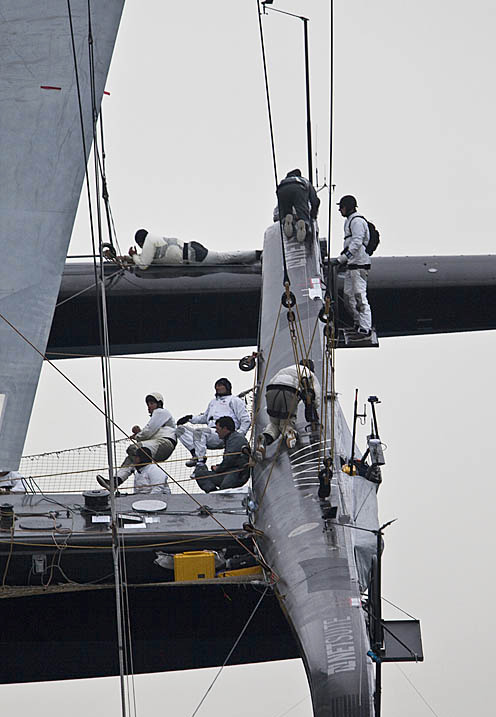