On the West Coast we have more Bigfoot sightings than team races, but that’s changing. No less than three California clubs sent delegations of nine sailors apiece to New Orleans for the Southern Soiland Cup on Lake Pontchartrain last weekend. 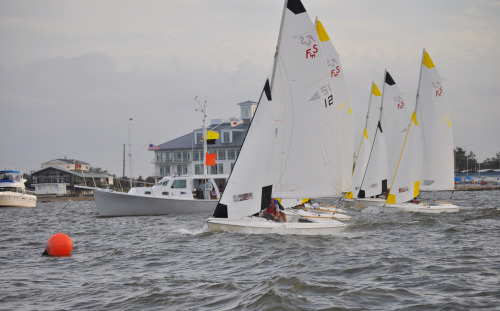 Even left of the Rockies, people have noticed that team racing drives youth recruitment, member satisfaction, and bragging rights. As trends go, it’s a trend, all right. Around New England, especially, team racing has grown to be a major thread in collegiate competition, and when yacht clubs pick up where schools leave off—which is exactly what they’re doing—they bridge the gap in which too many young sailors otherwise drift away from the sport.

Southern Yacht Club saw this years ago and undertook to build itself up as a team racing power even while rebuilding from what Hurricane Katrina did to the Gulf Coast. For most of us, their Southern Soiland Cup last weekend was a first opportunity to enjoy the new clubhouse (clubhouse number four) of this 160-year-old institution, along with a bit of extreme southern hospitality. Frankly, my dear, the cobwebs have yet to clear.

Southern YC staff commodore Corky Potts, a competitor at some team racing events and a hard-working volunteer at the Soiland, says, “We wouldn’t have this going if we didn’t have the college kids leading the way and educating the rest of us. Team racing is the wave of the future because of the excitement of 15-minute races. The sailing doesn’t kill you if you have a few years on you, and the kids love it. The whole thing is invaluable.”

Team racing is nothing new, but its penetration is new, and it requires a different mind set. Three-boat teams are the most common form, with each team aiming for a winning combination of finish positions, and it is easily possible for a team with a first finisher to lose the combination. This is a mental game.

With three-boat teams, any finishing combination of 10 points or less wins. Thus, 2,3,4 beats 1,5,6. A smart leader looking aft and seeing teammates lying 4th and 5th will go back and try to mix up the fleet to spring those boats out of cover. Races are short, rotations frequent, and there is plenty of action for race committees, who probably run 50 or more races in a regatta and must also deliver on umpire boats and umpires. It’s a commitment, but with rewards.

And how well have our friends in New Orleans done with their team racing program? Well enough to win their own event by winning every race except one, and that was lost to Newport Harbor Yacht Club, which a while back gave Southern the trophy that became the Southern Soiland, so there’s balance in that, I believe. Albert Soiland was the first commodore of Newport Harbor Yacht Club, and after Katrina wiped the Gulf Coast, NHYC was quick to offer up an idle piece of precious silver (a cup originally won by Soiland in the 1911 San Clemente Island Race). 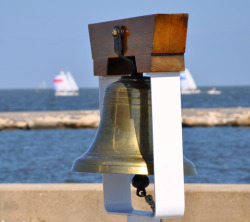 So. It was Southern first, Newport Harbor YC second, and New York YC third. Newport Harbor, which runs its Baldwin team races annually, has fed well on the strengths of former college sailors. Southern, obviously, has made a terrific comeback, and to really “get” how far they’ve come back, let’s take a look at the one bit of the old club that survived the Katrina fire and flood, the bell. Honest, this is it.

I’m willing to bet that nobody will soon forget the floating docks that were used, for a day, for sailors awaiting their turn in the rotation. It looked like this when the mob sailed up . . . 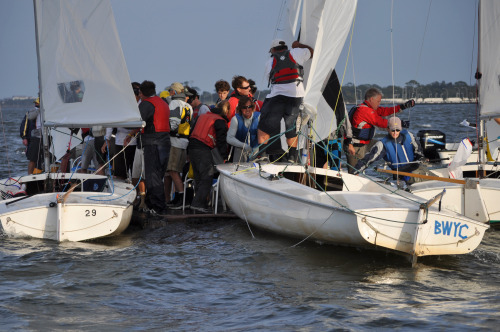 And it looked like this as things cleared out . . .

And it could get downright surreal. Gulls on a log . . . 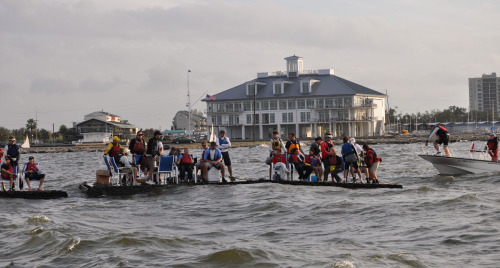 On day two, rotations were completed dockside. It was slower, but.

Call it a great weekend of racing because it was that. Rounding out the West Coast were St. Francis YC and San Diego YC. St. Francis I know for sure has team racing in its sights, long-term. But unlike Southern, situated in a region where all the Gulf Yachting Association clubs race Flying Scots, Northern Californians have to ask and answer the question, what kind of boat? Other GYA clubs, including Bay Waveland and Buccaneer, contributed by trailering-in Flying Scots for the weekend to round out the fleet. Those clubs have their own hurricane recovery stories, but that is a tale for a different day. How strange to be under Hurricane Ida watch as the awards went ’round, and long distance travelers broke for the airport, pockets loaded with if-only’s and thoughts reaching toward 2010. Laissez les bons temps rouler. 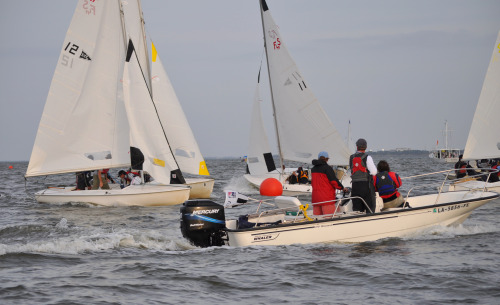 But first, Ida is no Katrina, but it’s weather a’coming, so let’s make sure the juniors tie up the little boats . . .

AND NOW TIME HAS PASSED, AND ALINGHI HAS ANNOUNCED (NOT WITHOUT A FEW SNARKY COMMENTS) THAT IT’S READY TO RACE IN VALENCIA IN FEBRUARY. AND BMOR HAS ASKED, WHAT DOES THAT MEAN?

Dig the wing on youtube: the wing goes up