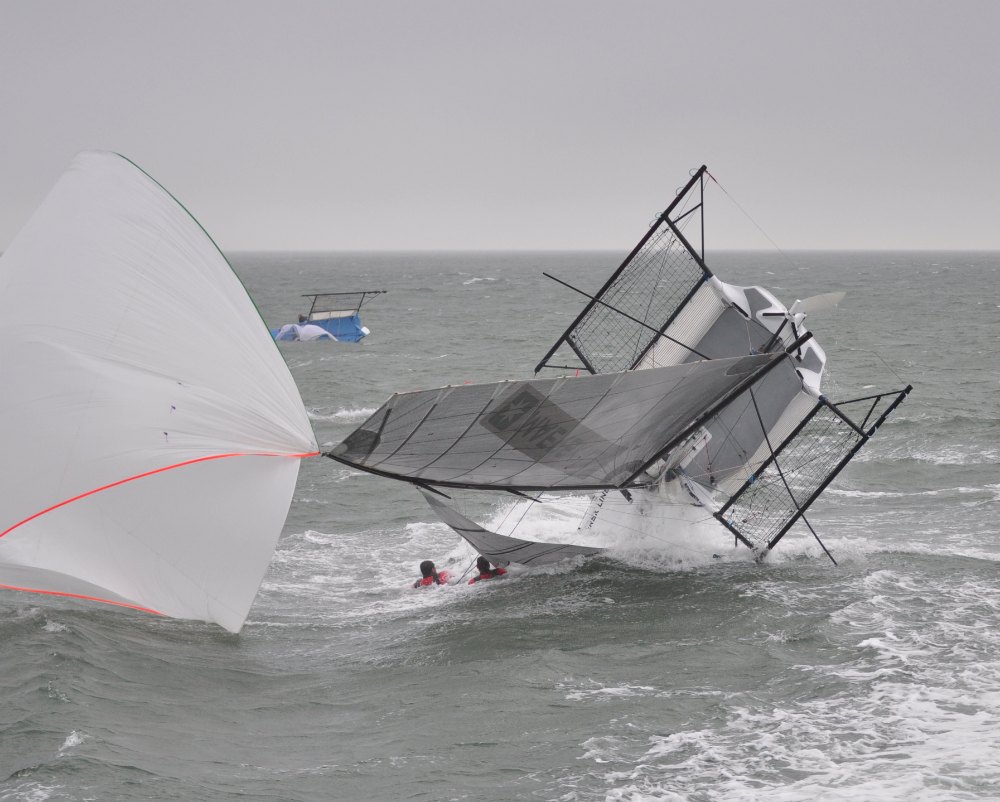 All Photos by Kimball Livingston

Today we undertake a study of the habits of man. In particular, we ask why two of the most popular sailing events in Northern California are totally whack. Or, to rephrase that, why should two totally whack sailing events rank at the top of anybody’s local calendar?

You could ask, why did Cadillacs have tailfins?

Or you could ask, why did those great tailfins go away?

Every winter, when average winds are at their wimpiest and average tides are at their screamingest, San Francisco Bay boats with lids turn out by the hundreds for the what-else-could-you-possibly-call-it-but Three Bridge Fiasco. Our biggest regatta of the year. Round three marks in any direction in any order and roll the dice on the puffs. And year after year the best sailors finish at the top. Don’t you just hate it when that happens?

On the flip side of the calendar, every August there is the Ronstan Bridge to Bridge, a jam-up of windsurfers, kiteboarders, and 18-foot skiffs. A natural mix, actually. In each of these groups, there is no one who would rather be sailing slow. And as Howie Hamlin says, “I bet, in about a third of the B2B races, whoever won, we’ve had a windsurfer, a kiter, and a skiff in the top three. The best of each. Talk about finding the limits of sailing.”

Talk about limits. With a breeze in the high twenties, Hamlin this year—he’s a 505 world champion, the first unAussie to win the 18-foot skiff championship, and until Wednesday the defending champion here—went down in the Strait, without ever making it under the Golden Gate Bridge and into the bay. Four of thirteen skiffs finished (31 percent), twelve of thirteen Formula board sailors (92 percent; btw you rock, Marion Lepert), and seventeen of twenty-nine kites (57 percent). The winners were the Aussie skiff team of Michael Coxon, Aaron Links, and Trevor Barnabas, maintaining their lead in the International Skiff Championship that wraps up today.

Kiwi skiff skipper Graham Catley suffered a severely lacerated leg in a crash in the early seconds of the race, outside the Gate, and local skiff sailor Chad Freitas came home hurting with ribs that possibly are cracked. That from a crash of his own. The front of the fleet was away and gone, but the waters behind were so littered with victims that St. Francis Yacht Club race manager John Craig blew off abandonment signals for the struggling stagglers.

At the bottom of the course, approaching the Bay Bridge, the leading skiffs, kites, and windsurfers were all in contention, but in a repeat of 2009, that’s where the wind faded and kites began to drift out of the sky. Only Chip Wasson (local legend, international class) broke the top five, placing fourth to protect the honor of the kites. Windsurfing stalwart Steve Silvester was top boardsailor at sixth. 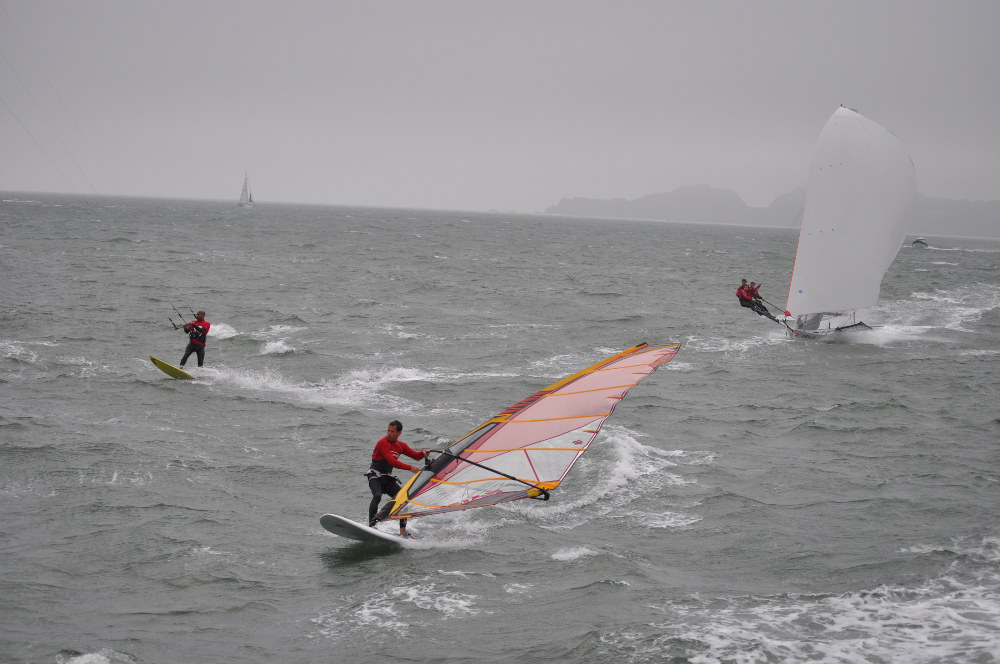 Past yon point, the next land is Hawaii, Japan if you miss that. Yes, the kiteboarder, the windsurfer, and the skiff are racing level. Oops, an unlevel horizon. They should hold that sucker still.

RONSTAN BRIDGE TO BRIDGE: Contestants rally-up in the Golden Gate Strait, just west of the bridge, and then make one big bull run for a finish line at the Oakland Bay Bridge, 7.5 miles downwind and g’bless the faint of heart because this is not for the faint of heart. A two-day heatwave broke in the afternoon and the fog rolled in and the breeze climbed into the twenties. Here is the post-start sequence as Graham Catley and crew close-up on a windsurfer that (I’m sorry) I can’t identify . . . 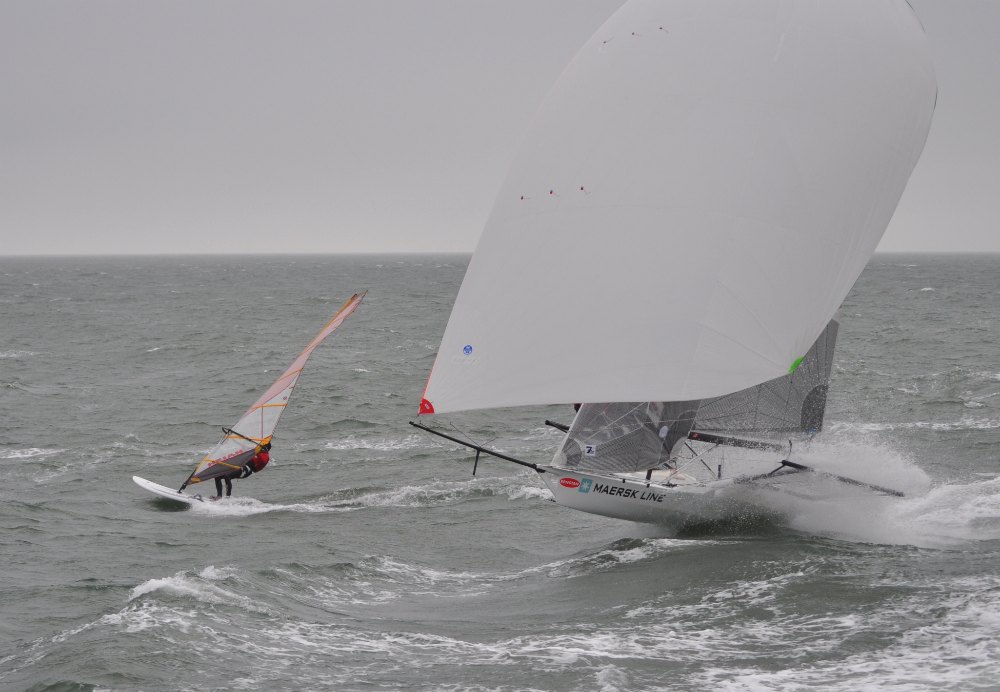 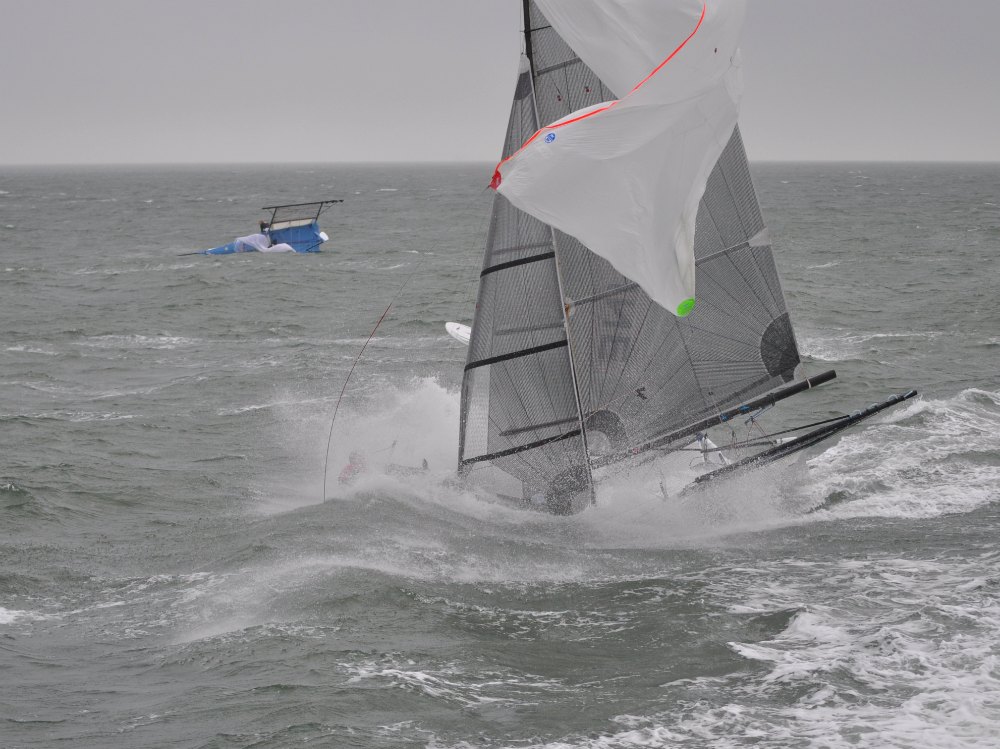 Catley and crew hail from the Auckland Sailing Club, which would seem a long way from Sydney Harbour and the origin of the 18-foot skiffs, except that here they are even farther from home, in their antipodes. Average surface-water temperature at the Golden Gate, 56 degrees . . . 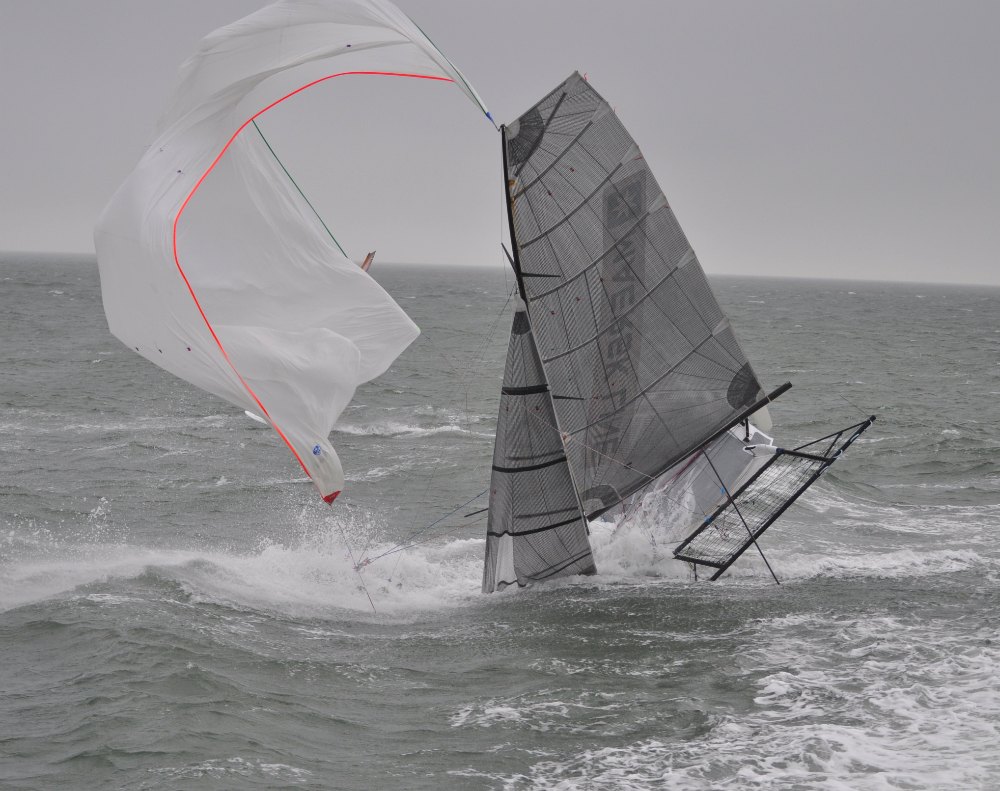 Oops, I do fear the blue-decked boat in the background is our Howie Hamlin, former defending champion . . . 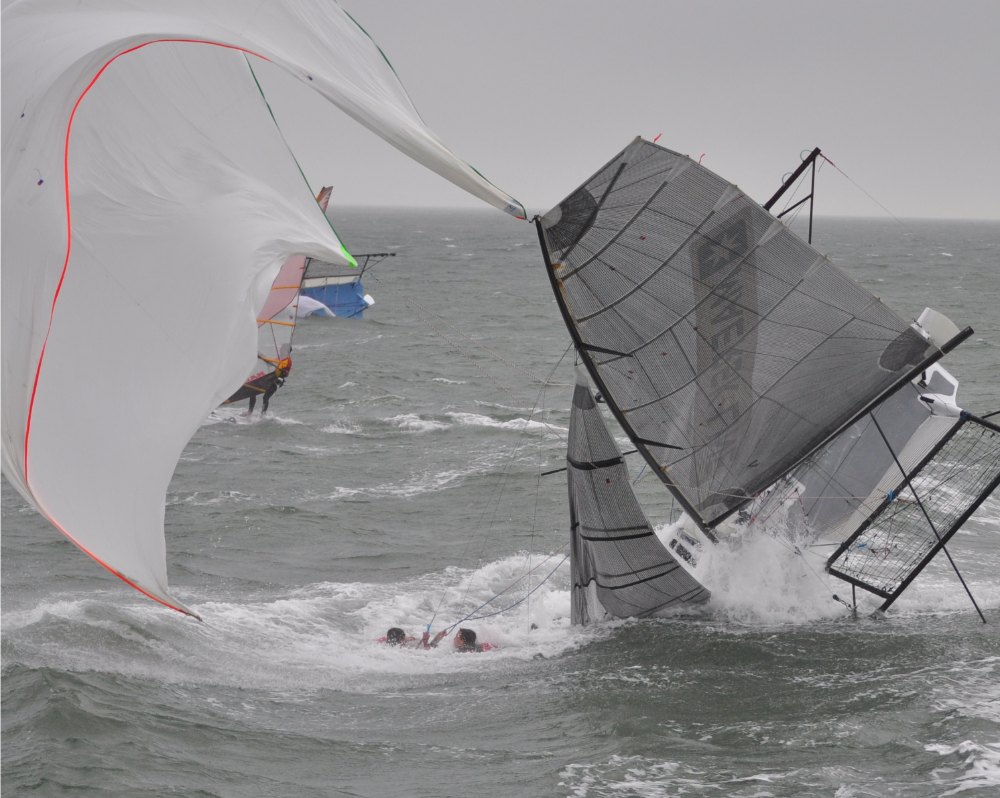 With his leg injuries, Catley will be sidelined from today’s sailing, if there is any . . . 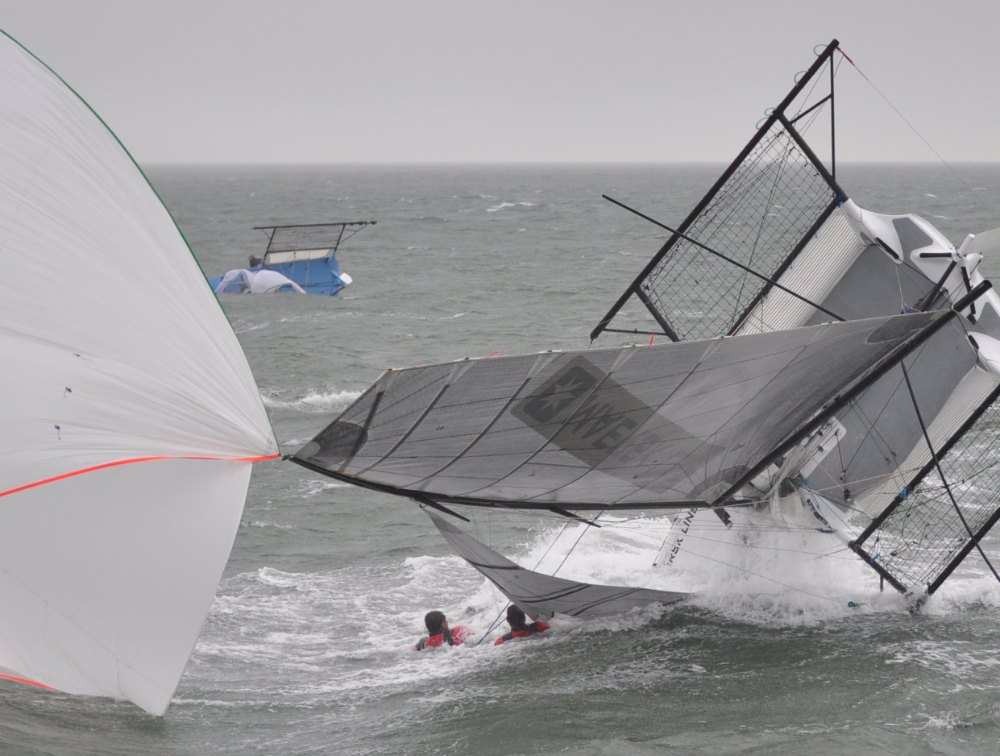 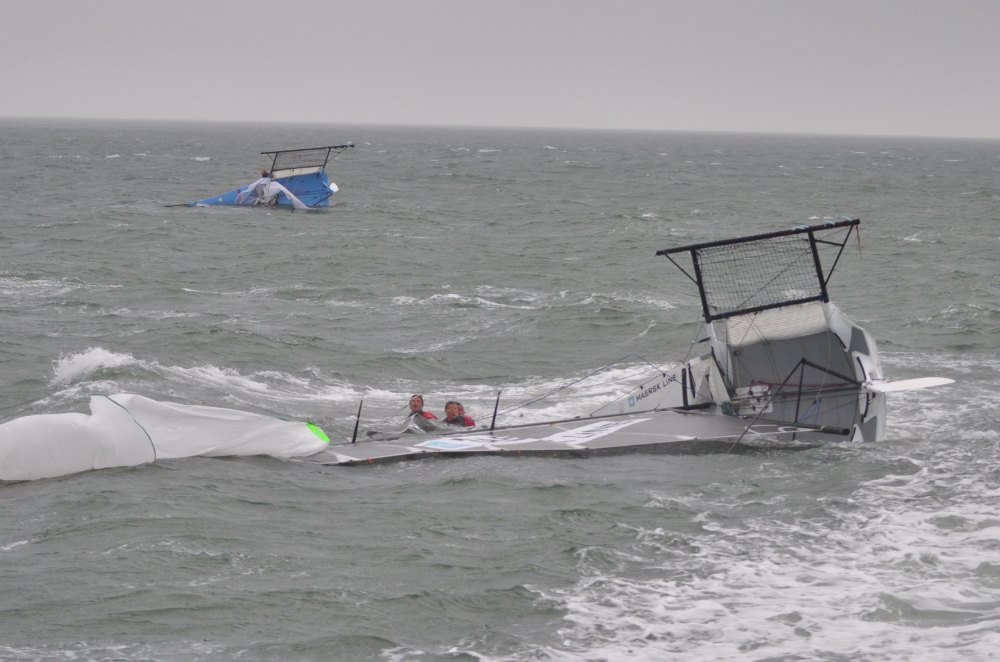 The fog has a beauty of its own, once you’ve had a break (see previous post). 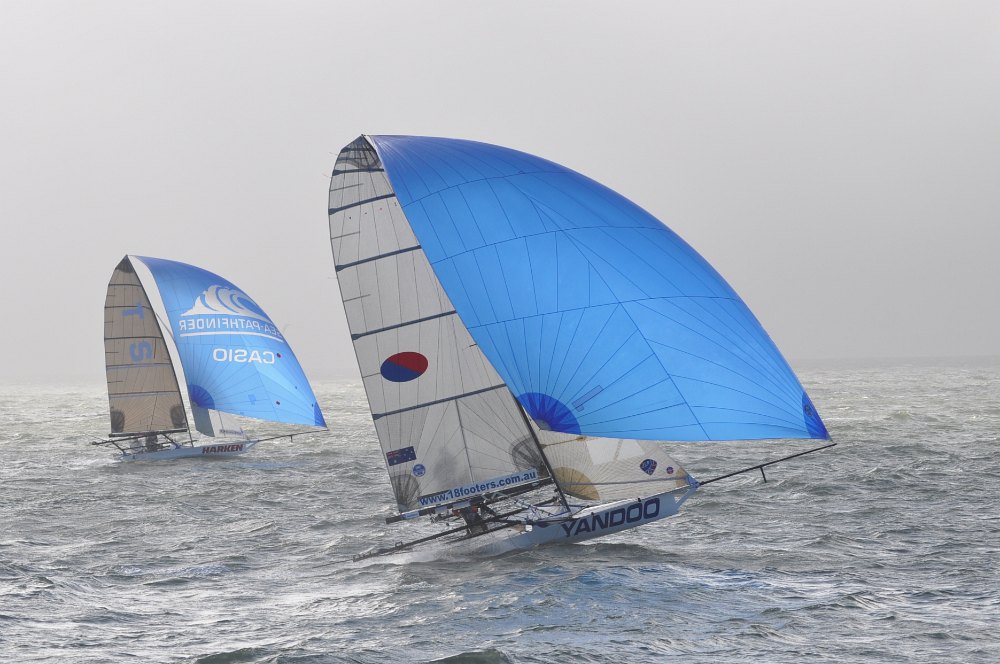 But, much as in last year’s race, the kites stepped out, then stepped into holes near the finish line. I haven’t studied the race history closely, to know if this is a problem-type problem, but it is certain that in the last two years you could have devised a fairer race course with a different finish line, That is, by booting the bridge to bridge concept. And the bath. And the baby. Oh, forget it.

Back when kites first entered this event, it was all but impossible for them to get back upwind. They still can’t match windsurfers upwind, or not very often, but the developments have been tremendous. And on Wednesday, getting downwind the last few hundred meters was the big deal. You either had a puff or you didn’t. That’s Treasure Island in the background, now transferred from the Navy to the City but not in play to host America’s Cup teams . . . 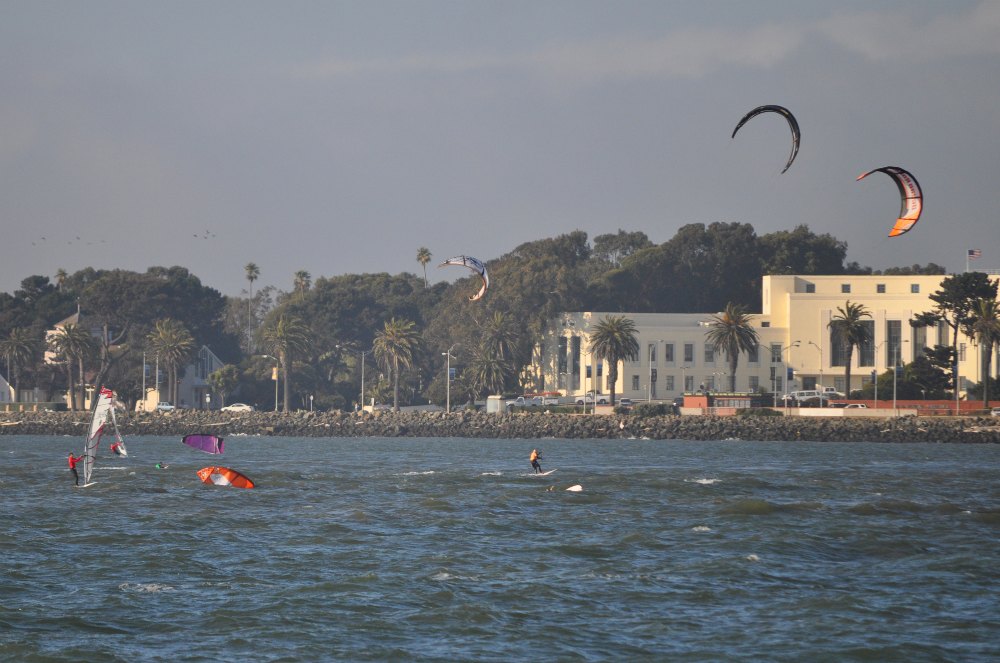 By the time you make the finish, you’ve reached a bit of sunshine, and then it’s time to turn around and beat home . . . 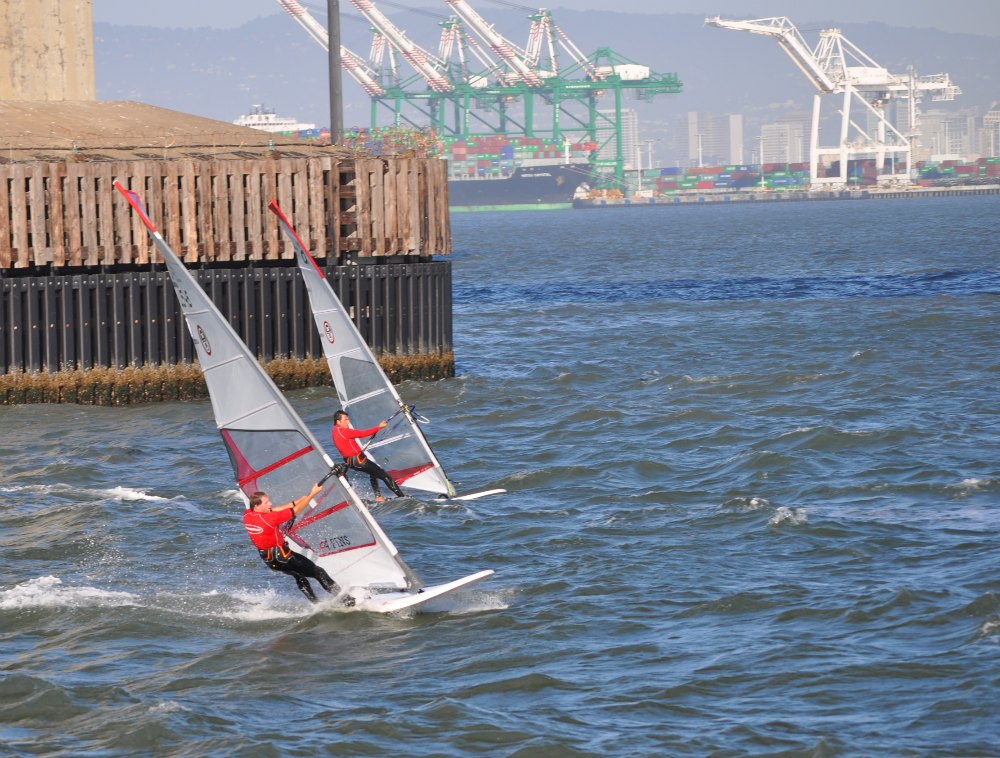 Now, I said we would pose the question, and we did: Why would two totally whack sailing events rank at the top of anybody’s local calendar?

But if you don’t understand, I can’t possibly explain.