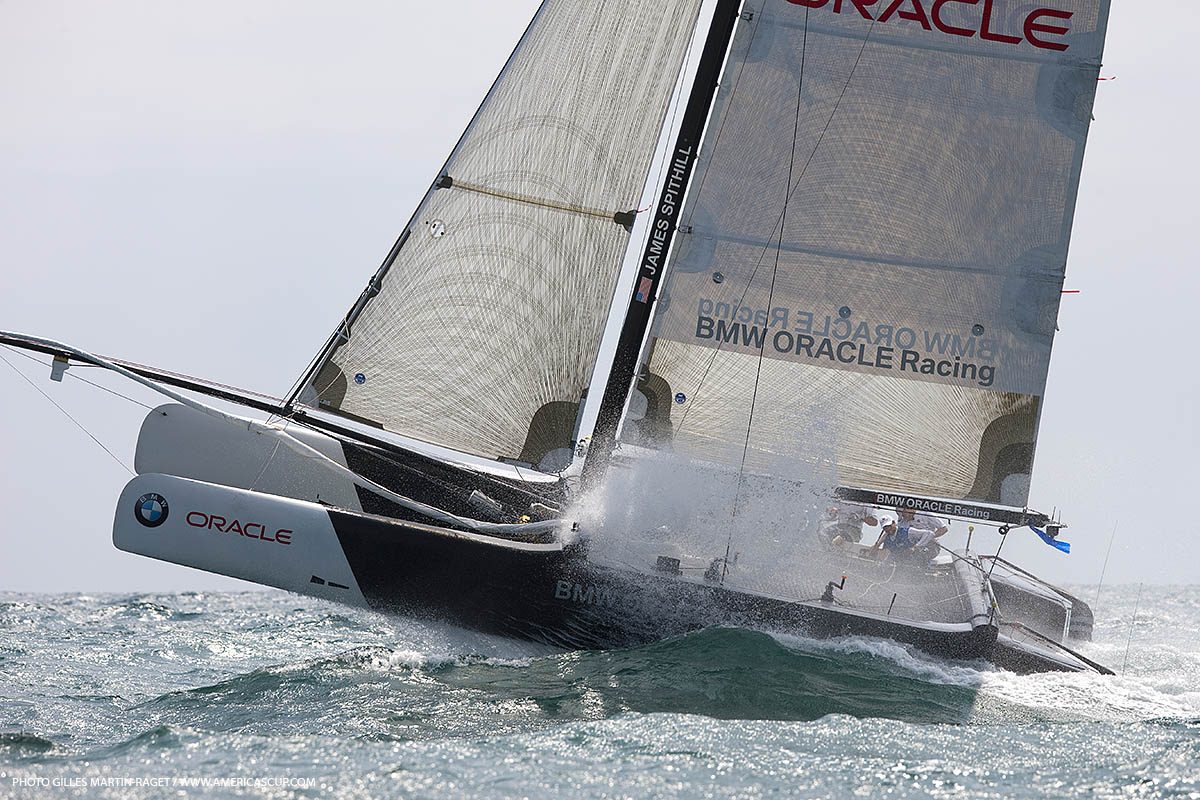 The breeze got a bit feisty in the south of Spain recently and cost the America’s Cup defenders a day on the water of comparing camera angles, etcetera between monohulls and multihulls. The intent of the exercise is to have a practical test of which platform communicates more excitement to a television audience, but two-time Olympic gold medalist Roman Hagara of Austria put it this way, “For us, the waves were fun, but for the TV guys, it was a little wet.”

Ah yes, so much handier to have the shoreside vantage points of San Francisco Bay.

As of Sunday, however, four days of the “TV Trials” have been completed in the waters off Valencia, where the BMW Oracle Racing Team is still headquartered, pending a venue announcement for America’s Cup 34. You can view rough cuts here.

The word from the team:

VALENCIA, Spain (25 July 2010) – A strong sea breeze on the final day of the America’s Cup television trials concluded what has widely been regarded as a highly successful evaluation.

Over the past four days two high-performance monohulls and multihulls have been loaded with a plethora of cameras and microphones and put through match racing maneuvers to help find new camera angles and test surround sound format.

Racecourses were also modified by changing the percentages of upwind and downwind work to see if it helped keep the yachts engaged at close quarters.

“I’d have to rate the trials an unqualified success,” said BMW ORACLE Racing CEO Russell Coutts. “We plan to do this again in the coming weeks and months, but I think we found some things that work that we’d like to explore again down the road.”

One camera angle that got people’s attention was at the top of the mast looking down on the yacht. In HD format, the picture jumped off the screen with clarity and crispness. Those angles combined with the surround sound format helped create an immersive experience.

The trials were also used to test monohulls versus multihulls and the excitement they lend to television. A new yacht design is being created for the 34th America’s Cup, and concept papers have been issued to rule writers to create a monohull and multihull design.

Paolo dos Reis, on the Course, of Course

Even getting the course wrong in the “long distance” race was not enough to distract Brazilian champion Paolo dos Reis from his domination of the Windsurfing Nationals on San Francisco Bay. Paolo was able to skip Saturday’s final race, swallow the points, and still win the title with one point to spare of Maui sailmaker Phil McGain. A separate slalom event went to another Brazilian, Wilhelm Schurmann, with McGain second here as well—on a comeback regatta, after quite an absence. Full results here.