I’ve picked up a phrase from a friend of mine, “Now go make something happen.”

To that end I stand in rapt admiration of Craig Bergh, the nurse-anesthesiologist/gonzo windsurfer from Worthington, Minnesota who continues to make something happen year after year in the form of the Midwest Speed Quest. It’s his baby, lock, stock and barrel.

Six years ago, Bergh strapped a GPS to his wrist, went windsurfing on his home lake, and was fascinated with the speed readouts. He says, “I realized that other people would want to do this.” It helped that he lived on the shores of Minnesota’s Lake Okabena, which Bergh advertises as “the fastest lake in the nation,” for cause. Being located on Buffalo Ridge, a high point separating the Missouri and Mississippi Basins, Worthington and Lake Okabena are, shall we say, exposed. And the town is embracing . . . 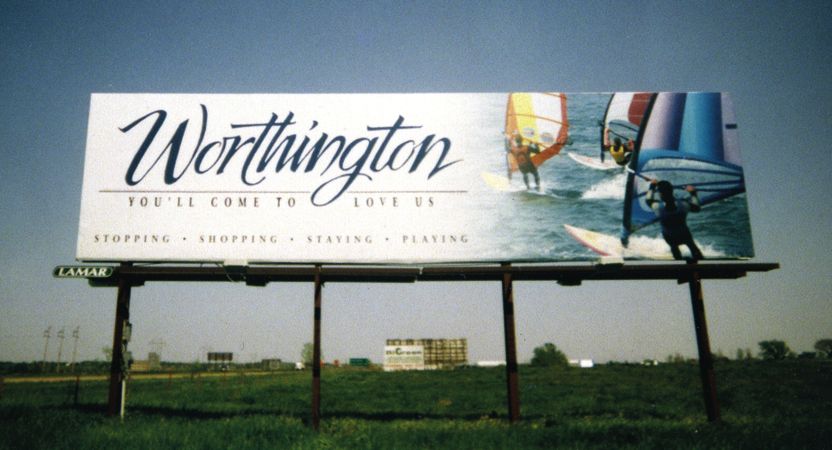 Midwest Speed Quest 2010 has just wrapped up, with Andrew Anderson of Oakland, California posting the top run of 35.4 knots . . . 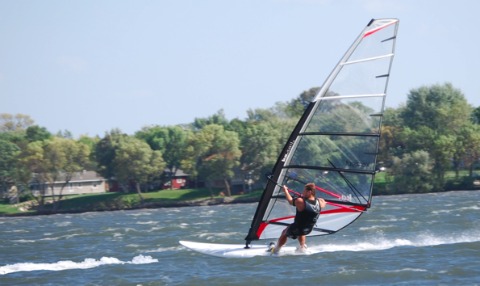 And no, it’s nothing to compare with the international scene at the Luderitz Speed Challenge in Namibia, where a new world speedsailing record was recently set—54.01 knots by Alex Caizergues—and Rob Douglas set a new American record of 52.58 knots, both pending official ratification. The Worthington deal is a lot more down-home than that.

Over a six-month season, people come to Lake Okabena, Minnesota whenever they want, and Bergh takes care of them—or someone else in the family does—providing meals and hydration and sometimes a bed in his lakeside home. “One of us will meet them with a GPS,” he says. “The GPS has a memory card that allows my computer to look at their entire day — or year — on the water, second by second, to 1/100th of a knot.” October tends to be the windiest month, and come mid-October, the Midwest Speed Quest has its winners for the year.

Why do it at all? He just thinks this is all so cool.

What does he get out of it? If you have to ask, you just don’t understand how cool. 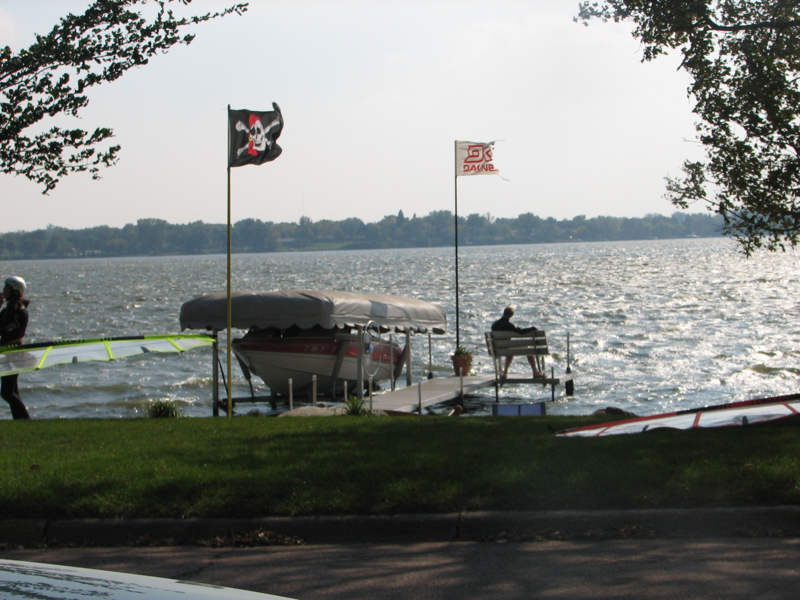 I observe that the Notice of Race has become a bit tighter than when I first wrote about this in 2007. For example, it’s now actually called (ahem) a Notice of Race. As an editor, I would lose some exclamation marks, but as an enthusiast, well, I hope I mentioned that I stand in rapt admiration—

1) This is a friendly competition designed for sailors of all skill levels. We will be there to answer questions and get you started right!

2) This Event is FREE! We even provide you with a GPS ready to go!

Free refreshments and hot meals served on the Beach.

Sailors come to Lake Okabena from all over— but so far, not so many as to wreck a good thing.

MARCHING TO ITS OWN DRUMMER is not exactly new in Worthington, Minnesota. In 1947, the town’s citizens became the first in the USA to reach out to a devastated Germany by adopting the comparably small, comparably agricultural town of Crailsheim as a Sister City. Crailsheim had been also a last outpost of the Nazi defense, bitterly defended by the SS and two-thirds destroyed in three exchanges of control.

Today Worthington’s act of reconciliation is a mostly-lost footnote in the sands of time, but reading the account in American Family magazine did not waste my time. The author notes that the gesture was launched—

“In a curious municipal document which, with a bow toward the Declaration of Independence, begins, “As, in the course of human events it becomes necessary for freedom-loving people to stamp out hate in a world of strife …

“Then Worthington sat back, a little defiantly, listening for howls of indignation from the rest of America. They heard many—at first. One was from a veteran who had lost a buddy in the capture of Crailsheim. But one of his living buddies chipped in $5 for the cause.” 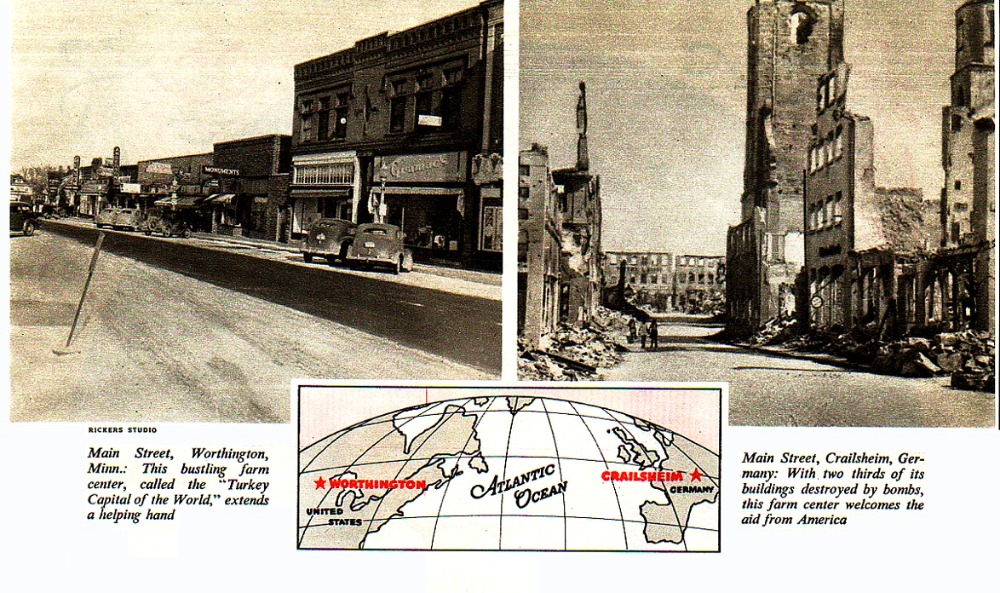 So we close out 2010 with speed figures well short of those recorded at Luderitz, but not bad for a run-what-you-brung, all-comers event where nobody’s out to get famous. (Bergh’s personal standard for the spirit of the event was set in 2006, when Americans Chris Lock and Jay Corbett, “sailed for two days and wouldn’t let each other out of sight; Chris logged 135 miles in two days.”)

Reading between the lines, I think he also has a soft spot for sixth place Magnus Zaunmueller, a 15-year-old from Beaver Dam, Wisconsin, who made 27.12 knots to top the youth category . . . 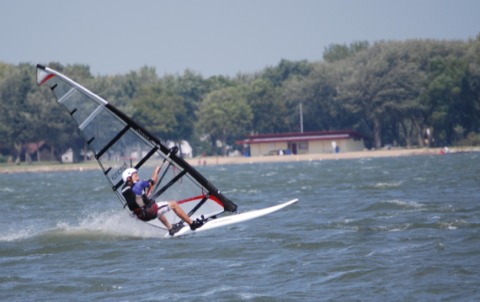 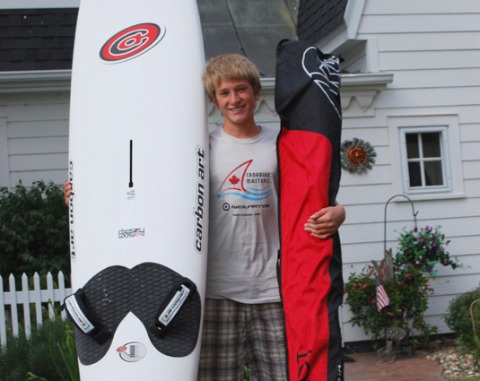 Congrats to all, but my story here is not the winners, the lake, or even the popularity of speed sailing. It’s this guy, Craig Bergh, who decided to make something happen.

So the season turns. The summer of 2010 has come and gone, and as Craig Bergh will tell you, only one thing can happen next . . . 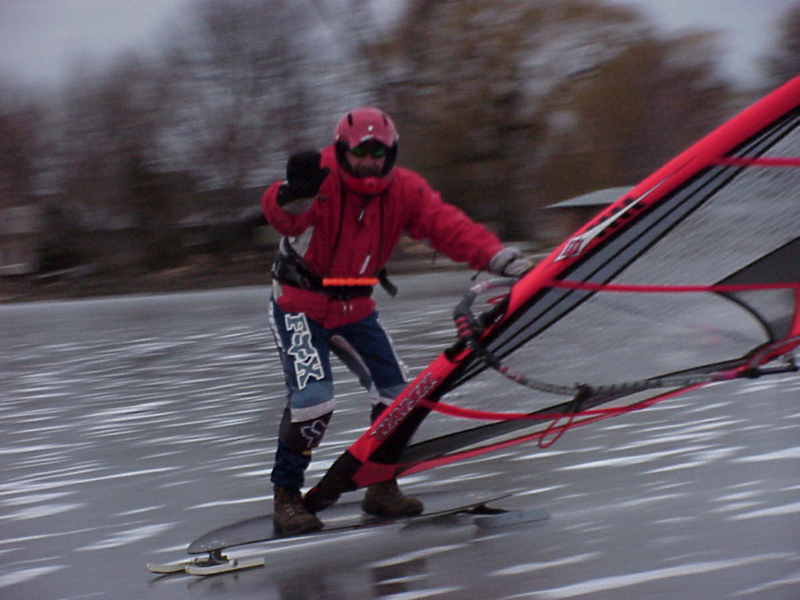