With 12 of 14 entries still racing the doublehanded Barcelona World Race and crossing their 30th day at sea on Monday, Ryan Breymaier joined a videoconference from sixth placed Neutrogena and expressed shock at all the plastic in the sea. 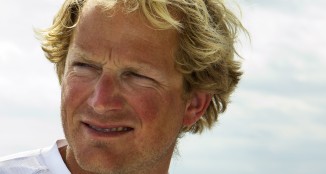 “What really sets me off,” Breymaier said, “is that everywhere we sail we pass plastic floating in the water. Where we are in the ocean just now, every day we still pass some kind of crap floating in the water and it is terrible. There is so much plastic trash, there is so much plastic fishing rope. There are so many plastic bags, plastic containers, jerry jugs, water bottles. It is absolutely everywhere. I have sailed across the Atlantic five times, and the last trip back from Costa Rica was pretty bad with the plastic, but now, crossing the Equator and down into the Southern Hemisphere, all along the periphery of the South Atlantic high it has been nothing but trash in the water.”

I sent the quote to Manuel Maqueda at BlooSee.com, knowing him to be a co-founder of the Plastic Pollution Coalition. His response adds a dimension of irony.

Congratulations to Ryan Breymaier and co-skipper Boris Herrman for getting a sponsor for a race around the world, and—

“It is powerful to sense the outrage and grief in a pro sailor like Ryan.”

“Ryan Breymaier sails aboard Neutrogena, sponsored by a company that packages almost all its products in plastic. Very few cosmetics are available in glass,” Maqueda noted, “which takes us to the ironies that we all face in our disposability culture. We need to make the connection to how we live. This is not an issue of improper disposal. It’s systemic bad design.

“We are all in this together, and I’m excited to see more and more hands on deck. Awareness is the first step towards figuring out how we can stop this disposable plastic madness.”