Imprinted on the Sea

Eighty-four years ago, aboard one of the storied schooners of the age, a father was performing chores on the topmast rigging, up where the seabirds fly. Suddenly he discovered he was not alone there, with 60 feet of air between his feet and the hard.

It was a heart-stopping moment.

Then Warwick M. Tompkins, Sr. said something like, “Well, hi there son. I didn’t know you were coming up. Look, why don’t you hold on right here. That’s right. I’m just about finished with this little job, and if you’re good, you get to ride down on my shoulders.” The father then faked finishing whatever job it was and delivered to the deck, with reasonable dispatch and feigned nonchalance, a boy forever unafraid of heights or of working aloft. It’s probably worth mentioning that the child who climbed to the topmast was two years old. 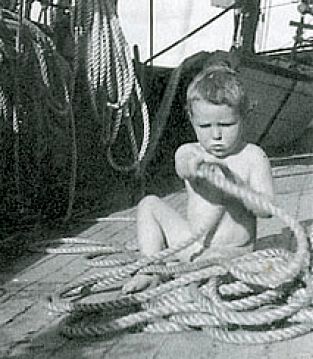 So passed one moment among many in the development of a unique, second-generation professional sailor, a veteran of six Atlantic crossings by the age of four and “already a hand, not a passenger,” as his father wrote. He was nicknamed Commodore before he was born. Commodore he would be as a growing boy on the deck of the hard-traveling schooner Wander Bird. Commodore he would be as a grown man aboard some of the world’s hottest grand-prix racers, year-in and year-out, in every sailing capital from Sydney to Cowes, Newport to Cape Town. And yes, you could figure that not just anybody could carry that name in that company.

He still pines for the schooner. Wander Bird was his first home and his first love.

But the boat that is now a traveling home for Warwick M. “Commodore” Tompkins, Jr. is something quite different. From the flaming red hull to the name, Flash Girl, in her sixteenth year the “new” boat reflects choices made according to experience, earned prejudice, a budget, and a confidence born of being born to the sea. Flash Girl looks racy, and she’s race-able, but she is at heart a 39-foot cruiser for the tropics. She was built light for a good turn of speed, with a tall rig, water ballast, and a retractable keel. Representing some 8,000 hours of Commodore’s own labor, the boat is as much a personal expression as any sonata written by a lifetime musician.

The retractable keel allows Flash Girl to nose into shallows that others avoid. Water ballast for stability “has always made sense to me,” Commodore says, “and I wanted a lot of sail area because I don’t want to use a motor. I relish powered-up sailing in smooth water, and I wanted a boat that would feel lively in less than 10 knots of wind. There’s no reason not to have that. The only reason to carry a small sail plan is because mom gets scared when dad doesn’t reef soon enough.”

No one could question the man’s right to an opinion. The frosting on Commodore’s fourth year of life was a rounding of Cape Horn, a 1936 voyage chronicled by Warwick Sr. in Fifty South to Fifty South. The book includes photographs of the boy and his sister, Ann, romping in the rigging as a native habitat while Southern Ocean graybeards break from horizon to horizon. 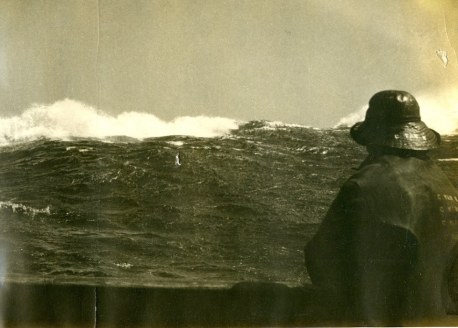 Warwick Sr. made his way by carrying cost-sharing passengers and by writing about his voyages and photographing them. He filmed much of the Cape Horn passage, driving himself to work in the worst conditions imaginable because “there is little point in fighting to save the ship here if it is only to deliver her to some callous sheriff’s deputy.” With a wry grin, Commodore notes that “whenever we show those movies today, we get criticized because we’re not wearing life jackets. We’re not even wearing harnesses!”

Wander Bird’s Cape Horn log speaks of “the fifing of every hold the wind can discover … wind that is more than just wind; it is a solid, palpable bludgeon.” The father also recorded how, in the trying periods spent hove-to, motion-weary adults sought their bunks while the children rigged themselves a swing out of mainsail reef points and then invented a cross-deck toboggan ride to add to the stimulation.

That memorable voyage began in Gloucester, Massachusetts and ended in San Francisco Bay. Warwick Sr. reckoned the Cape Horn portion as extending from 50 degrees south latitude in the Atlantic to 50 degrees south latitude in the Pacific, 1,000 charted miles that claimed 28 days and 2,213 hard-won sailing miles of the crew of Wander Bird. It would be the toughest passage of an ambition born in Paris in the giddy 1920s.

Warwick Sr. and his wife, Gwen, were seasoned sailors. He had worked commercially, and he had navigated the staysail schooner Nina to win the Transatlantic Race of 1928. Then, in Paris, the couple met a young friend who worked as a tour guide and bragged what a wonderful life he lived, staying one guidebook chapter ahead of the tourists. From that spark was born the scheme to buy a stout ship, voyage boldly, and somehow make it pay.

Warwick Sr. didn’t choose Wander Bird; he recognized it. Built in 1879 as a pilot boat for the unforgiving waters of the North Sea, Wander Bird would serve the family as home and industry from 1929 to 1946, introducing adventure and responsibility to the lives of young, paying, working passengers whose lives were forever changed. Commodore in his maturity would joke that Wander Bird was “run as a summer camp,” but the experience ran deeper. Aboard the schooner in 1931 a young man met a young woman, and they would be inspired to marry, buy their own stout vessel, and live a life modeled on the ways of Wander Bird. They would become the most famous of the boat’s alumni. The world would know them as Irving and Electra Johnson of the Yankee, a brigantine also launched as a North Sea pilot boat and sailed by the Johnsons through seven well-chronicled circumnavigations that left an imprint on much of the English-speaking, sailing world.

Interesting word, imprint. The research psychologist Konrad Lorenz adopted it to define the “imprinting” on a baby duck of the image of the first living creature it sees, which is what the duck will follow. Commodore, though he “tried to not be a professional sailor—when I started out it was no way to make a living,” of course made a living at it anyway. Lorenz, a family friend, once proclaimed, “Commodore had no choice. He was imprinted.”

To this day, however, Commodore is struck with wonderment as he recalls his coming of age and discovering the differences as well as the likenesses between father and son. “When I asked my father about the tacking angles of Wander Bird,” Commodore recalls, “I was shocked that he didn’t know.” All these years later, he still shakes his head as he tells it. Commodore, by contrast, knows the tacking angles of every boat he’s ever sailed, and if that’s an exaggeration, it’s an exaggeration that speaks a truth. His high standards for mechanical engineering and human performance as practiced under sail are recognized by all who sail with him, along with what we might call his imperfect patience for those with lesser standards.

Commodore was six years old when he dropped all of Wander Bird’s bronze ash trays overboard, one by one. “They were made in the shape of dories,” he says, “and I knew that dories were supposed to float. When the first one sank, I assumed it was because I didn’t drop it properly. When the second one sank I realized I really had a problem, but I was determined to keep at it till I got it right.”

As of 2017 it’s been seventeen years since Commodore launched his cruiser Flash Girl along the eastern reach of San Francisco Bay and took off for the South Pacific. Guests at the christening got more than they bargained for. After the predictable small delays, Commodore appeared on the deck of the boat, appealed for quiet, and announced, “I know you’re anxious to see us splash this thing, and so am I. But first, Nancy Potter and I are going to get married.” And they did.

They’ve since had some sweet years of South Pacific cruising.

Commodore says, “The schooner taught me to love point-to-point sailing, warm climates, smooth water, and voyages that require no heroics. You could just as easily say it was my father who taught me that. He was my springboard. I’ve made myself into a better sailor than my father, but I admit he was a better dancer.”