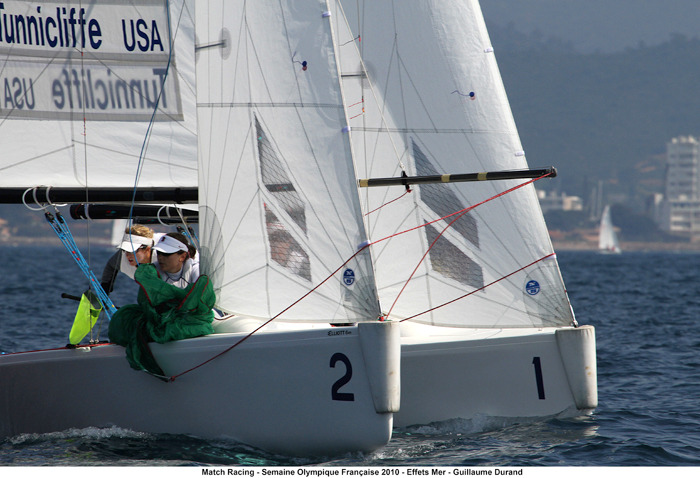 I figure Genny Tulloch had it right when she said, “Match racing is looking great as an Olympic sport, because generally we can race more often than the other fleets—whether it’s too windy or too light for others, we’re still typically racing.”

It was true on the French Mediterranean at the just-wrapped Semaine Olympique Française, or true enough to be said. But the final round of match racing had its own problems with light air (Tulloch, whose crew was plagued by a plague, did not make the final four).

Three of the women who made the final cut got there with unbeaten scores in their semifinals: Claire Leroy of France, American Laser gold medalist Anna Tunicliffe, and Silke Hahlbrock of Germany. Kathy Spithill of Australia qualified at 3-2. And then, giving the floor to Marni Lane’s release from US Sailing—

US Sailing Team AlphaGraphics’ (USSTAG) Anna Tunnicliffe (Plantation, Fla.), Molly Vandemoer (Redwood City, Calif.) and Debbie Capozzi (Bayport, N.Y.) won a silver medal in the Women’s Match Racing event at the 42nd French Sailing Week today, after finishing 1-3 in the final series against Germany’s Silke Hohlbrock. This was their second podium finish in the 2009-2010 International Sailing Federation (ISAF) Sailing World Cup series, after winning gold at US SAILING’s 2010 Rolex Miami OCR in January. Tunnicliffe’s team sailed strong and smart rounds throughout the week, but piecing together the puffs proved difficult in today’s first-to-three final series, and they found themselves on the wrong sides of the shifts more often than not.

“It was a tough day. When it’s that shifty and you don’t get your choice of the shifts, it’s hard to gain back what you’ve already lost,” said Tunnicliffe, the 2008 Olympic Gold Medalist in the Laser Radial and the 2009 ISAF Rolex World Sailor of the Year. “Hohlbrock sailed a really good series, and they definitely deserved to win.”

Complete results are listed at SOF.