We all know the top sailors carve things a bit finer, push things a bit harder. In that league, it’s taken for granted that you leave no half-inch uncontested. If you’re not born to compete, you’re not there. 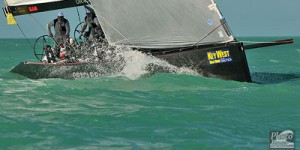 I got a kick out of talking to Ross Halcrow (Roscoe to the sailing world) about trimming headsails on an RC44 for Larry Ellison’s Oracle Racing Team. RC44s made their US debut in Miami in December, then a smaller contingent showed up for Key West Race Week. Next the show moves to San Diego in March for the first West Coast class event. As for what the man said about his job on the boat, the key is how integrated are the actions of helmsman, jib trimmer, and main trimmer (who on the 44 also has a keel-mounted trim tab to play with).

The premise of the RC44 is to provide a grand prix racing experience in a cost-controlled environment, with a bit of concierge service for enhancement.
Halcrow has won a Volvo Ocean Race and the America’s Cup. The additional premise is that, without people like him, you will be outclassed in this class.

Leighton O’Connor shot this video aboard Oracle at KWRW—

Any decent club racer is used to continually adjusting genoa trim on the upwind legs. Aboard Oracle, the genoa lead is almost as active.

“The tactician is calling the mode and the helmsman is reacting to that. I’m just trying to keep the boat balanced. Headstay tension gets changed to fit the wind strength, and then I’m using the sheet and the lead to affect depth and twist. You have to see the puffs coming and react quickly.”

Changing the lead position allows the clew of the genoa to move up or down. Going up, the changing clew position opens the head of the sail, increasing twist and depowering to maintain balance and speed. Then, of course, the lead comes back down to re-power as the puff passes.

Russell Coutts, who imagineered and co-designed the RC44, is the tactician on Oracle, and he prefers to keep his jib trimmer on the rail and let a relatively light crewmember hop inboard to grind the grinder. Halcrow again: “I’ve got the grinder ahead of me hiking up the lead, or bringing it down, and we’re constantly playing the lead along with the sheet.”

Meanwhile, Dirk “Cheese” de Ridder is on the main with the task, as Halcrow describes it, “to keep the main on the boat. What I mean is to not let it go backwinded. It’s OK to let the forward part of the main go, but you’ve got to keep tension on the leech, that last foot of sail, and as long as you’ve got that you still have a bite. Lose it, and you start to slip sideways.

“We use the telltales,” Halcrow said, “but frankly, a lot of it is just feel.”

I think I’ve heard that somewhere before.