Normal to Not Be Normal 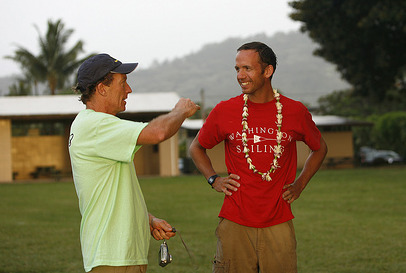 No matter where you go in the world it’s “never like this” when they switch the weather on.

So it goes with distance events as well. The 2010 edition of the Singlehanded Transpac has been slow going much of the time, with difficult seas and opposing sets kicked up by distant storms. A thirteen-day crossing is certainly not the best-possible time for a 54-foot trimaran, but that was the reality for Jeff Lebesch’s Hecla, first to finish over the July 4 weekend.

Hecla had no direct competition over the course, officially measured at 2,120 miles from San Francisco to Hanalei Bay, Kauai. The next two finishers were 30-foot monohulls—Adrian Johnson’s Olson 30 and Ronnie Simpson’s borrowed Jutson 30—and the remainders of the 14-boat fleet will be filtering in as the week goes by.

There is incentive to hurry. The awards dinner is Friday, and Hanalei Bay looks like this . . . 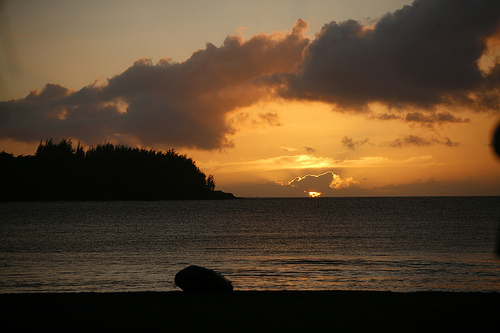 This race has nothing in common with the big budgets or big sponsorships of Atlantic singlehanding. This is grass roots, run-what-you-brung sailing, a rite of passage for those with the calling or, for a few, just another bad habit. For example, The General, meaning Ken Roper, US Army (ret.) who is on his 11th Singlehanded Transpac (as ever, announced as his last). 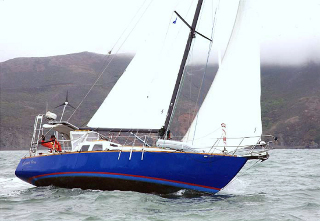 A.J. Goldman is racing a no-frills Cascade 36, Second Verse, in his first crossing, and every day is a discovery. He writes: “Today I changed strategy. I decided to stop running dead downwind and instead run about 25 degrees up. Because I can’t get my VMG above 5 knots no matter what I do. If I run dead downwind, I go 5 knots. If I heat up, I go 6.7 knots over the ground, which makes my VMG—5 knots!

“Fine. The motion of the boat is way better if I’m not sailing DDW. Doing 30-degree rolls all day (not an exaggeration) is just short of torture. And the possibility of an accidental gybe goes down. I’ve already had two of those, one pretty bad. Dave on Saraband broke his boom last night from an accidental gybe.”

Fourth to finish, late Monday, was Max Crittenden on Solar Wind. As he describes his ride, “Solar Wind is my second boat, a Martin 32 built in 1980 in the Vancouver, BC area. It’s a great sailing boat that affords ‘many opportunities’ for creative maintenance and detail design enhancements.”

The thing about the Singlehanded Transpac is that, sure, any and every ocean race represents somebody’s dream but this one is a deeper reach, a bigger ask, a more compelling statement than most any other. That is, how many of us have ever told a boss, a spouse, the people you’ve known since high school, I’m going to race my boat across an ocean all by my sweet self. 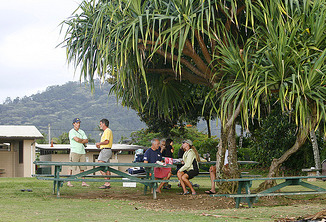 Which is probably why the Singlehanded Transpac also brings out the best in people surrounding the participants. The tradition, as photographed by Kathe Hashimoto, is that all gather “under the tree.”

He doesn’t know it, but George (“the 2010 Single-Handed Transpac is my Mount Everest”) Lythcott will not be greeted by the one or two family members he has been led to expect. No, the welcoming party is going to look like this, but a lot more jumpy and feelie in the moment. They just haven’t told him . . . 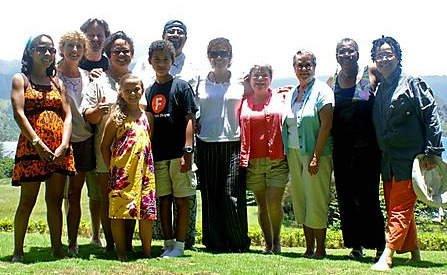 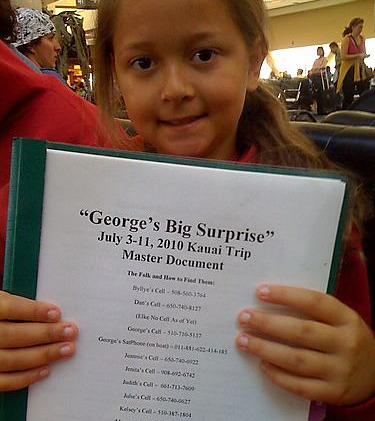 Lythcott is sailing an Express 27, Taz!!. On Day 17, he wrote, “I was hand-steering last night about 3 am. The sky was mesmerizing. The moon was behind some clouds, but through the open spaces I could see thousands and thousands of stars and the haze of the Milky Way against the black background. I was lost in the thought of being out in the middle of the Pacific alone, and as I looked straight up I saw an area where there were no stars. Hey. Then I realized I was looking at a black cloud. I looked for the edges, and it was massive, tracking behind me. Probably the size of Manhattan. I went below quickly and suited up. Foul weather pants and jacket, life jacket, harness and hat. I tethered myself as I stepped into the cockpit and all hell broke loose. The wind went from 14 knots to easily 25, and changed directions by 180 degrees. It started to rain heavily. The sails started banging around and the auto-pilot, now confused, shut down. I took the helm and started sorting things out. First, the #1, which was back-winded and poled out on the port side. Luckily, instead of breaking, the pole de-telescoped. I pegged the tiller, went forward, and took the pole down. The sail was now just flapping loudly. Next, deal with the main. Back at the helm, I eased the preventer. I was now steering Taz!! upwind toward Hanalei Bay.

“In the rush, I hadn’t closed the hatch and the inside of the boat got wet again. The only time the dampness still bothers me is early in the morning when it gets cold. I have nothing to cover me. Last night I used the spinnaker, the one I saved from the headstay yesterday. I hand-steered Taz!! another one and a half hours, until the wind returned to 62 degrees magnetic and dropped to 15 knots. Then I reset the sails and let the auto-pilot steer. I sat for a while watching the sky and looking for more squalls. They were there but off my port side and not a worry.

“Today, I’ve been thinking about how wonderful this experience continues to be. I am trying to memorize it. There may be other attempts, but there will never be another first time.”