Right in the middle of Regata Copa México comes a day of Puddle Jump seminars, a get-acquainted and get-educated opportunity for cruisers outbound into the Pacific. Most of their day was spent in the lounge at Marina Riviera Nayarit, in La Cruz de Huanacaxtle . . . 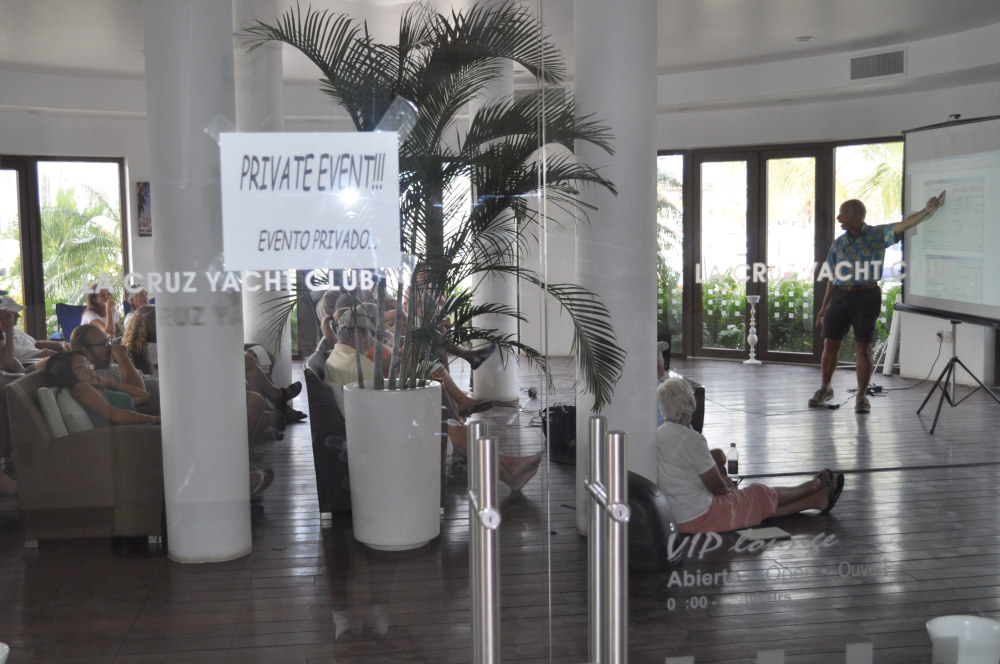 A day later, with the same Private Event sign still in place, the same room was locked down by Federales anticipating the return from the regatta racecourse of President Felipe Calderón. His departure got the attention of the press, la prensa . . . 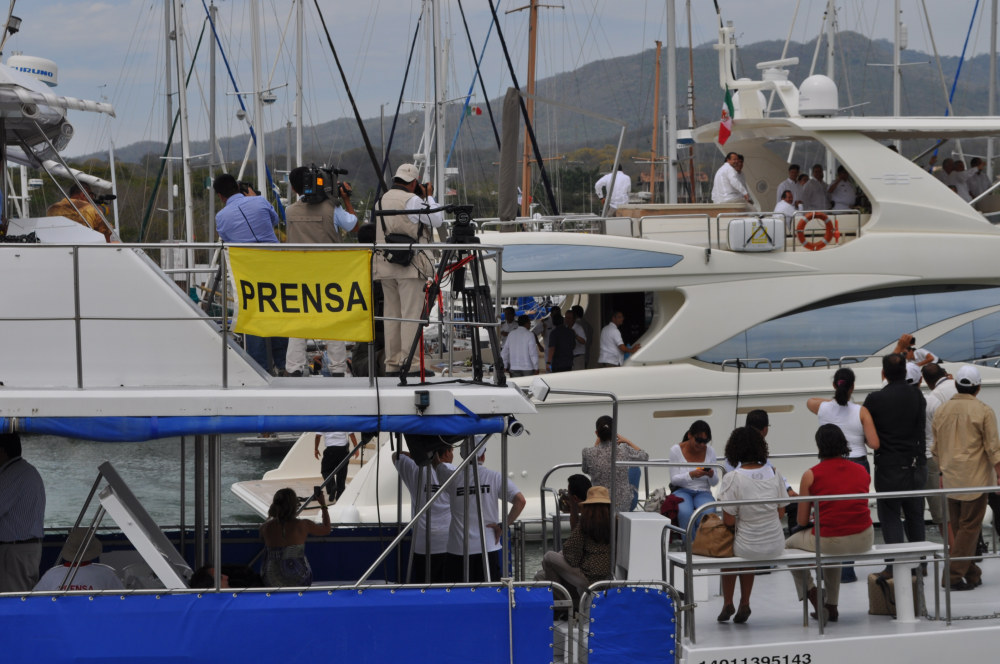 I’m thinking the last time a U.S. president visited a boat race would have been Kennedy at the America’s Cup.

The governors of Jalisco and Nayarit joined the president and announced a plan to streamline local life by moving the time zone that now divides what has become a metropolis, also by unifying the taxi system so that a driver can cross the state border (as they often must) and pick up where he drops off. These things matter, but not for much longer to those headed west.

Susan of Mulan, a Grand Soleil 39, modeled the Puddle Jump shirt, which has the names of all registered Puddle Jumpers . . . 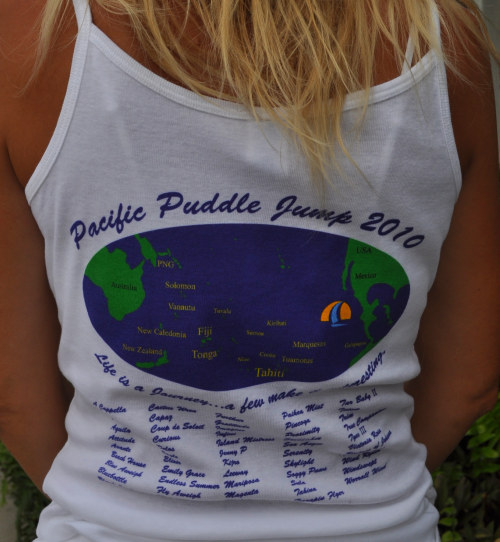 Meanwhile, the Puddle Jump energy was amped up high . . . 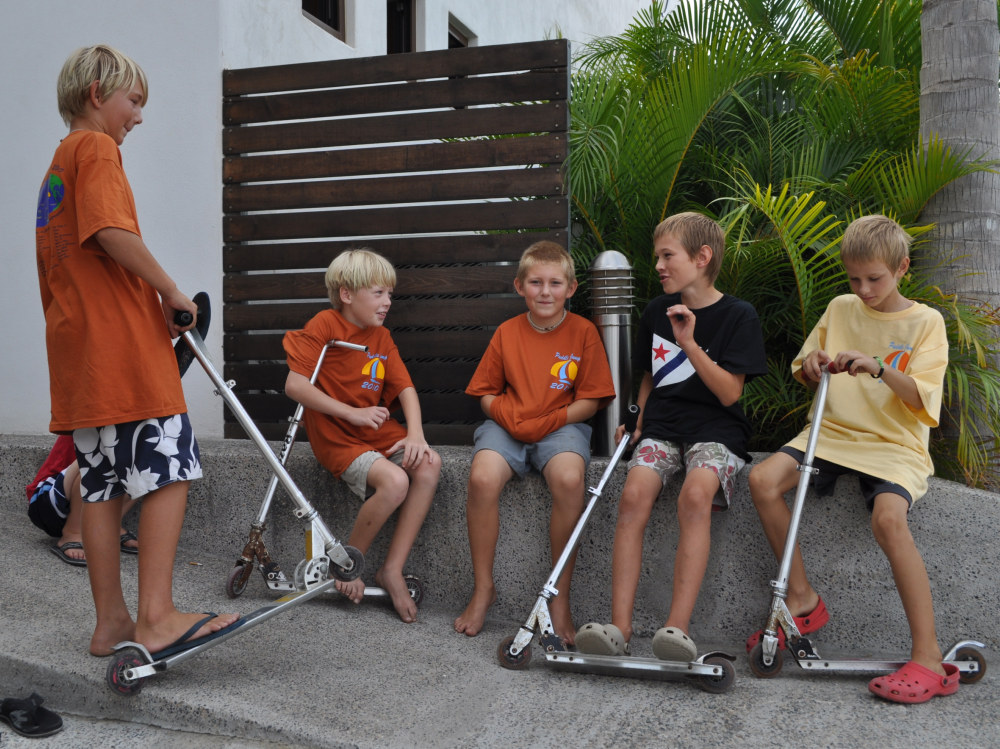 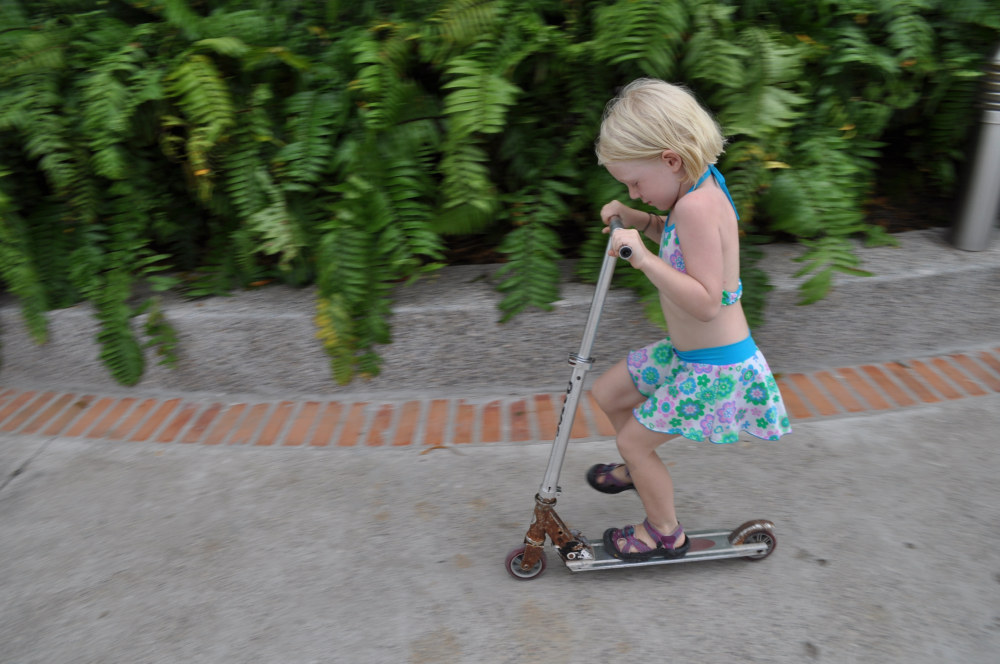 Siobhan at speed. She belongs to the Totem clan. Photo by KL

And of course, you don’t have to register for a Puddle Jump t-shirt to sail across the Pacific, but how many did? According to our official t-shirt designer, Ken Newell of SV-Trim, the number would be fifty-eight.

Trim is out of Southern California for their longest sail past Catalina. Newell says, “I’ve been working all my life to get the pennies together to do this.” Are you going all the way around? “That’s the plan.”

This just in: World champion freestyler Adam Koch won the kite racing conducted at Bucerias in a “no matter where you go in the world, it’s never like this” finale. That is, only nine of twelve scheduled races sailed. Next, we’ll wrap up the MEXORC component of Regata Copa México—the final race happens today—and then comes racing for fifty-plus J/24s. The J/24s kick off with practice racing on Monday.