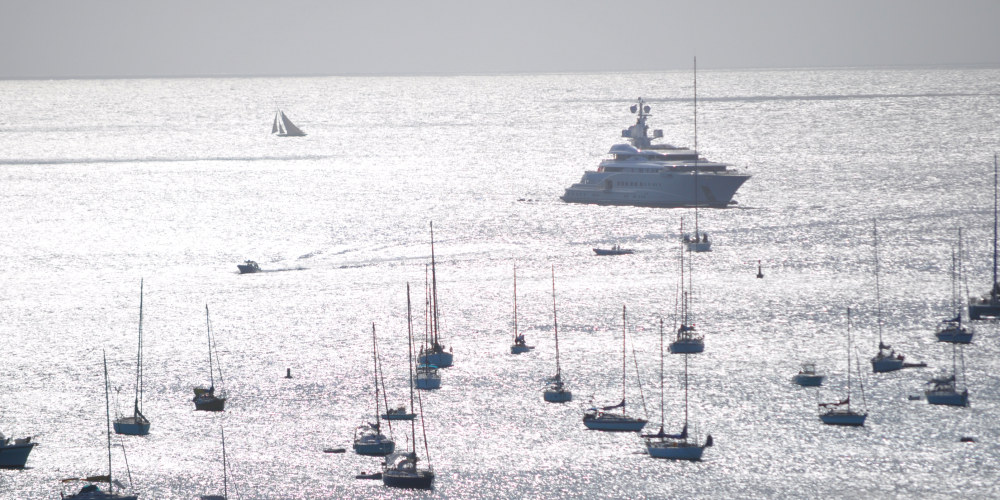 The gaff-rigged Kate returns from the racecourse. Photo by Kimball Livingston

I got that small but meaningful tidbit out of a sit-down with Puma Ocean Racing skipper Ken Read on the final day of competition at Les Voile de St. Barth, where Read spent the week aboard David George’s winning maxi sloop, Rambler. Their performance for the week earned George the $65,000 dive watch from sponsor Richard Mille, which sounds like a pricey prize until you start calculating what it cost to get Rambler to the start line in the first place.

With Puma announcing a return for 2011-12 and the Volvo race route now complete, there was plenty of elbow room for looking forward, and back. We were a foursome: Two-time US Yachtsman of the Year Ken Read, me, Kate Laven for London’s Daily Telegraph, and Carla Anselmi for Italy’s Yacht Capital. 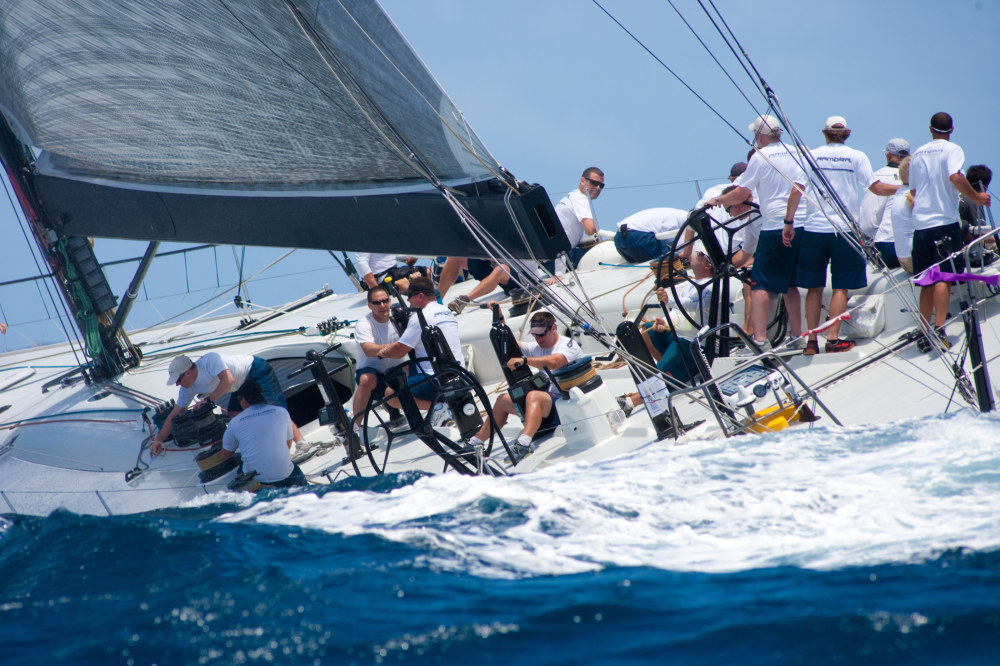 “Puma saw bumps in their sales everywhere,” Read said. “What they were shocked with—”

“Of course there was a bump in local sales at every local stop, because Puma didn’t just have a team, they were the providers for the Volvo Ocean Race. What they weren’t expecting was the increase that happened regionally, even nationwide in some of these countries that we went to, because it was in the press so much. And it was not just the sailing market. They thought they were going to create a sailing market—and they did—but then they helped their whole market. ”

Even in the USA? 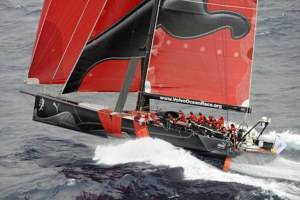 “The Boston store to this day is the highest revenue producing Puma store in the world. Puma loves the Volvo. Jochen Zeitz [Puma AG Chairman and CEO] calls it the rock and roll of sailing, and it’s true even if I’ve said it a million times. You look at Usain Bolt, who is the cornerstone of their sports marketing, and he is no normal sprinter. The Volvo is no normal boat race, and what we have is no normal-looking boat. Puma likes to break barriers. Another benefit they didn’t anticipate is, figure, they’ve always sponsored teams, but they’ve never owned a team before and now they have a team, Puma Ocean Racing, and it’s brought the whole company together. There’s a synergy.”

And our setting, Les Voiles de St. Barth, was created for a business purpose, to offset a dip in island tourism that historically follows Easter. As inaugurals go this one had a difficult leadoff—high profile boats such as ICAP Leopard cancelling at the last minute, and Rambler sailmaker Spike Doriean dying in a freak fall in his hotel room—but the regatta has legs; the event has a future. Read and a few hundred of his closest friends have spent the last week sailing the Caribbean tradewinds in a mix of hotrods and classics and standard-issue production boats in races that (sorry) ramble their way among tiny islands that serve as turning marks and rarely drift off-station. It’s a different course every day, across crystalline waters at 18º north, and this is good. 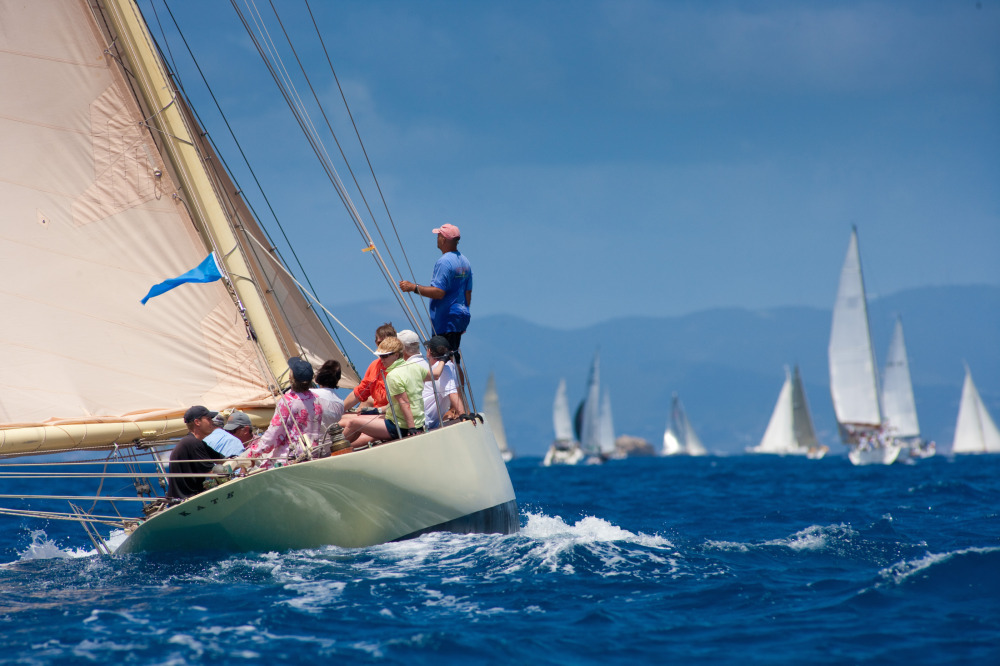 Sailing in paradise is an easy sell, but I do believe Ken Read’s mind keeps returning to Volvo prep. Certainly that’s what our three journos had in mind—

So, you’ve made the announcement that you’re in. How long have you been working toward this?

“I had a breakfast meeting with Jochen Zeitz the morning after we finished in Russia in 2009. There was nothing close to a commitment, but that’s when we started planning. Then we got the good word right after Christmas. It was a nice present. But it’s different, too, because we had to find a sponsorship partner for Puma [enter BERG Propulsion] because, with the global situation, they didn’t feel their pockets were as deep as they were a few years ago.”

“Out of coincidence, almost the same.”

Race organizers have introduced a number of changes aimed at reducing costs and encouraging participation. Only one new boat per team is allowed, and two-boat testing is outlawed. This cuts into the armaments race straight off. The number of sails is limited, and headfoils are banned in favor of furling or hanked headsails—to reduce foredeck exposure. The boats are simply too fast, and there’s too often too much green water washing down the deck to send people up there if you can avoid it. All-up hull weight has been increased, but changes to the hull-design specs are minor, Read said:

“The old boats were a little stiffer, but the big difference will be the sail inventory. The playing field should level a bit because, as designs mature, boats tend to typeform. In this last race we were sailing within sight of each other so much of the time, and I can’t imagine that it won’t be even closer next time. That’s cool for the sailors because you’re part of the process. You’re not just letting a fast horse run.”

And the logistics of a one-boat campaign?

“It’s different from a two-boat deal, where you’re figuring out how to play leapfrog to make both boats faster. With one boat it’s a different mentality, different training, different design schedule, and we’re having the internal debates right now. If the designers had their way we’d put the boat in the water four and a half minutes before the start of the race. If the sailors had their way the boat would be in the water three years before the race.”

And your designers would be?

“We’re working with a design group. That will be announced in about two weeks; people who have a good track record.”

Any chance of a second U.S. entry?

“I haven’t heard of any. But there’s a good chance of ten boats, and some America’s Cup teams might jump in.”

“I don’t want to steal anyone’s thunder, but we all hear the same rumors.”

Will you go with the same group the whole way?

“With our new core group, we’re feeling each other out on questions like that. The chemistry is the thing. On a boat like Rambler you hire 25 guys and throw them together for a week at Les Voiles de St. Barth and everybody gets along. Throw them together for nine months of being freezing cold, boiling hot, soaked to the skin, without enough food, and you see the best and the worst in all of us. If I’ve learned anything it’s to spend more time before the race getting the chemistry right, so when the shit inevitably hits the fan you’re prepared. Everybody can do the job physically, but then it becomes mental.”

And now you’re required to have three under-thirty’s.

“We were lucky to have three under-thirties in our last group, and only one of those graduated. So we have two that are probably coming back, Shannon Falcone and Michi Mueller, the big German bowman. I’ve been sailing on Rambler with Andrew Lewis, and he’s a probable too.”

Should the media person be part of the crew?

“No, definitely not. Two races back I did the last four legs on Ericcson, and the media guys were sailors, and it was exhausting. Ericsson had two guys doing it—by rule you had to send a certain amount of footage each day—and they would literally just grab a camera, punch some buttons and send in whatever. Shockingly enough, the footage wasn’t very good. This last time around it was quite a bit more professional, and the plan is for media people to get a lot of training this time and raise the level a notch. With us, whether they get trained by Volvo or trained in-house, it will be a professional effort.”

Will Rick Deppe be back?

“Can’t say. Since Ricky became famous and won the America’s Cup with Oracle, I don’t know if he’s taking my calls anymore.”

A TOOL FOR SAILING

I won’t claim that I went deep, but I took a stab at understanding the local culture in St. Barth. So, for those of you who care, here we go. 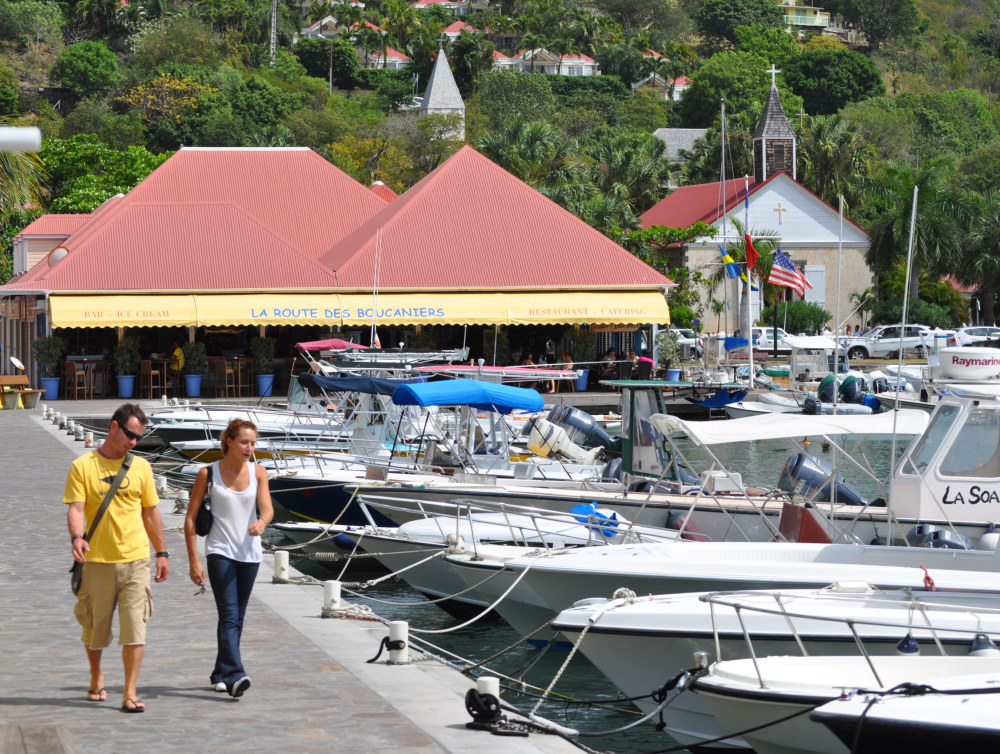 First off, I was surprised to learn that the regatta was run mostly by volunteers from the St. Barth Yacht Club. No, that’s not a YC on the American model—you can’t order a hamburger in the restaurant, or even a croque-monsieur, because there is no restaurant—but they have a good thing going. Pierre Monsaingeon offered an orientation. And Pierre would be . . .

Pierre Monsaingeon would be an architect who raced the progenitor of the Volvo, the very first Whitbread Race Around the World, 1973-74, aboard Pen Duick, with the father of French sailing, Eric Tabarly. They were fast, and they won the second leg, but breaking your mast twice in a deal like that ought to be enough to write fini, and so it was.

Monsaingeon came to St. Barth 35 years ago, not planning to stay, but he stayed. 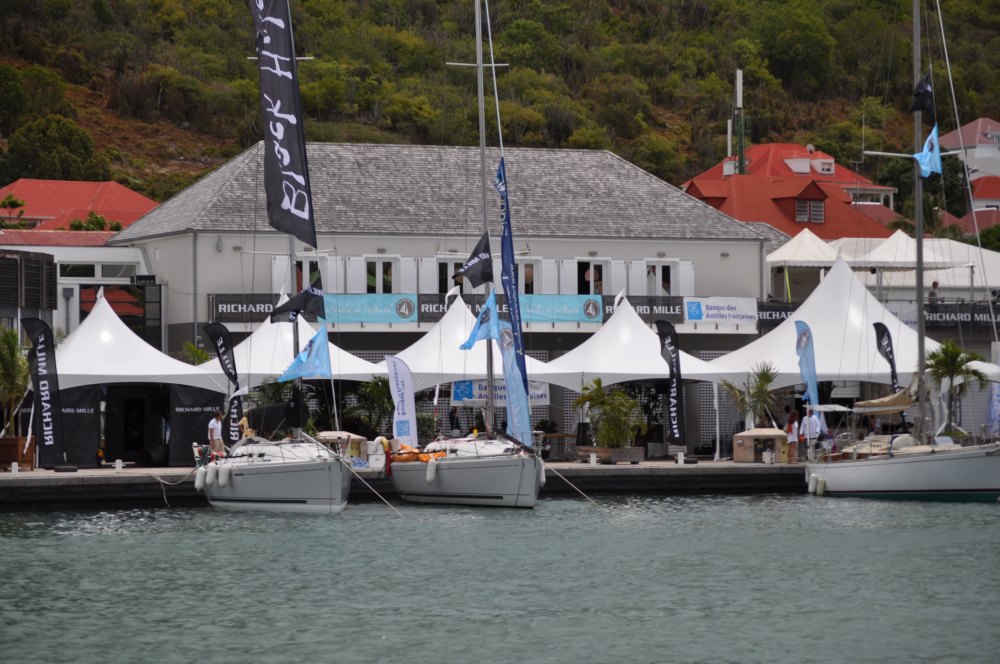 As an architect, he might have been a fan of more-is-more building, but that is not the island’s ethic. When the population doubled in the 1980s, “We tried to slow down the construction,” he says, “All of us tried, the administration, the local authorities, and regarding the pressure and the money that could have been involved, I think that what we have now is not so bad. Things are pretty well preserved. Not perfect, but pretty well preserved. This has always been a very safe place, for kids and for living. Balanced. It is different from what it was 35 years ago, but the fundamental qualities of the island remain. It’s about the relations between people.” 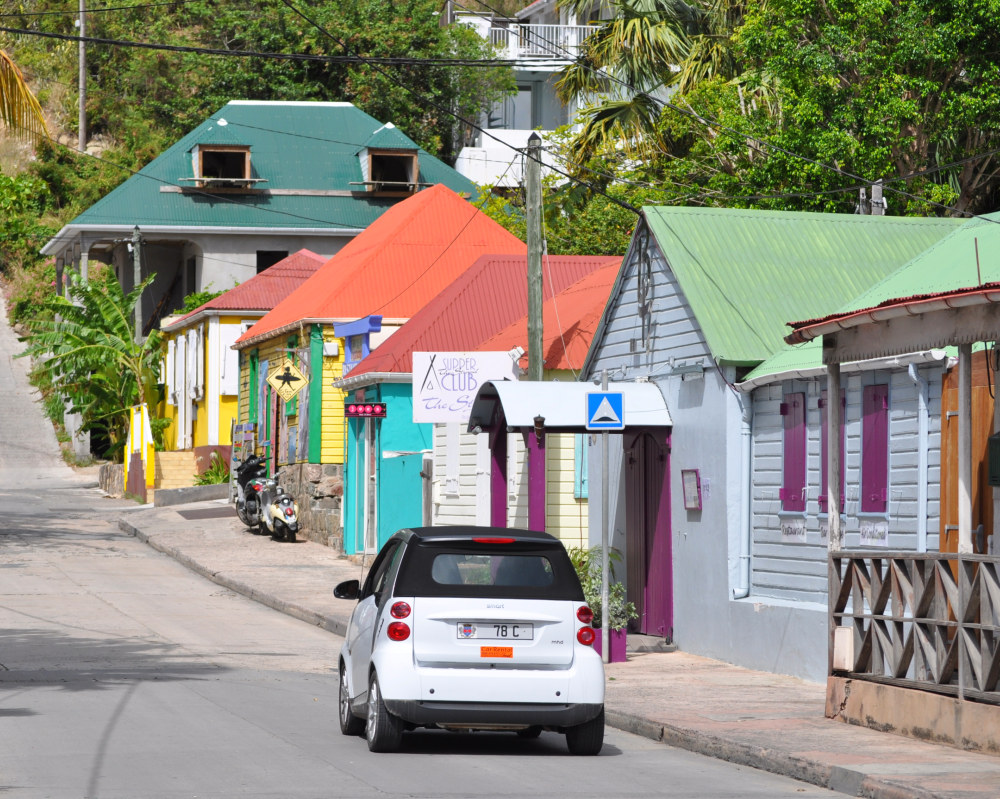 Back street in Gustavia. Photo by Kimball Livingston

St. Barths has a population of 8,000 or so, with small hotels only and a total of 450 hotel rooms plus a villa-rental market. So the experience of living here year-round is satisfying? 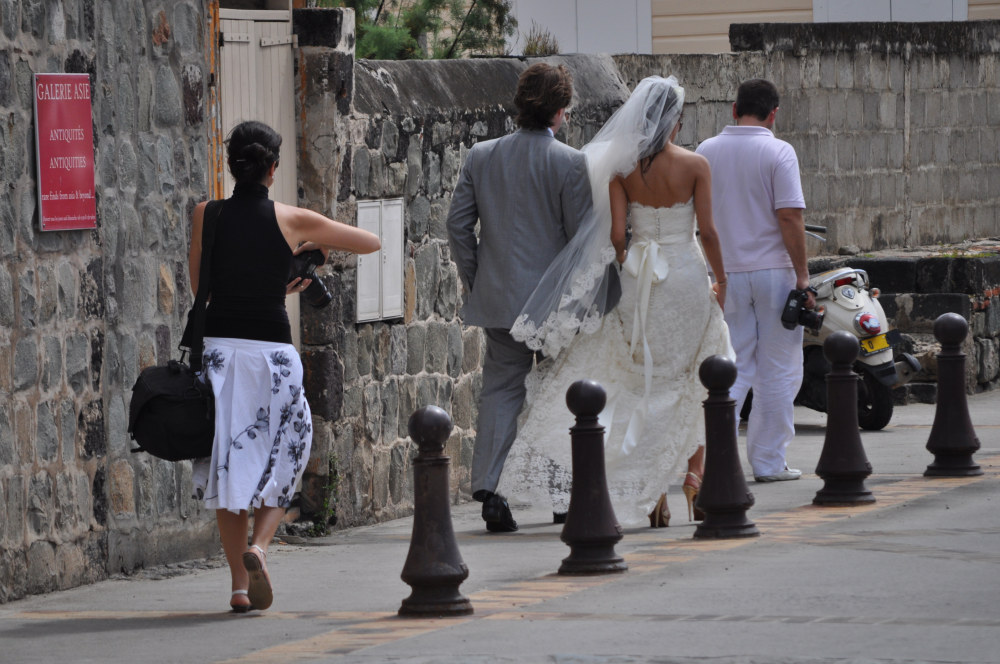 A bride on her special day. Photo by Kimball Livingston

“Yes, it’s satisfying as long as you are working, as long as you have a good interior life or family life. The kids, generally, live here until they are 13 or 14, when school stops and they have to go off to boarding school, but those first years make them very open and give them a good mental structure. We say that St. Barths is a protected island, but it builds what is important, an open mind.”

“The St. Barth Yacht Club is not social. It’s for the sport, for the races. It is a tool for sailing.”

And the weather we’ve had this week, including wind in the twenties and a couple of heavy rains?

“The weather has been normal for the season [wow, how often do you hear that?] but with winds a little stronger than usual. Twenty-five knots. It was perfect.” 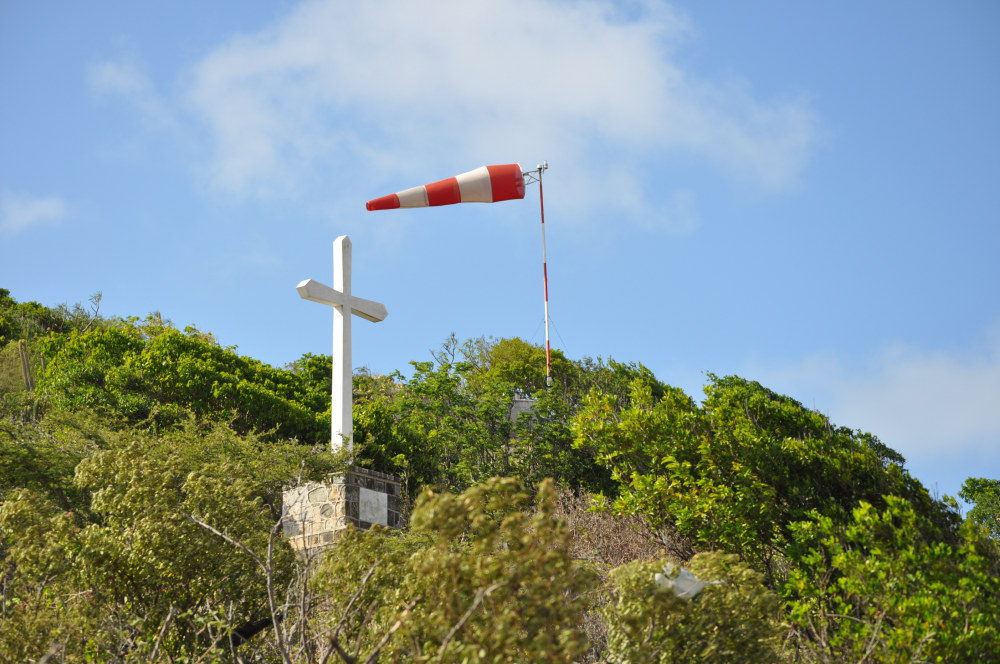 This is the world of the twenty-five Euro club sandwich, and I am pretty sure that fits under the heading of Monsaingeon’s “protected island.”

You can get to St. Barth by yacht or ferry, but a common experience is a pulse-charging ride in on one of Windward Airlines’ de Havilland Twin-Otters, making the dive from a mountain pass to the runway below. The trades funnel through a gap directly above the primary roundabout of the island’s frenetic auto traffic. Wind on the nose is good in a case like this. And then the pilots down-stick here-comes-mama for the runway below . Civilians rarely have such moments in aviation.

Along about 1545 each day, knowing that the next load of incoming has been rounded up at Princess Juliana Airport on St. Maarten, to be hauled in on a succession of closely-timed flights, people gather at the roundabout . . . 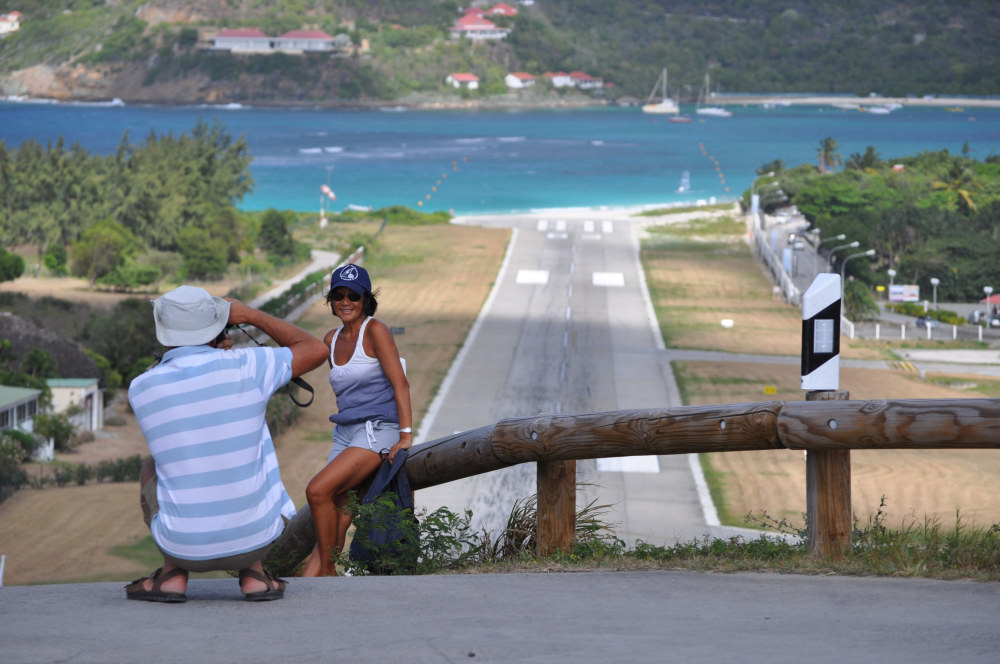 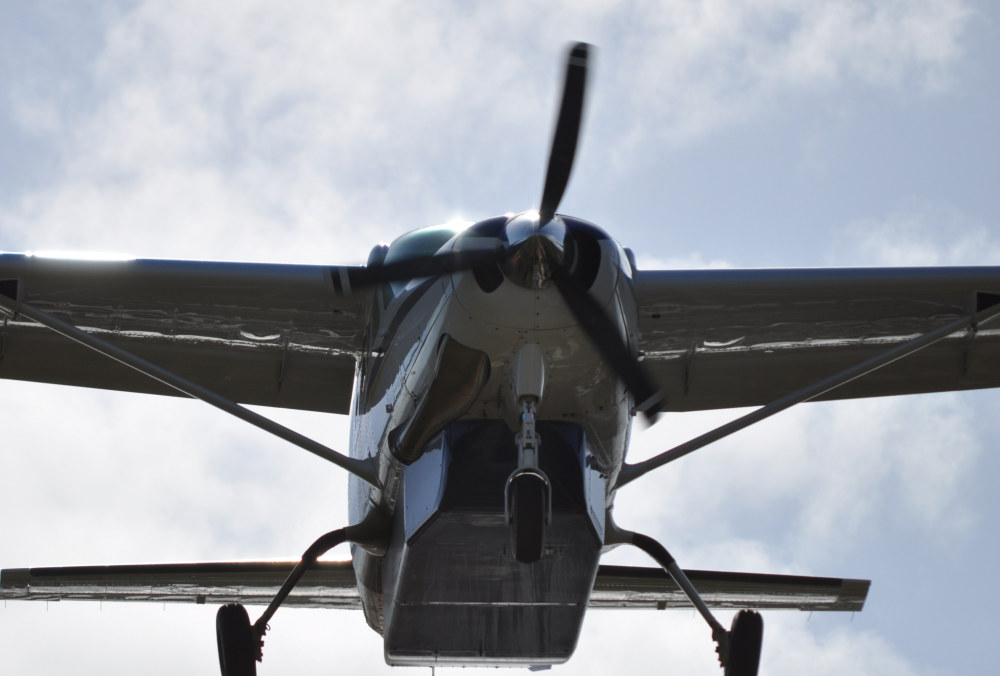 Frankly, riding is cooler than watching. But as for tradewinds funnelling through the pass, I darned near got knocked down.