Nearly three decades later, much has changed, and nothing has changed.

In the “much has changed” department, I find a note from long distance cruisers Pirooz and Ann Barar about spending Christmas in Puerto Vallarta where “just about all the cruising boats, 30-40, congregated.” PV has grown, and 30-40 boats is now a fraction of the fleet, in any given season.

In the “nothing has changed” department, I place the words of the Herron family, from their 1970s cruise on the Aquarius, with father Matt writing that, for a boat family, “Stuffed giraffes were out, also pool tables, toboggans, and dancing bears.” Folding bicycles, however, made Christmas presents that were both practical and liberating for port stopovers.

And on a different scale—

Christmas ’82 followed by only 17 days the storm that decimated the cruising fleet at Cabo San Lucas, driving many boats onto the beach. The wrecked boats included Joshua, famous as the boat that Bernard Moitessier sailed around the world and wrote about in his classic book, The Long Way.

Bernard had brought boat and family to Sausalito, California after years of living in the South Pacific, fearing that his then 11-year-old son needed more and varied stimulation. He had hopes of making it on the lecture circuit here, and the community took him in, but the marketplace just wasn’t strong enough. 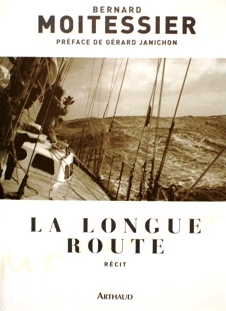 Bernard’s wife, Ileana, was not a sailor. He had singlehanded Joshua from Tahiti. After a year or two on San Francisco Bay, his pockets all but empty, Bernard turned Joshua south, only to be storm-trapped on a lee shore, and Bernard did not have the means to rescue his boat, even though the steel hull remained intact. Instead, he gave the boat to a pair of young men who held every inch of it in reverence (Joshua is preserved to this day, in La Rochelle, France). As Christmas ’82 came on, sailors in the Bay Area were contributing to fund raisers, and eventually Bernard had a new boat under him, but the story never really went right from that point.

I return now to the Barars, one Christmas on from Puerto Vallarta, continuing their long cruise. Now we find them in their 28-footer, becalmed on a Christmas Day, which was the only un-stormy day of an Atlantic crossing. With the seas quiet, Ann and Pirooz treated themselves to a holiday dinner they probably would have foregone, otherwise. Ann recalls: “After dinner we swam, tied to the boat with safety harnesses on a long line. The ocean was crystal clear and warm, but it was strange. Instead of being gathered around a fire with the family, that safety line was such a tenuous, tiny link with the boat, with the whole world.”

I’ll be gathering around a fire today, with friends and family and inlaws and outlaws and kids and tumult and Ann’s reminder in my head of just how fragile are the facts of our lives.

I never was close to Bernard Moitessier, but he turned to me for ideas for promoting his lectures, and I was able to help, for a while. The Herrons and the Barars have fallen out of my compass. But thanks to email I know that Flashgirl, with Warwick and Nancy Tompkins, have wandered in one Christmas Day-to-Christmas Day cycle, unhurriedly, from Sydney Harbour to Thursday Island, at the “top” of Australia. Forever looking forward, Nancy writes, “We have cleared customs, and tomorrow we are off for Papua New Guinea.”

The McWilliams family (“We are Esprit“) is in Indonesia, also a day ahead of me in California, and they had to wait for a high tide before moving to a nearby anchorage for Christmas dinner with Tin Soldier, BeBe, and Imagine.

That’s the sailing life. The tide is rising here, and I’m off. The best to all who share my tenuous, tiny links.