Ticket to Ride, But— 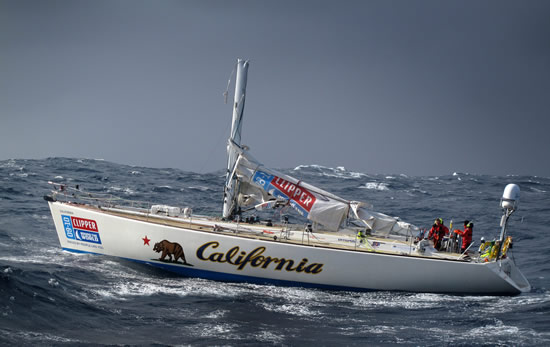 The view from next door. © Clipper Ventures

Donna Womble was very clear on her reasons when she signed up for leg six of the Clipper Round the World race. She was a lifelong sailor, she wanted some sea time, it just wasn’t happening, and this would solve the problem. Leg six is scheduled to leave San Francisco Bay for Jamaica on April 11.

The storm-pounded Clipper fleet is presently thousands of miles west of San Francisco, en route from China, and Womble’s ride, California, reports being rolled and dismasted. That happened Sunday. The news arrived today. “I woke up thinking it was going to be a good Monday,” Womble says. “Now I’m gutted.”

“They’ve already replaced one broken mast in the fleet. I don’t know that there is another spare.”

[On Tuesday morning we have this message: “Rest assured the Clipper Race team is busy sourcing and arranging the shipment of a replacement mast for California so that work can commence when the boat arrives in San Francisco.” We also have word that California crewman Clive Cockram, who suffered noncritical head injuries belowdeck in the rollover, was transferred to the Dutch-flagged tanker, Nord Nightingale, along with one other person, uninjured.]

Fuzzy for a reason: California in an earlier blow © Clipper Ventures

Team Finland‘s mast was replaced in Qingdao, and the boat started for San Francisco two weeks behind the rest of the fleet, then made a stop in Yokohama for fuel and water after discovering problems with the watermaker. Meanwhile, crewmembers from Cork—it went aground and was abandoned on the Singapore-Qingdao leg—are distributed through the remaining nine boats. That would include Gavin Kelly and Noreen Osborne aboard California. This was Gavin and Noreen, wearing the Green a few days ago . . . 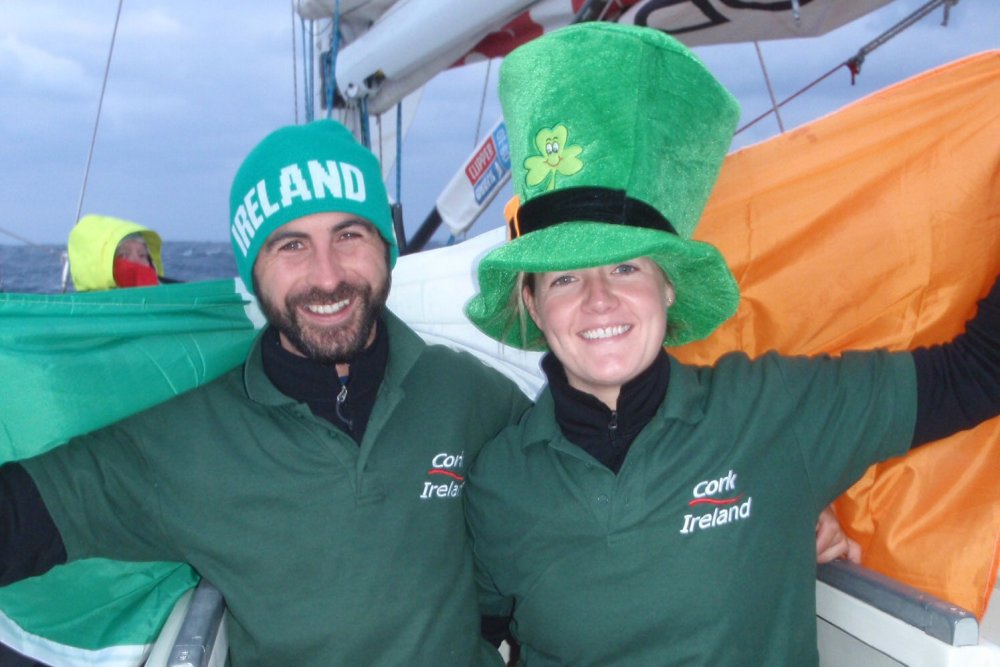 You can’t deny it’s an adventure, but this is probably not going as-imagined.

And they’re paying for the ride. Sir Robin Knox-Johnston’s Clipper Ventures stages these circumnavigation races in matched 68-footers every two years—the Clipper Round the World. Aspiring crew are put through a rigorous training regime and then placed under the command of a professional skipper. Crew can sail one leg or the whole 35,000 miles. There have been problems before, but nothing on this scale.

It was a large wave on the port beam that rolled California and flooded enough water below to wipe out the electronics and most communications. The mast broke in two places coming back from 120 degrees down. No major injuries. An EPIRB emergency signal sent the alert that California had a problem, but no one outside the boat knew the nature of it until Pete Stirling, skipper of Jamaica Lightning Bolt, got close enough to establish VHF contact with California skipper Pete Rollason. 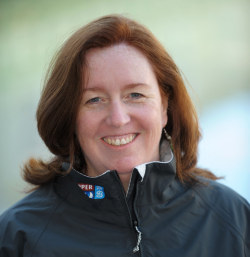 Womble says, “When I saw the reports that they were going to have a storm, I had it in the back of my head, I hope nobody loses a mast. At this point, hardly anybody but Cape Breton Island (from Canada) is really still racing. Jamaica is standing by with California.”

A past commodore of Monterey Peninsula Yacht Club in Monterey, California, Womble says today, I was supposed to meet the boat in San Francisco in two weeks. I was counting on that. I’m in shock.”

Race organizers have put out a superhuman effort to get the fleet this far but had no immediate comment on whether or not California can be made race-ready by April 11. The boat still has a mast up to the first spreaders, and the crew will begin to work on a jury rig as the low pressure system passes and the wind drops. As of early Tuesday, they were still motoring.

TRAFFIC PROBLEMS OFF THE WEST COAST

A California law requiring ships to burn cleaner fuels within 24 miles of the coastline has moved shipping offshore, disrupted traffic patterns around the Channel Islands of Southern California, and created what Marine Exchange of Southern California executive director Dick McKenna describes as, “a situation out there, and we need to do something about it.” Some 40 percent of shipping has rerouted, much of it through Navy missile test areas where traffic has increased five-fold.

Read the report by Zeke Barlow in the Ventura County Star.