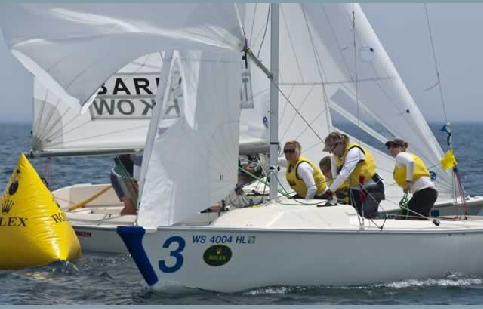 Some days you really enjoy opening the Inbox.

Today, for example, I find this from Genny Tulloch . . .

We just finished up four days of racing in Sheboygan, WI where we won the 2010 US Women’s Match Racing Championship and defended our title from last year! In addition to being our national championship, this was an important event for us because it gave us a chance to get racing experience in Sonars in preparation for the World Championship this September, and the win qualified us to represent the United States in the 2011 ISAF Nations Cup in Sheboygan next September. Our team for this event was Genny Tulloch, Alice Manard, Karina Shelton, and Lindsay Bartel. The competition included Sally Barkow, Katy Lovell, Maegan Ruhlman, and several top collegiate sailors and recent grads that are relatively new to match racing but already showing a lot of potential.

The conditions in Sheboygan were less than ideal for the first three days of racing, with fog, light air, and thunderstorms hampering the racing effort. Although the race committee did a very admirable job of getting in as many races as possible, we were only able to complete one and a half round robins in the first three days. We had some close matches in the round robins and used that time to work on our teamwork and communication since we had never sailed together as a team. We went 10-1 in the round robins, with our only loss to Sally Barkow and her team in the first round. That put us in second place after the first stage, and put us up against Stephanie Roble’s team in the semifinals. 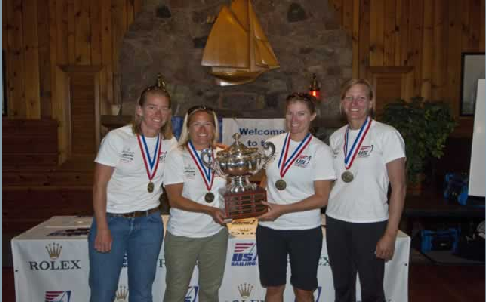 Fortunately the conditions for the semis and finals on Sunday were much more cooperative! The breeze started out at about 3-6 knots with pretty big shifts and puffs across the course. We had a close prestart in our first semifinal match against Steph’s team, but managed to pull ahead on the first beat and stayed ahead to the finish. In the second race, we led them around most of the course and were about 4 boat lengths ahead half way down the last leg. A big wind shift and an error on our part brought them right back into the race, and they were able to roll over us right at the finish line to take the race. It was a tough one to lose, but we were ready to take them on again for the last semifinal match. In the third race we executed our prestart strategy well, and led them off the line and around the course to advance to the finals against Sally’s team.

The finals were first to 3 points, and we knew it was going to be a hard-fought series no matter what. The breeze was up to about 5-8 knots for our first race, but was still pretty shifty. We got a penalty in the prestart, but managed to win the boat and get the right side of the course, which is what we wanted. We rounded the windward mark ahead and maintained our lead on the run, which left us on the final beat, ahead but with a penalty outstanding against us. We covered Sally out to the right side of the course and managed to gain just enough lead that we were able to spin our penalty turn on the starboard layline and still barely lead her into the windward mark. We held onto our lead down the final run to go up 1-0.

During the boat swap the breeze started building, and by the start of the second race was up to 10-12 knots. In both the second and third races, we trailed off the starting line and Sally was able to use her upwind speed in the steadier and windier conditions to stay ahead of us around the course. That put us down 1-2 and in a must-win situation for the fourth race. In race four we came off the line fairly even, but Sally was able to get just out to the right of us and had a one boatlength lead at the windward mark. We managed to close the gap down the run and ended up to leeward of them on starboard heading out toward the layline. Just before the layline we did a double-gybe; Sally meanwhile gybed to port and we had to avoid her, which ended up earning a penalty for her. We took her past the layline and then led around the leeward mark. We maintained our lead up the next beat and stayed just ahead of her on the final run to take the fourth race and bring the score to 2-2.

With 10 minutes to spare before the deadline for racing to end, the race committee started up race five of the finals. We wanted the right side of the course and executed our pre-start strategy well to end up with a split start with us on port tack at the boat and Sally on starboard mid-line. The upwind leg was a drag race out to the right side of the course, and we were able to be bow out just enough that she couldn’t leebow us on the starboard tack layline. We led out of the windward mark by a boatlength, but Sally’s team was able to pull up to us and overlap us to leeward as we approached the leeward mark. But they held us up past their proper course, earning another penalty, and we were able to round the leeward mark just barely ahead. On the final beat we again protected the right side and led by half a boatlength at the windward mark. With a penalty outstanding against them, we were in a strong position and were able to gybe to starboard at the layline to the finish and take the win. It was an exciting series and we were thrilled to come away with the win!

We’d like to thank Sail Sheboygan and the Sheboygan Yacht Club for putting on a great event, our housing hosts Mike and Stephanie Larson, the US Sailing Team AlphaGraphics, Kaenon Polarized; and Gu.