A Bryant Austin life-sized image on display in a whaling nation. © mmcta.org

It’s been a long, long time since I saw anyone twist up an aluminum can and toss it overboard from a raceboat, or any boat. Yes, people change. And these days I see more and more people showing up for race day with a metal water bottle rather than single-use plastic—single-use plastic being wasteful even if yours is one of the few plastic bottles actually going to recycling.

Today is Earth Day, and if life begins at 40, as I’ve heard people claim, the 40th anniversary of Earth Day is good news for the planet and its inhabitants. On one level, Earth Day is corny. On another level, these events attract attention, focus attention, and drive change.

The fact is, I didn’t hear any Earth Day chatter last week when I attended Turning the Tide, a two-day conference at the Institute at the Golden Gate, a program of the Golden Gate National Parks Conservancy tucked into a blessed bight just north of the Golden Gate Bridge. And though I just called it a conference, I also heard it said: “We didn’t want to put on a conference; we wanted a forum for cross-disciplinary action.” In the year since the first edition of Turning the Tide, I’ve often found myself declaring to people how informative/inspiring it was and I’ve probably come across a bit like the Ancient Mariner, compelled to speak. Here I go again.

Turning the Tide is not easy to explain because it’s bigger than one thought. We’re talking the likes of Stanford Nobel Laureate climatologist Stephen Schneider, crossed with the activism of a Mary Crowley whose Project Kaisei will find a way to get back to the Pacific Gyre this summer with scientists in tow to test the contaminant levels, and with engineers aboard to look for ways to effectively extract plastic. It’s Ruchi Jain, talking about developing localized food systems in India alongside foodie-revolutionary Alice Waters, who allowed as how, “There is no such thing as half-good food.”

It’s also the likes of Natural Logic’s Gil Friend declaring, “The job is to reinvent everything in the world in one lifetime,” or at a more hands-on level Suntech’s Scott Son: “We need to be able to demonstrate the true cost of electricity. Dead coal miners are part of the true cost. Look at California; the energy companies installed smart meters, but they did not give consumers access to web sites to monitor their usage and modify their behavior. We’re hostages waiting for a world in which the energy companies make more money by being efficient than by being inefficient.”

And I am doing hellish work here, taking what went on at Turning the Tide—bringing together high level people who rarely have the opportunity to interact—and reducing that to sound bites.

Maybe I can do justice to a sound bite. Maybe that’s worth something. 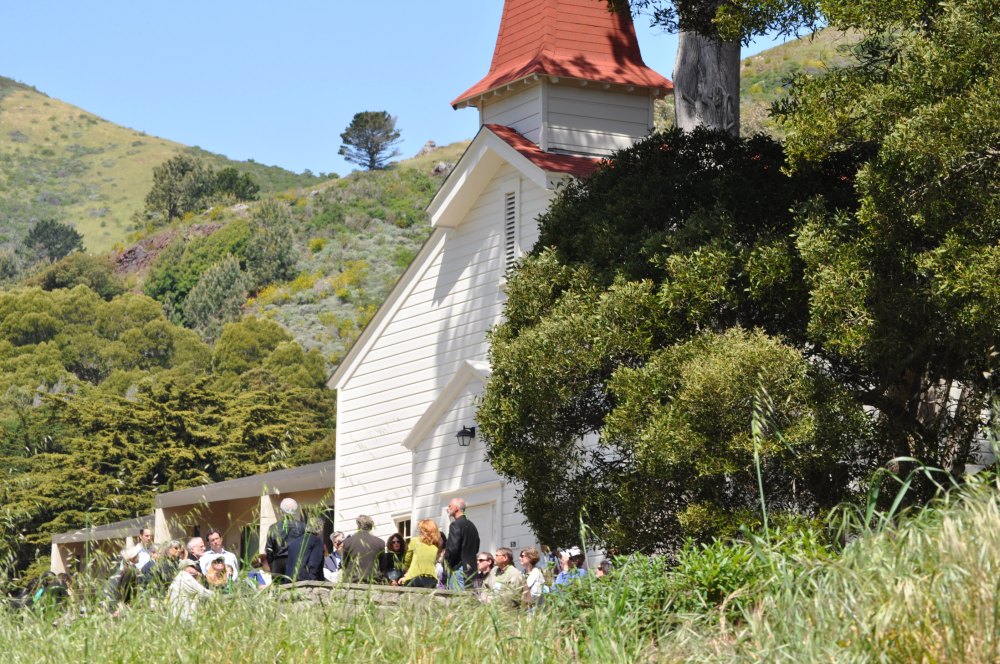 An outdoor session of Turning the Tide. Photo by Kimball Livingston

The sessions also introduced me to expanded possibilities for Google Earth, and there is somebody out there who will want to look into this. earth.google outreach creator Rebecca Moore demonstrated how Google’s mapping technologies have been used to document threats to Australia’s Great Barrier Reef, also to develop opportunities for indigenous tribes to revitalize the ravaged rain forest of the Amazon.

The Amazon’s Surui tribe first had contact with the outside world in 1969 and suffered immediately from disease. The survivors are bouncing back, now, and resisting illegal logging. Under Chief Almir Surui, they approached Google for help and got it. They are mapping and documenting deforestation and reforestation, and it is claimed the Surui will soon be able to measure and sell carbon credits from their reforestation efforts.

Turning the Tide also introduced me to gonzo photographer Bryant Austin, who produces unique, life-sized photographs of whales using a 50-millimeter Hasselblad and multiple frames that he pieces together with hundreds of hours of labor. He exhibits in countries where whaling continues. I love people who are crazy in a wonderful way. Bryant says, “I’m terribly grateful to have had a car that I could sell to fund a month in the field.”

Inspiration struck five years ago while Austin was diving in the Kingdom Of Tonga. He was six feet in front of a humpback calf when he felt a gentle tap on his shoulder and turned to face the eye of the mother. She extended her 15-foot, one-ton pectoral fin and gently let him know that she was watching him. It was at this moment, he says, locking eyes with the mother whale, that he realized what had been missing in the field of whale photography and conservation—an emotional connection.

At Marine Mammal Conservation Through the Arts in Pacific Grove, California, executive director Kate Miller has produced a quality film about Austin’s process and the reception to his work, which he takes to nations that continue whaling. You can view the full movie online at their web site or taste the trailer here:

Trailer: In the Eye of the Whale from MMCTA on Vimeo.

What else? Our two days wrapped up with a prescreening of the Disney Nature documentary, released on Earth Day, OCEANS. It got me. All of it was beautiful, and there were moments when I was sitting there thinking, Oh man, I have never seen footage like this before. Co-directors Jacques Cluzaud and Jacques Perrin must have worked like dogs to get this stuff. I considered linking the trailer here, but on my computer screen it did not take me back to the experience. See OCEANS on the biggest screen you can find.

And now I’ll close with apologies to the Turning the Tide speaker whose name got disconnected in my notes from my leadoff quote about the Pacific gyre, which applies equally to the newly-buzzed Atlantic gyre, and I bet he won’t mind if I repeat his words:

“The problem is in your refrigerator.”

And, oh yes, David de Rothschild checked in from far at sea, aboard Plastiki . . . 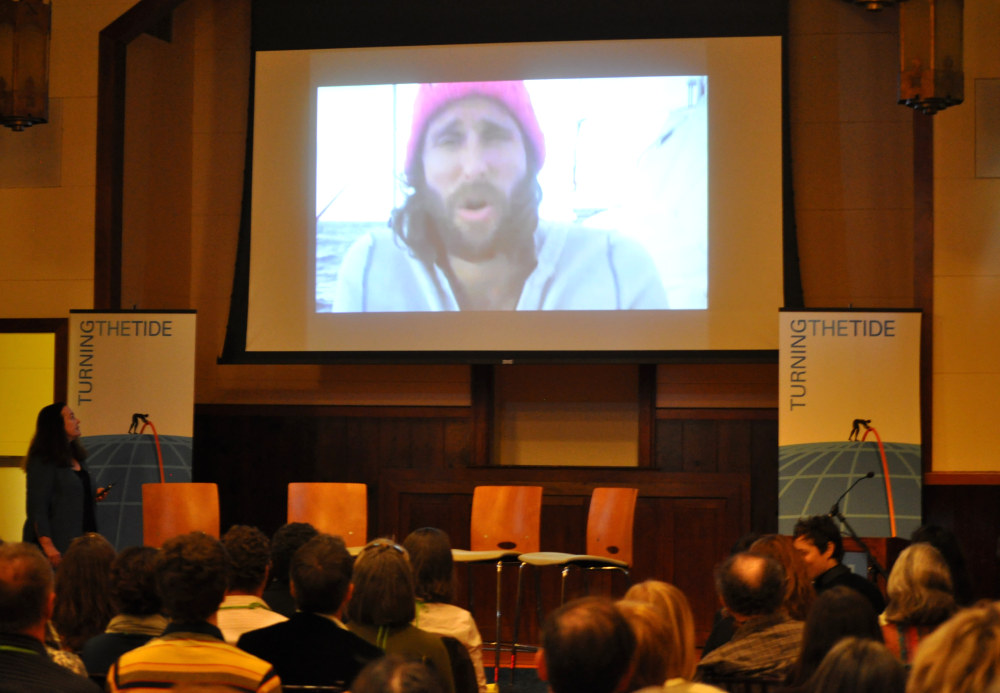