Under Sail on the Eagle
All 22,000 square feet of sail

Once upon a time I was invited to sail from Portland to San Francisco on a rather special ship.

And that raised the question, what do you do with 22,000 square feet of sail? The Captain of the US Coast Guard Cutter Eagle said, “It’s basic sailing, just a lot of it.”

We were at sea for three days, downriver on the Columbia to salt water at Astoria, then south along the Pacific Coast from Oregon to California and the Golden Gate. Being a small-boat sailor, I had my epiphanies.

Imagine a medium breeze near or forward of the beam. You will see the square-rigger crew “fanning” the uppermost sails—trimming them farther aft—to account for higher wind speeds aloft. (Big-boat racing crews have a different tool kit but similar challenges.) In light air the uppermost sails of a square rigger are again trimmed farther aft than lower sails, to act as telltales and warn the driver if it’s time to fall off. Aboard the Eagle, however, you will not hear too-cool-for-school racer lingo like “driver.” Before we pulled out of Portland town, the crew was mustered on deck and the cadets were told, “Learn all you can. This is how you become a Coast Guard officer.”

I don’t know what may have been going through the minds of young cadets as they stood straight, listening to those words, but I have a notion of what they were thinking, three days later, as the light failed and the wind rose and there was a bite to that wind, and the ship was flying too much sail and came the call,
ALL HANDS!

All eyes were aloft, up up up to the rigging. There’s this other saying aboard the Eagle: 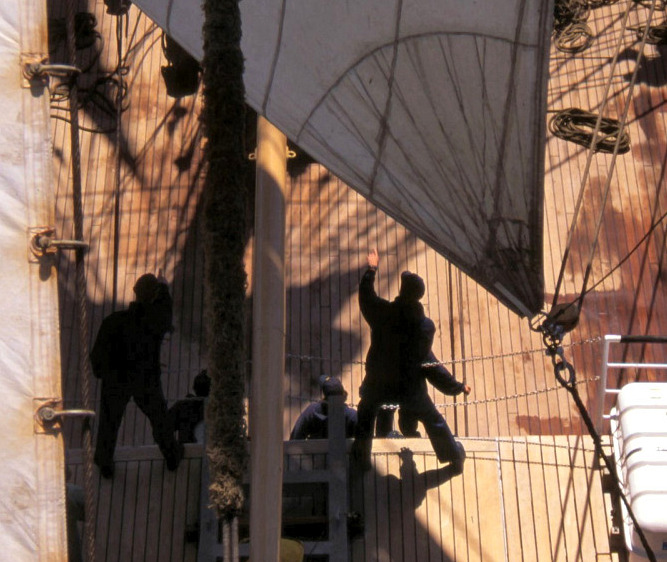 One of the fundamentals of going through the Coast Guard Academy at New London, Connecticut is sailing the Eagle. Most cadets do not come from a sailing/voyaging background. Most have never been to sea when they walk aboard the Eagle for the first time, and on any voyage there is a mix of upper-form students who know the drill, plus raw recruits.

They are required to learn every sail and every line. You might see them of a mid-day, in a meandering trance, or so it seems, but in fact they’re tracking slowly around the deck, classroom pamphlets in hand, touching first this line or that and reciting the names to themselves. 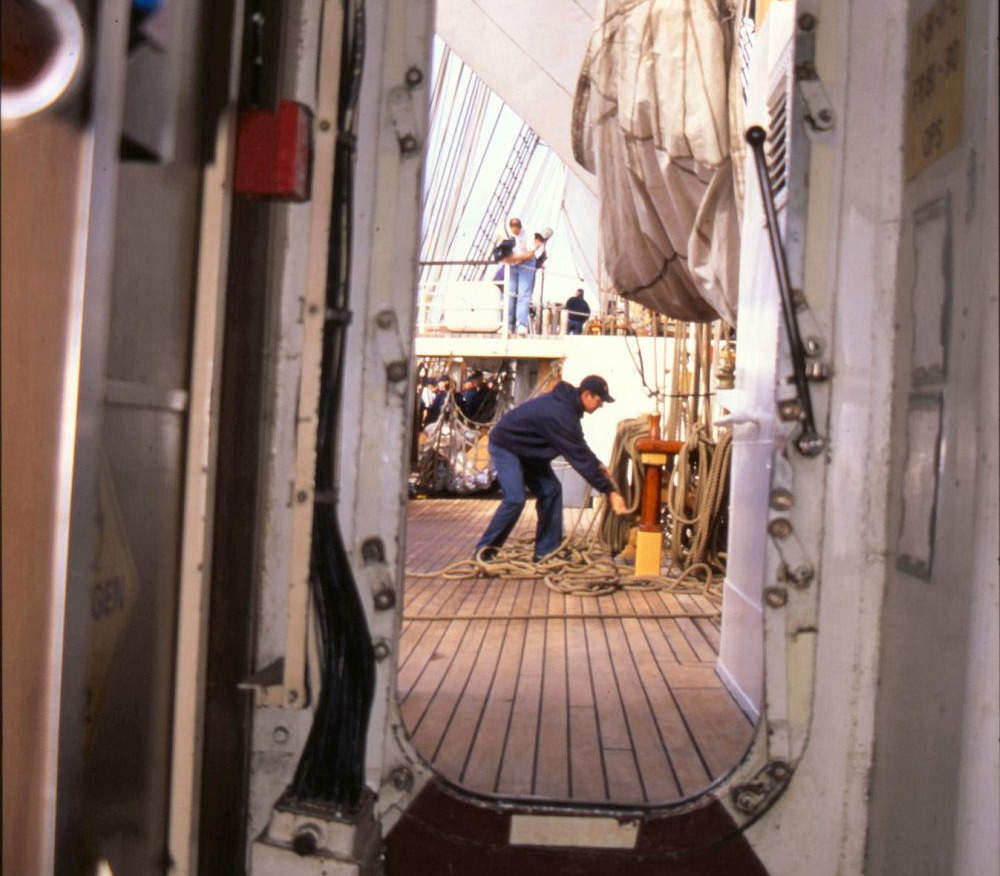 The journalist in me decided that I was going to write out a prescription for how to tack the Eagle. I went to the book, and how-to-tack ran twenty-three pages. The end of that.

But there is no end to basic services, some of them performed on hands and knees as if in prayer. Perhaps because the grip clutches something about the size of a Bible, the phrase for this is, holystoning the deck . . . 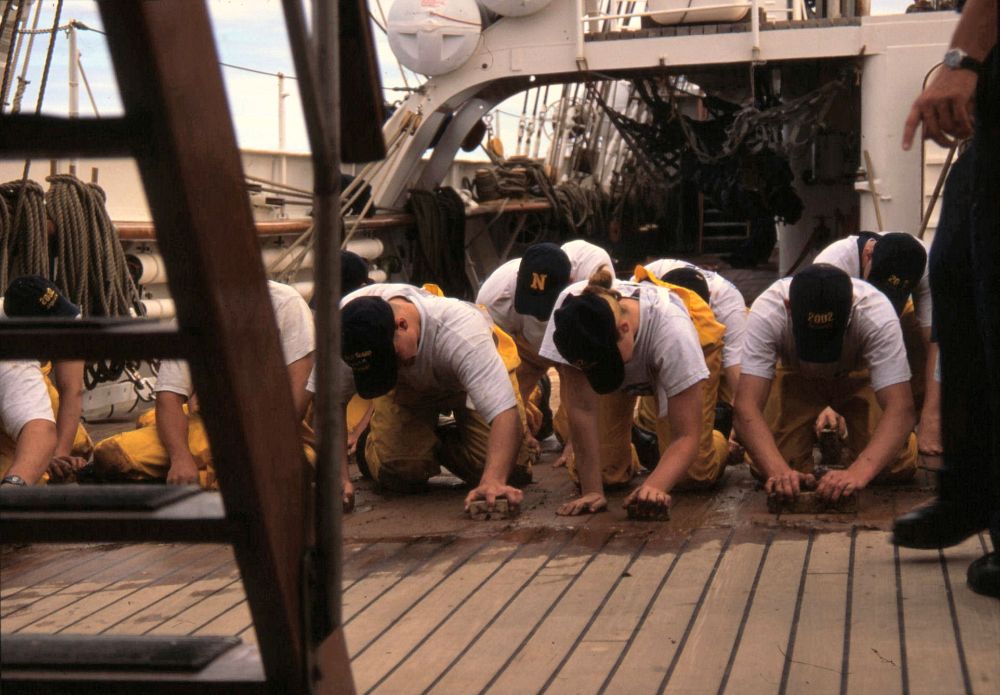 Do they keep the brass binnacle polished? Check it out on the right . . . 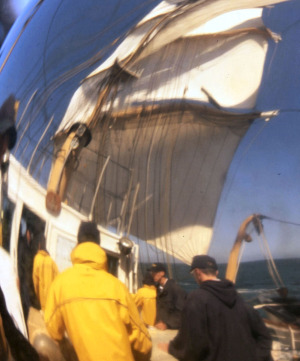 The hull is .4-inch steel plate.

Built in Germany and seized as war reparation at the close of hostilities, mid-20th century.

Eagle carries a crew of 6 officers and 55 enlisted to ensure the safety, training, and bonding of the next generation of Coast Guard officers.

This is a leadership laboratory.

This is about teamwork.

As one officer put it, “You can’t gainfully employ 120 cadets in one shot on any other ship in the Coast Guard or the Navy.” 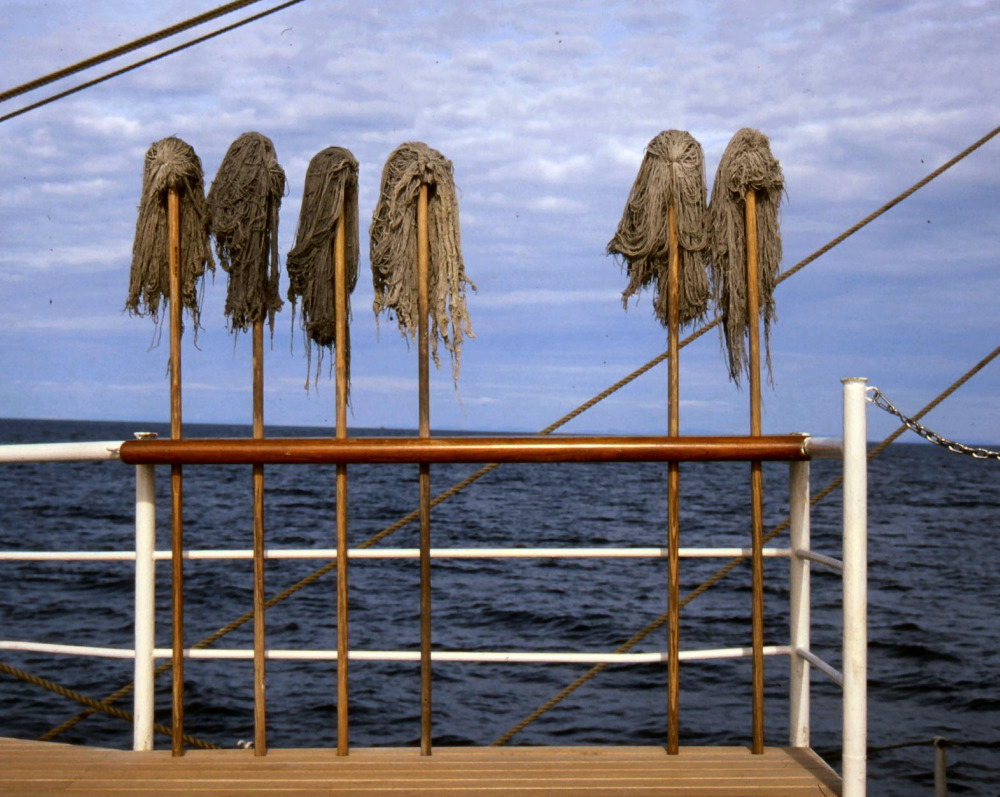 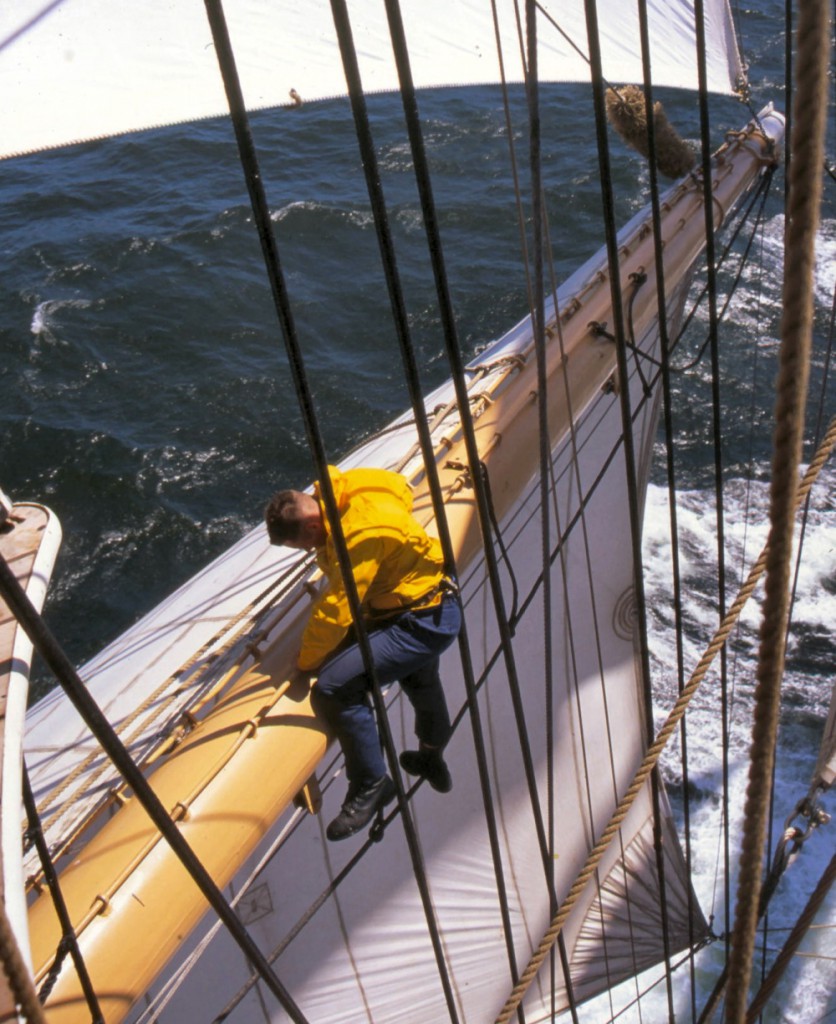 My only job was to walk around and take a few pictures and smile at people who called me Sir.

Several conversations with long-serving sailors reminded me of the good work of the Coast Guard Foundation, an outfit that serves mostly the enlisted ranks, raising money for scholarships for service offspring and useful things like gym equipment and computers for remote duty stations.

Oh, you thought stuff was like that was taken care of?

Because they jump out of helicopters to haul victims into rescue baskets . . .

Because they go to sea when no one else wants to go . . .

[Their saying: “You have to go out, you don’t have to come back”]

Sure, I’ve heard my share of stupid-things-the-Coasties-did stories, but if cowpies are raining down on my head some day, I’ll be looking for that big orange stripe.

The average Coastie is 30 years old, has 3 kids, and makes 30 thousand a year— 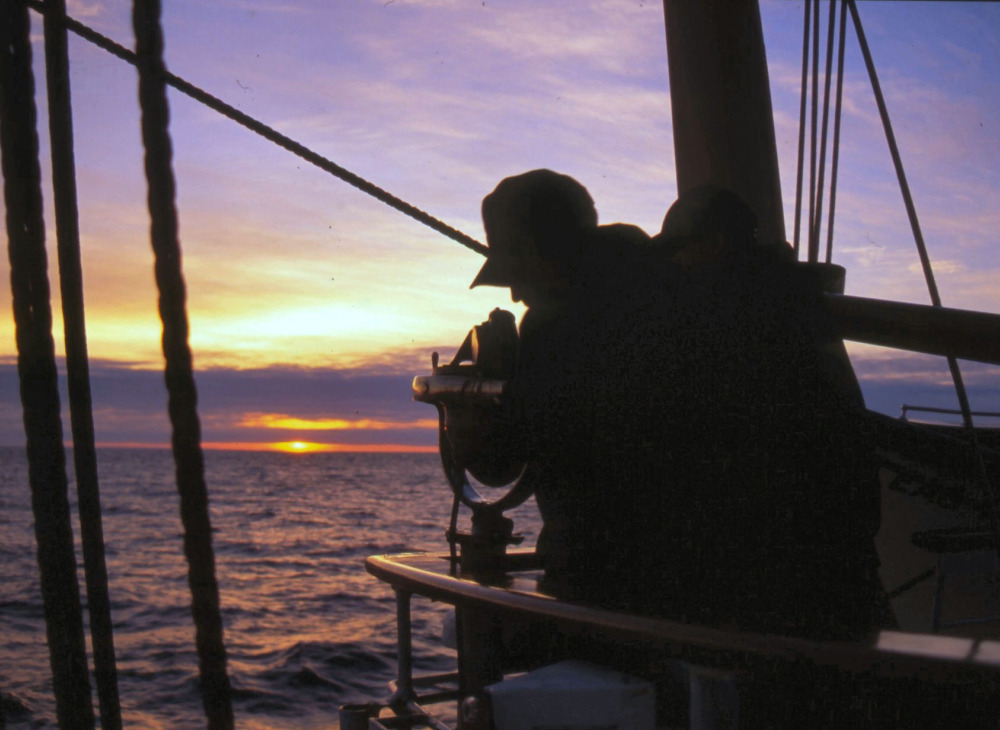 Through the Coast Guard Foundation, I met remarkable people. One of them was Lieutenant Commander (soon to be promoted) Alda Seabrands. She was called in for the shouting at a Foundation fundraiser.

Alda had been flying a pollution patrol over Puget Sound (meaning, no rescue jumper), when her helicopter was diverted to SAR, Search And Rescue. A fishing skiff had capsized, spilling two people into white water. The chopper made the scene quickly, dropped a basket, and one man climbed in. He was hauled aboard and the basket lowered again. The second man put one arm over the edge of the basket, then rolled unconscious. Alda told her copilot, “It’s all yours, Binky.”

OK, she didn’t exactly say that, and I’m sure the events, however dire and hurried, were more complicated. But Alda Seabrands was flying as Pilot In Command when she, in full awareness, left her post. As a certain Admiral put it to me, “We had to decide whether it was a court-martial or a medal. We decided it was a medal.”

Throughout our three-day passage from Portland to the Golden Gate, the ship received visits from service helicopters and cutters, all eyes out to see the Eagle. Their Eagle. I began to get it. What’s hard to put into words. Eagle is magic.

On our last day out the wind piped up and the old girl was hauling the mail . . . 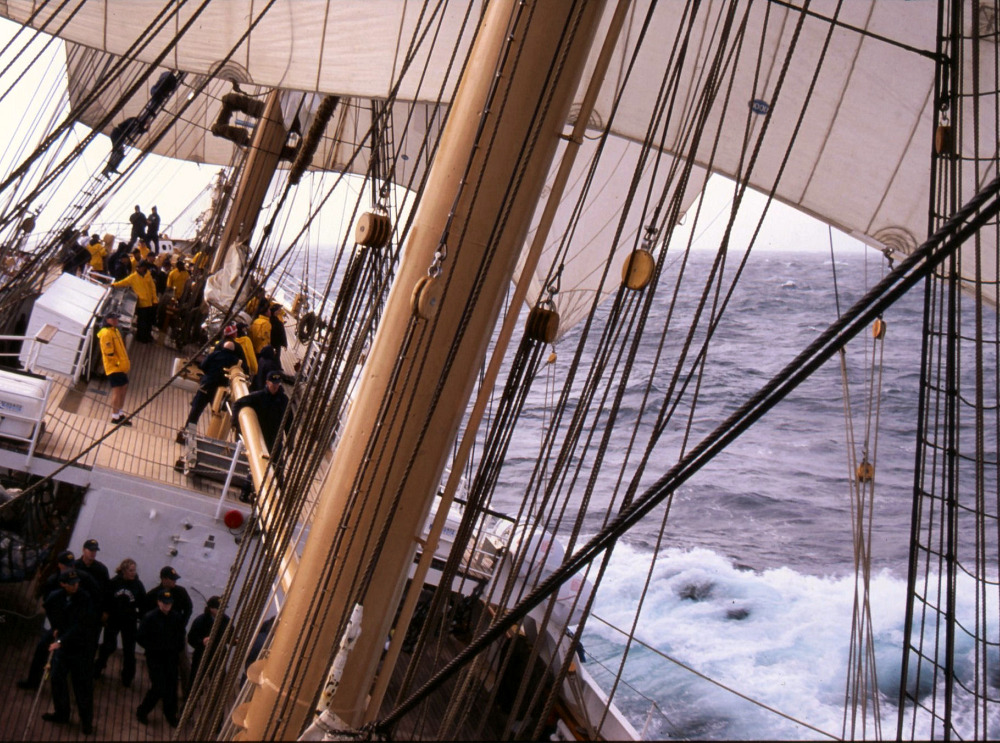 It was a great ride, but just between you and me, the quarter wave was scary . . . 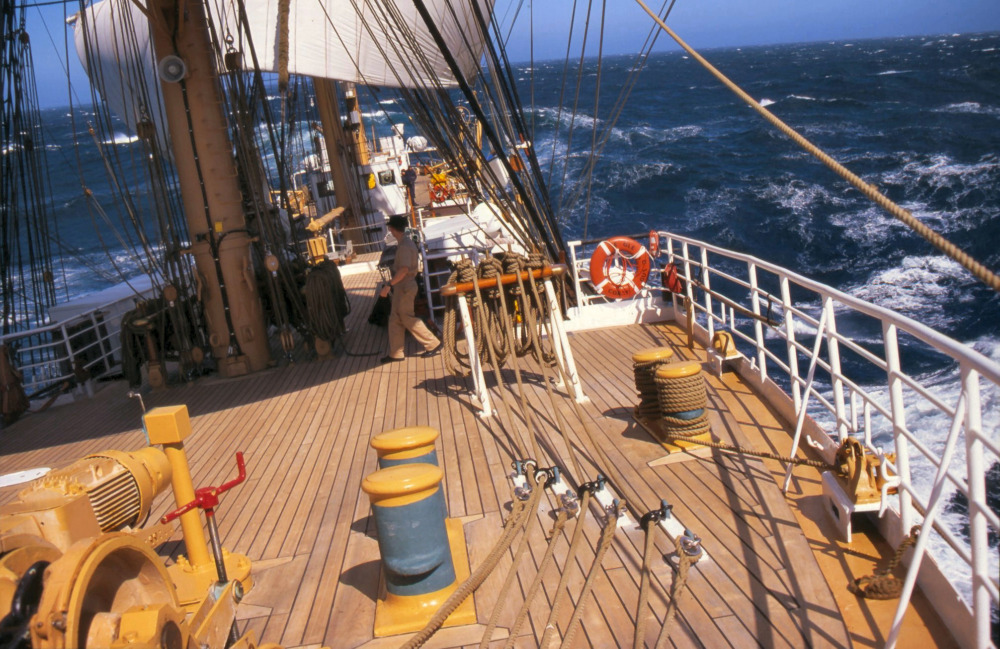 And true to form, along about sundown, there we were with too much sail up and the breeze rising. All hands, was the call, with many ordered aloft, and remember, we had newbies in the bunch who had never been to sea. When the show bogged down, the bos’n cut through the howl of the wind with a voice that carried the length of the ship, LIGHT A FIIIIIRE UNDER’EM!

Then he turned to the fellow next to him and remarked, “As a bos’n, I could lighten up. But why would I?” 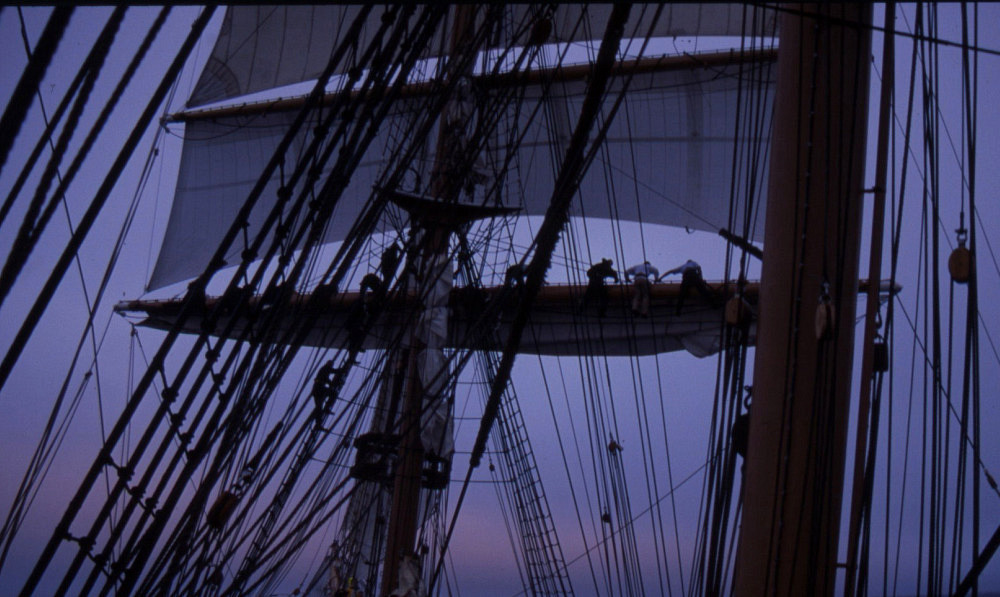 The wind rose. The night fell. The cold deepened. Figure it takes a minimum of ten cadets on deck to handle a single sheet in 30 knots of breeze. And each line had to be precisely eased to compensate as sails were furled high overhead or somebody(s) would get sail-slapped serious-like, and those were real people up there, scooping handfuls of canvas and dumping them into the furl. Very real, very young people, power-pumping adrenalin and how.

And so the job was done. Another crop of young cadets scrambled down from the heights to an emotional high that kept them floating above deck level. Slapping each other on the back. Sharing sillygrins. Exhilarated and relieved and ready for the next call to duty. A little less young. Shipmates for life wherever whenever they might meet. I saw the payoff for the Eagle, the leadership laboratory that is meant to instill, “an intimate knowledge of wind and sea.” I was a witness. If you don’t let go, you don’t fall.

There were many moods in our three days offshore, leading to our passage through the Golden Gate as I climbed aloft, knowing our masts would not hit the bridge but it always looked as if they would, and yonder I could see my house up above Baker Beach and all those people in boats waving from way down at sea level and I was telling myself, this is a moment I will remember. 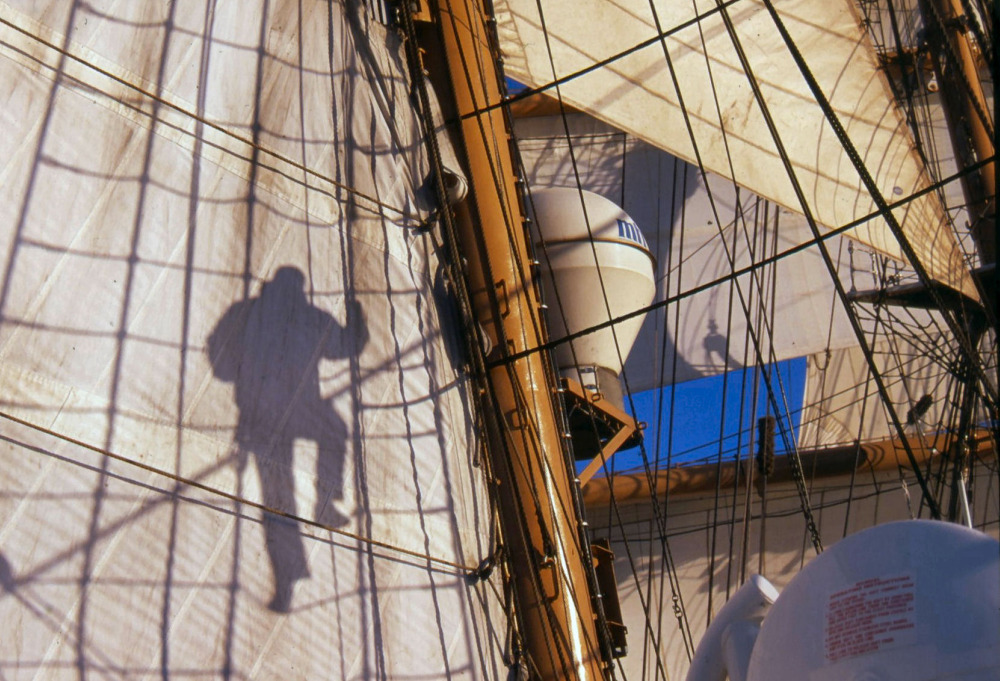 And I do remember, but I recall just as vividly the quiet, early passage down the Oregon coast, with the deck at times almost deserted while classes were in session . . . 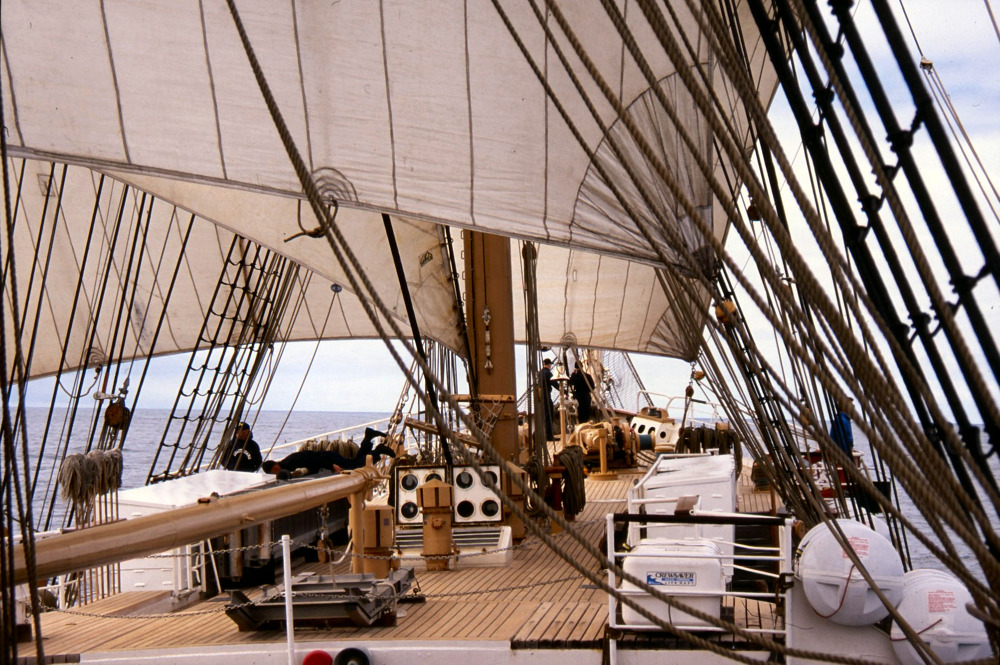 And the fog that swallowed us for a while. I observed the rotation and the youthful earnestness of the forward watch, and I was reminded of the unofficial motto of the service . . . 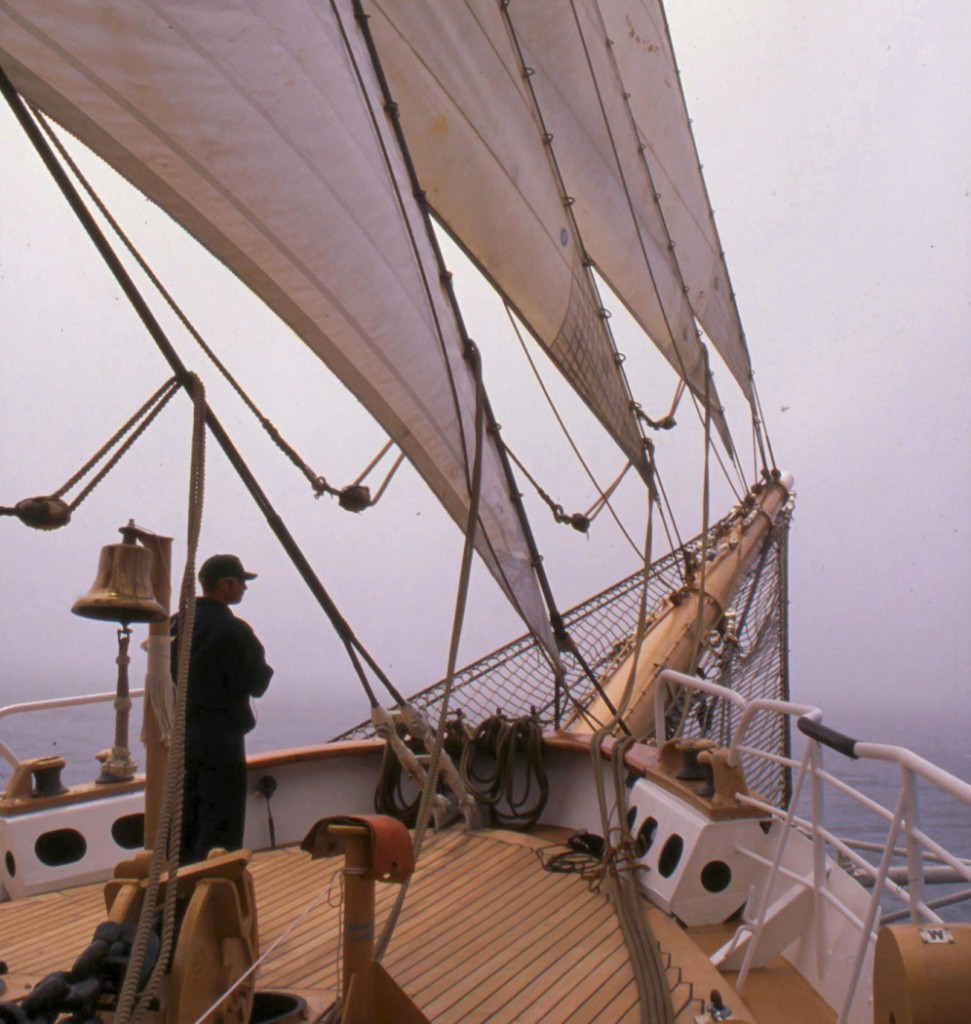 Elvis, if you’re out there, we’ll find you.