Where do old racing sailors go? They don’t just fade away. It’s been 39 years since Garry Hoyt won the Sunfish Worlds—a title he shares with John Kostecki, for one—and a lot of the time since was spent cooking up boat designs and systems to make sailing more accessible, more affordable, more popular.

The first time I unheard an electric car roll by was a revelation, and the moment resonates with Hoyt’s assertion that, “ten years from now, the recreational use of carbon based fuels on the water will be accorded the same level of social scorn that smoking now receives.” 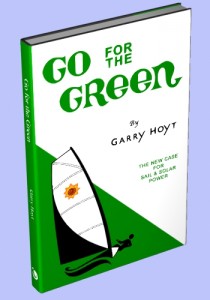 If the man is right, or even half right, we’re on the cusp of tremendous changes, and Hoyt’s new book wades right in. That book would be Go for the Green: The New Case for Sail & Solar Power. The heart of it is the author’s claim that the legacy of sail and the potential of sail are “of serious importance” and the future is ours to claim.

Being Garry Hoyt, he has notions about everything from sail training (must focus on soloing on day one) to rig configuration (must simplify) to how to create the next generation of motorsailer (must appeal to motorboaters). I guess you know I wouldn’t be writing unless I believed this slender volume is worth the read.

And here is an alert. You can’t rightly read the following, which is an indictment of the restrictiveness built into sailboat racing, unless you understand that our author is a longtime Finn sailor who loves racing, loves one design sailing, and loves the Finn class. Here’s Hoyt:

“With the advent of steam power, sail abruptly lost its exclusive commercial and military value, and technological attention quickly turned elsewhere. Sailing drifted into the backwaters and eddies of a rich man’s sport and precipitously descended from primary transportation for everybody to recreational diversion for a few. What little design urgency remained was focused on racing, and racing quickly developed rules in the form of exclusions and complications designed primarily to keep the game intact and comprehensible only to those already playing it . . . rules are relatively detrimental to innovation, and so sailing, which had previously invited and rewarded innovation, began to resist it and even outlaw it. These tendencies were a surefire formula for shrinkage and stagnation.”

And there we were.

Apparently this is a book review that I’m writing, or something akin to that, so I would be doing no service to the author to quote the text in full. I would say, rather, that he has a refreshing way of framing the basic physics of how boats sail, and many a developing sailor would benefit from that portion of the book alone. Developed sailors will already be familiar with some of the rig innovations that Hoyt explores—various combinations of free-standing masts, Hoyt jib booms, and offset rigs—though the combinations will be new, along with the explicit connection to the high cost of low-cost petroleum.

What jumps out at me, however, is a boat/sail design that is not derivative of anything, even of Hoyt’s own work. It is the “solar cell sail” that is meant to carve wind downwind-only, while harvesting enough solar energy to return upwind at that magical pointing angle of zero degrees—silently and without belching smoke. Hoyt concedes that such a boat is “not likely to please either hard core sailors or die hard powerboaters” but perhaps could “create a new category of boating pleasure.”

If a sail is asked to work downwind only, he points out, the hull can be shallow and clean: “All we really need is the barn door effect of ample sail area, so we could get rid of complex rigging and exotic sail cloth. And why not go with a rigid carbon sail structure that could be surfaced with power producing solar panels? And while we’re about it let’s make this rigid sail capable of folding up to the vertical to maximize wind collecting power and down to the horizontal to maximize solar collecting capacity. The horizontal mode would also minimize wind resistance under power.”

I suspect that Garry’s not expecting to see one of these on the water soon. For now, he’ll be happy if he can just inspire conversation. His sketches envision a cute, thirtyish-foot craft resembling more a motorboat than a sailing hull, with a freestanding rig and a square(ish) sail that folds into three panels, vertically or horizontally. I immediately envision wanting leeboards for reaching, but there goes simplicity, and this is no vision of future Olympic boats—Hoyt competed three times for Puerto Rico while assigned there as an advertising executive—but it conjures up a happier future on the water than anything we saw in ah, ah . . . 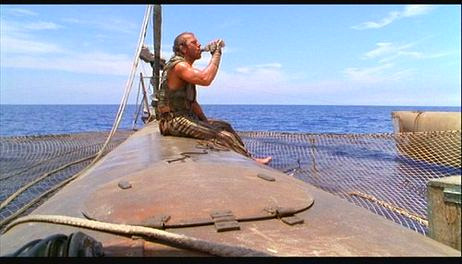 A touch overwrought, that, but even if the future we’re trying to avoid is not so cataclysmic, I liked unhearing that electric car. Decades ago Hoyt wrote a book called Go for the Gold and suddenly the entire sporting world had a new catchphrase.

Green is the new gold?