The Norwegian-flagged Star Islefjord departed Valencia, Spain in the darkness of a Spanish Friday night, a few minutes before 2 pm Friday, California time, carrying the America’s Cup winning trimaran, USA 17. The ship is on its way to San Francisco via the Panama Canal on a schedule to arrive on March 1.

The Oracle Racing team blog notes, “Upon departing Valencia the M.V. Islefjord will make a constant right-hand turn, one towards the Strait of Gibraltar, another after clearing the Panama Canal and a third to enter San Francisco Bay.”

I could add, another right turn at Telegraph Hill, to clear the Bay Bridge for Pier 80.

High winds hampered and slowed the loading of the 223-foot wing, and
we should say that the cargo includes the ACC monohull, USA 76, chase boats and the kitchen sink. Oracle Racing is moving to San Francisco. The photo is taken from the team blog. Get the new look . . . 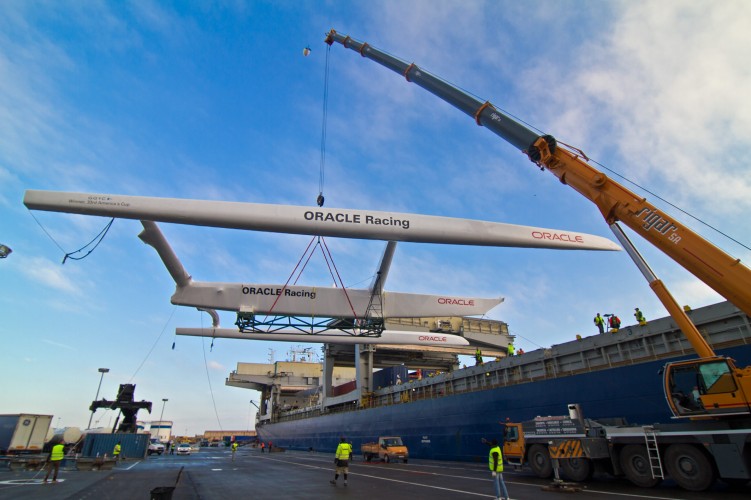 I’m counting on seeing this thing sail on San Francisco Bay, but not right away, and not a lot. Only a few people in the world are qualified to launch it or sail it, the doing will be outrageously expensive, and every component is critical one way or another. Think of it as the sailing equivalent of an SR71 Blackbird, where you don’t fly by the hour, you fly by the minute.

IT’S NOT SAILING, BUT IT’S OUR WORLD

What can one person do? As a revolutionary spirit spreads across North Africa like a wildfire, Al Jazeera traces the blaze to a single spark. Worth a read.

The Cruising Club of America has announced its newest honorees. The highest prize is the Blue Water Cruising Award. Here’s the word:

New York, N.Y., USA (January 28, 2011) – The Cruising Club of America (CCA) will award its prestigious 2010 Blue Water Medal to Australian Alex Whitworth for a circumnavigation of the world via the Northwest Passage West to East. The first Blue Water Medal was awarded in 1923 and it is given “for a most meritorious example of seamanship, the recipient to be selected from among the amateurs of all the nations.” The award will be presented on March 4, 2011 by CCA Commodore Sheila McCurdy during the CCA’s annual Awards Dinner at the New York Yacht Club in Manhattan. 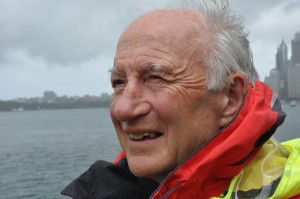 Whitworth was born in an air raid shelter on the island of Malta (Southern Europe) in 1942 and spent most of his childhood near Manchester, England or wherever his father was stationed at the time. His father, Alexander Whitworth, a Royal Navy pilot, taught him to sail at a young age. At nineteen, Whitworth also joined the Royal Navy and became an Observer on carrier-based Sea Vixen aircraft until 1965.

In 1966, Whitworth emigrated to Australia and joined Adastra Aerial Surveys where he worked both full and part time until 1975. In 1974, he received a B.A. (Honors) in Political Science from Melbourne University and in 1982 an M.B.A. from the University of New South Wales.

In 1993, Whitworth and his partner Hilary Yerbury purchased the sailboat Berrimilla, a Brolga 33 designed by Australian Peter Joubert. Since the purchase, Whitworth has circumnavigated the world twice with Berrimilla. The first time began in 2004 when Whitworth sailed to the U.K. via Cape Horn. On the way, Berrimilla was in frequent contact with Astronaut Leroy Chiao, Commander of the International Space Station (ISS) and for much of the time, Chiao was Whitworth’s nearest neighbor when the ISS orbit crossed her track. When Whitworth arrived in the U.K., Berrimilla competed in the 2005 Rolex Fastnet Race, finishing 11th overall and second in the double-handed division. After the Fastnet, Berrimilla returned to Sydney (Australia) via the Cape of Good Hope, arriving just in time to sail in the 2005 Rolex Sydney-Hobart race.

The second circumnavigation began in 2008 when as a result of Berrimilla’s encounter with the ISS, Whitworth was invited by NASA scientists to rendezvous at Beechy Island in the Canadian Arctic. The plan was to view the solar eclipse on August 1, 2008, so Whitworth set out on April 10, 2008, sailing directly from Sydney to the Aleutians (Alaska) and then through the Northwest Passage.

Due to dangerous ice conditions, Berrimilla bypassed Beechey Island and arrived in Falmouth (U.K.) in September. That winter, the boat was stored in the U.K. and then competed in the 2009 Rolex Fastnet Race. After the race, Berrimilla sailed home to Australia via the Cape of Good Hope and the Kerguelen Islands and arrived in Sydney on March 2010 having completed her second circumnavigation of the globe.

In addition to presenting its Blue Water Medal, the CCA will present the following 2010 Awards:

The Rod Stephens Trophy for Outstanding Seamanship awarded to Alessandro Di Benedetto (Rome, Italy) for his resourcefulness when jury rigging Findomestic, a 21-foot (6.5-meter) monohull, near the rounding of Cape Horn in 2009. Alessandro is known for his single-handed open ocean voyages and has been commended for the many records he has surpassed.

The Far Horizons Award was given to William E. Cook for a series of commendable voyages to the far north of the globe including cruises to Greenland and Baffin Island (Canada). Cook has been adventuring since the 1970s and his last cruise was to Greenland in 2010 on his sailboat Resolution, a 56-foot (17-meter) Bristol Sloop. At home, on the East Coast, Bill runs Cook Yacht Design which designs racing and cruising sailboats ranging from 10 – 85 feet.

The Richard S. Nye Trophy was awarded to Robert A. VanBlaricom who has brought distinction to the Cruising Club of America by meritorious service, outstanding seamanship, and outstanding performance in long distance cruising. He has been a member of the Club since 1964 and has served on many committees over the years. He has been awarded the John Parkinson Memorial Trophy twice for transoceanic passages; one was in a 39-foot (11.9-meter) steel-hulled sloop named Seabear, which he built with a partner. Bob has been awarded the CCA’s Charles H. Vilas Literary Prize, and the Royal Cruising Club Trophy. He has been Rear Commodore of the San Francisco Station of the CCA. As an author, he wrote and self-published his sailing autobiography, Time and Tide.