What Money Can Buy

Years ago I spent a day in a Goodyear Blimp, observing the Congressional Cup match races at Long Beach, California from what truly was the catbird seat. Room to walk around. The means to be anywhere on the race course. The leisure to dawdle. Pretty cool. 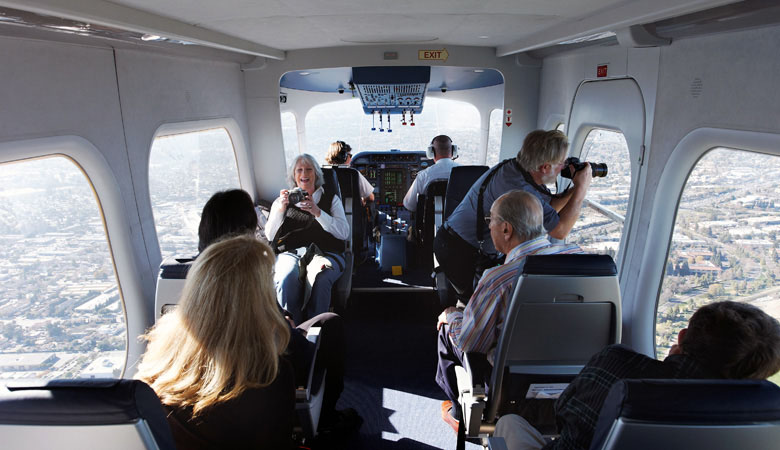 Aboard the airship Eureka. Photo by Airship Ventures

Now I find that Airship Ventures, which operates not a blimp but a zeppelin, one of the very few in existence, is carrying passengers for the viewing above the Congressional Cup course on Friday and Saturday. I don’t mind giving a little free advertising to what they are calling “the ultimate skybox” because I think that what they do is very cool. And when we have the America’s Cup on San Francisco Bay . . .

Airship Ventures operates in both Northern and Southern California, and there are many of things they offer, all at luxury prices, which probably means that zeppelins don’t come cheap. You can find them at airshipventures.com.

Despite myself I’m caught up in the drama of the nine storm-tossed boats working (a carefully chosen word) their way across the North Pacific from China to California on leg five of the Clipper Round the World race, with still a long way to go. Except for a professional skipper apiece, these matched 68-foot sloops are crewed by people who are paying handsomely for the privilege of getting the s___ kicked out of them. What’s special, though, is the level of support that’s running boat-to-boat and also coming from the event organizers. 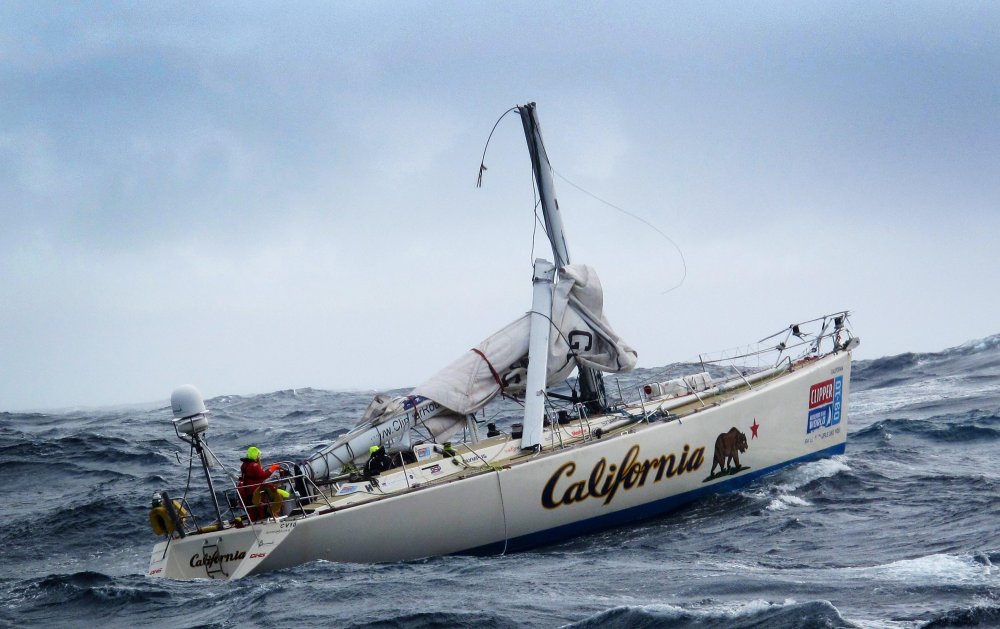 Since California broke its mast on Sunday, other boats have been escorting and ferrying-over water and fuel. Jamaica was first: “During daylight hours, California worked at setting up a jury rig, and we made several inter-boat transfers of diesel, water and other essential supplies across to California,” explained Jamaica Lightning Bolt skipper Pete Stirling. “This is a procedure that all the crews were trained in before the race start back in the Solent. Back then, it was a fairly simple procedure, performed in good weather conditions and something you hoped you would never have to do for real. The reality of doing it in the middle of the North Pacific in the winter, thousands of miles from the nearest land and in rough seas, is quite different.”

Uniquely Singapore has also contributed to the fuel transfers. As the organizers say, to be in such close company so far from land is a strange experience for all involved. While racing across an ocean, it’s unusual for boats to see each other between start and finish.

At present Hull & Humber and Spirit of Australia are performing escort duties—Jamaica is back to racing speed—pending the arrival of Edinburgh Inspiring Capital, which will accompany California the rest of the way to San Francisco, where a new mast will be waiting.

There’s another storm brewing, too.

Out in front of the fleet, with 1,100 miles to go, the skipper of Cape Breton Island, Jan Ridd said, “We have decided to hedge our bets, as there seems to be a conflict between the latest synoptic weather charts and the GRIB files. The synoptic charts show an enormous low developing behind our position and tracking east towards us but the GRIB files only show a small depression. We have decided to err on the side of caution and start drifting south whilst we head towards the finish. Looking at the synoptic chart we should be at the lower edge of the storm system and should not see more than 40 knots of wind.”

At this point, a piece of cake.

California and her escorts are 1,700 miles out of the Golden Gate. Team Finland, which broke its rig between Singapore and Qingdao, is 4,200 miles out and fighting headwinds. That boat obviously is not a candidate for the scheduled April 11 start for the leg from San Francisco to Jamaica, so the dates are being reviewed.

According to Race Director Joff Bailey, “For the crew onboard Team Finland and California and the race as a whole, it is far better that all nine boats start together from San Francisco, and as such the decision has been made to delay the race start. The new date is very much dependent on Team Finland‘s progress, but it currently looks like we will delay by five days to 16 April.”

Trade interests have trumped conservation at a UN wildlife conference at which proposals to step up protection for polar bears, bluefin tuna, coral and several kinds of shark all failed, delegates said. 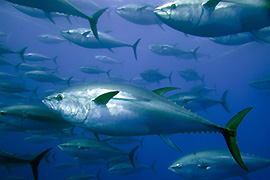 Economic concerns hampered efforts to restrict trade in several commercially lucrative marine species at the 175-nation Convention on International trade in Endangered Species (Cites), which wrapped up a two-week meeting in Doha, Qatar, on Thursday.

“As soon as big money gets involved, the ‘s’ of science is crossed out by two vertical stripes,” Willem Wijnstekers, the Cites secretary-general told reporters, meaning it becomes “$cience” spelt with a dollar sign.

Resistance from Asian countries, particularly Japan, to placing bluefin tuna on a protective list received most attention at this year’s meeting.

Stocks of Atlantic bluefin tuna, prized as a sushi delicacy in Japan, have plunged more than 80 per cent since 1970, according to Cites.