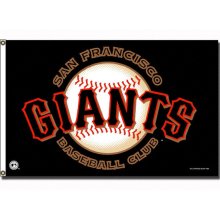 California Maritime Academy—a comfortable driving distance from AT&T Park, gratuitously noted— just never did fit into the regular run of college sailing. That was frustrating, but they’ve found their sweet spot or they wouldn’t be flying into France on Thursday night, to La Rochelle, to prep for Sunday’s opener of the Student Yachting World Cup. The key was a shift in focus. With a student body skewed toward guys, and some big guys at that, this small, specialized school at the mouth of the Sacramento River has a hard time fielding a versatile team for competing in 420 class dinghies—as in, not enough lightweight crew for light-air days.

In keelboats, however, Cal Maritime has gone large. Sailing Director Charlie Arms Cartee recalls, “It was Dave Dellenbaugh who suggested we take a shot at the services academy championship.”

That would have been 2003 and the Shields Trophy in Navy 44s. The result? Five wins since, plus a win—after twice losing on tiebreakers—at the 2009 Kennedy Cup Intercollegiate Offshore Series, the qualifier for a slot at La Rochelle, on the notoriously windy Bay of Biscay. Yep, going large. “The team has a charter boat to sail on Friday,” Cartee said, “and there are practice races on Saturday. That’s two days for the crew to sort themselves out and shake off nine time zones of jetlag.”

More lead time would be nice, but apparently there are professors at Cal Maritime operating under the assumption that a student’s primary obligation is to be a student. Tactician Sean Kelly allows, “As a team, let’s face it, we’re a bunch of college kids trying to sail like the pros, but we’ve been fairly successful.”

Kelly won the 2010 Laser Midwinters West. He’s a contender on the singlehanded dinghy circuit and a full-circle operator on the small-boat, big-boat equation. He says, “I can’t over-stress how much my small-boat sailing prepared me for racing keelboats. It keeps me comfortable. And I have to admit that now, big-boat sailing is helping me in a small boat where I’m doing it all, the trim, the tactics, the mojo. I find that I’m letting the Laser sail itself more, and I get my head out of the boat.” 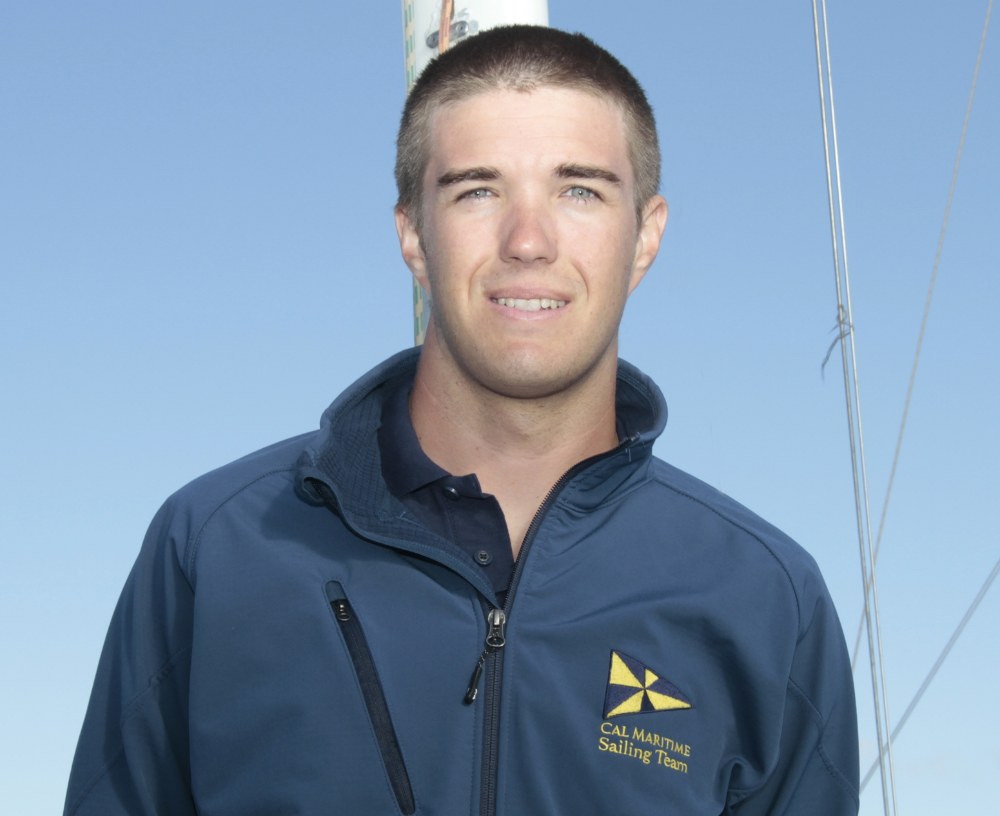 Kelly was in Texas racing the Intercollegiate Singlehanded Championship (he took second) while a CMA team was winning the Kennedy Cup, but he crewed with other team members on a J/105 in the Rolex Big Boat Series on San Francisco Bay in September while four other team members were off winning the Shields Trophy, again. (If time is nature’s way of keeping everything from happening at once, time and nature sure are doing a lousy job.)

“The Big Boat Series was humbling,” Kelly says. “I’ve been a small-boat sailor all my life, but when you’re looking at longer courses, sometimes you have to eat a few headers.”

Cal Maritime sailors spend a lot of time on San Francisco Bay, downriver from the school’s location at the mouth of Carquinez Strait. SF Bay is known as a windy place, which sets Cal Maritime up nicely for the Bay of Biscay, which odds-on is also a breezy spot. The team should feel right at home. We’ll be expecting whitecaps, not this look from the 2009 races at Marseille . . . 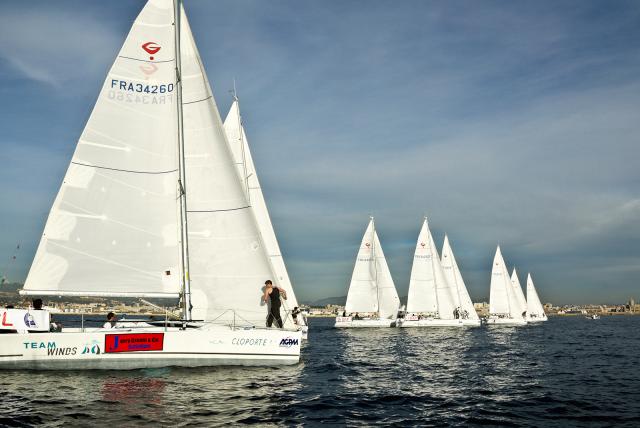 In 30 years, only one US team has ever won the Student Yachting World Cup, and Cal Maritime is the first West Coast school to earn a shot. Its people are billing this as a David and Goliath matchup, considering that CMA has only 850 students, and some of their opponents come from major universities with tens of thousands of students to draw from. On top of that, many members of the ten-person squad are signed into such heavy math-and-science curricula as marine transportation and facilities engineering.

A release from the school puts it this way:

Senior Marine Engineering major Sebastien Laleau, originally from Guatemala, admits that when he first came to Cal Maritime he had to shift his initial focus from making friends to concentrate on studies and sailing. Cole Davis, now his roommate, encouraged him to try out for the school’s offshore program. “I love it,” he says, “but it means practices just about every day, plus travel and competitions on weekends this fall. My days are a mixture of classes and studying, practice around 4:30, and then home for more studying each evening. I usually have a big breakfast and dinner so I have extra time to study during the day. When I get good grades on tests and quizzes it makes me feel great, but you really have to prioritize your time to keep up.”

Mechanical Engineering major John Gray of Santa Rosa, CA says he and fellow team members are working with professors to cover the fact that they will miss a week and a half of classes and labs while competing in France. “In some cases we’re able to take mid-semester examinations before we depart and in others we’ll wait and take them when we get back. I pretty much schedule my weekdays from 8 AM-6 PM here on campus, and when I am not in class or practicing, I am in the library studying.”

The course-load leader is Sara Himes of Placerville, California (class of 2013), who is carrying 28 hours as a dual major in International Business and Global Logistics and Global Studies and Maritime Affairs.

And unlike the guys, she is guaranteed to be sailing every day at La Rochelle, along with Jessica Bernhard.

Event rules for the Student Yachting World Cup will require at least two women in the crew, considering the makeup of the crew at the Kennedy Cup. Charlie Arms-Cartee says, “Note to self; take women to the Kennedy Cup.”

Looking at a weight limit of 530 kg, and knowing that the eight men on the team are too many, the goal for faculty/volunteer coach Jesse Cartee (yes, there’s a marriage involved) is to hit the right mix on the day, and try to make sure that everybody sails at least once. As Charlie Arms Cartee puts it, “We have more than one capable helmsman. Matt van Rennselaer [he drove the Shields Trophy win] and John Gray, for starters. There’s a night race at the world cup, so we can have a fresh driver if needed.”

Racing is in 30-footers. The competition comes from Canada, England, Ireland, France, Switzerland, Germany, Italy (two, with CUS Milano the defending champion), Portugal, and Japan.

This btw, is Cal Maritime’s other ride, the training ship Golden Bear . . .