Historical changes are afoot, in a subtle way, along the San Francisco cityfront. The club that won the America’s Cup in a multihull—the first challenger ever to do that—is adding multihull divisions to its annual regatta for the first time.

We’re talking the 40th running of Golden Gate Yacht Club‘s Manuel Fagundes Seaweed Soup Regatta, a series of five race days, one per month beginning on Saturday and continuing to March. The late Manny Fagundes was one of those beloved employee-godfather figures that appear from time to time at one yacht club or another, and in a sense, Manny Fagundes won the America’s Cup. It’s his namesake regatta that is sailed annually “on an arm of the sea,” thus rendering GGYC qualified to challenge Alinghi for the Cup.

As a further evolution of history, I’m pretty sure that 2010 will be the last year in which GGYC’s page in the Pacific Inter-Club Yacht Association Yearbook identifies it first and foremost as “Trustee for the World Famous Seaweed Soup Perpetual Trophy.”

Although, Manny, I guess you’re on your way now. Manny was both a club member and the club manager, famous for helping everyone, all the time, big time. His genuinely famous soup—locally famous, if not worldwide—is remembered as a heavy minestrone with extra spinach. Thus, “seaweed.” And I figure the club’s new 100-foot dock will be a great help hosting the hungry, thirsty hordes of post-race visitors in this 40th edition, whether the kitchen is still serving Seaweed Soup or not.

A number of clubs around San Francisco Bay host these “midwinter” series, as they called, and they’re popular for giving everybody a chance to relax a bit, maybe take on more learner-crew than they would in the summer season, and joke about how it’s finally time to enjoy sailing warm.

That is, in winter, we lose the dramatic pressure differential between a superheated central valley and a current-chilled ocean, separated by the Golden Gate venturi. On a sunny winter day, the venturi might yield a mild seabreeze—nothing like those summertime boomers—but there is more likelihood of sailing in whatever weather system is passing through, or not sailing in whatever weather system is not passing through. The Seaweed Soup races are sailed in some of the most current-ridden waters of the bay, so the savvy among us make sure the anchor is not merely ready, but ready, baby.

PHRF classes plus one-design racing for WETA tris. Should be good. And I bet, in the monohull ranks, Hank Easom will be back for the umpteenth time with Yucca . . . 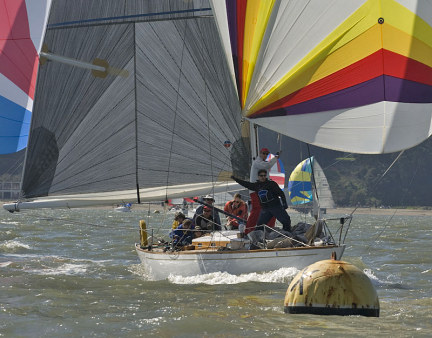